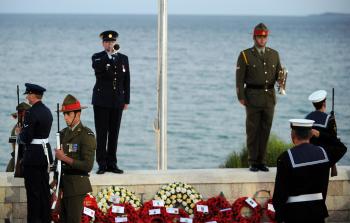 Australian soldiers stand guard as as a bugle is played during a dawn ceremony at Anzac Cove where the first battle was fought in Gallipoli. (Burak Kara/Getty Images)
US

By James Burke
Print
It was not difficult to find evidence of the fighting that took place along the small stretch of the Dardanelles known to many Australians as Gallipoli. Half a bayonet, buttons, bullet heads, numerous smashed clay jars, much rusty tin and wire were some of the things we came across.

In 1992 an April visit to this part of Turkey was a lesser event compared to today’s massive Anzac Day commemorations held there. Seventeen years ago there was no parking lot nor roads that sliced through the geography, and no drunken behaviour.

Not to miss the dawn service, three of us slept on a pebbly Anzac Cove. As the sun rose, it was evident that several hundred young Kiwis and Aussies, some officials and a few curious Turks were attending the dawn service as was a WWI veteran named Tom shook everyone’s hand.

Small groups and individuals then hiked over steep hills and through eroded gullies, stopping at well-maintained Commonwealth grave sites and paying their respects; reading the names and ages of the dead.

It was difficult to comprehend the awful reality of the fighting between the Anzacs and “Johnny Turk”. A fellow, a radiologist in his 30s from Sydney, pointed out pieces of human bone in the dirt.

Continuing on, groups or individuals paused at areas of significance, such as the Nek where, during a “feint” attack, 650 Light Horsemen were killed within minutes in an area seemingly no bigger than a tennis court.

From where we stood, the Nek offered a fair view of Sulva Bay where British troops had landed and for whom the Light Horse’s action was part of an August offensive designed to distract the Turks.

Also, to the south of Anzac Cove, the “Poms” had positions that they had held since the first days of the campaign, as did the French, who were further south again. The Allies shared the same predicament; they only had a tenuous foothold on the Dardanelles, one that would be eventually abandoned.

While over 8000 Australians died at Gallipoli, it has been said that the campaign had little if any influence on the course of the war. However, the Anzac legend has eclipsed any strategic military meaning. In the decades to come, more Australians and New Zealanders will continue to peacefully visit this part of Turkey.