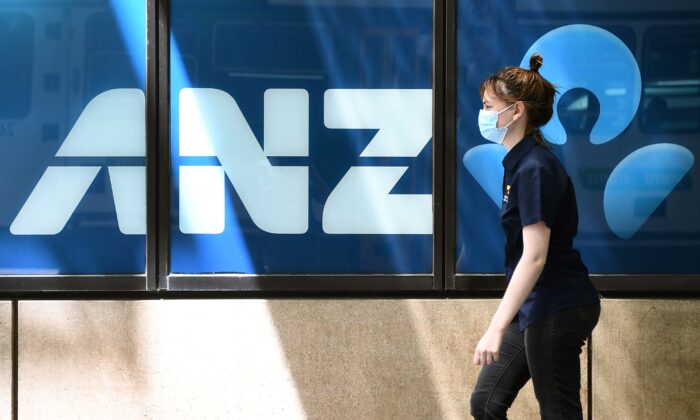 A woman walks past an ANZ Bank in Melbourne on October 28, 2021. (William West/AFP via Getty Images)
Australia

The ANZ bank will allow transgender and gender-diverse staff in Australia and New Zealand to take six weeks of paid leave and up to 12 months of unpaid leave so that they could affirm their gender.

The bank, which is Australia’s second-largest by assets with more than 40,000 staff globally, announced on Monday that the leave will benefit employees who are undergoing “any aspect of gender affirmation including social, medical, and legal gender affirmation.”

ANZ’s Diversity and Inclusion Lead, Fiona MacDonald, said the scheme was part of the bank’s ongoing commitment to the LGBTIQ+ movement and a step towards creating a more “inclusive culture.”

She said the move is “especially important,” while claiming that trans and gender diverse people “are more likely to experience lower incomes and employment rates.”

“The six weeks of paid leave means people who are affirming their gender do not need to exhaust their annual or sick leave entitlements, while also easing some of the financial pressures,” MacDonald said.

The big four banks said in a statement on Monday that an individual can affirm their gender identity in “many ways,” and the extended leave was meant to “recognise the process needs time and is not the same for everyone.”

According to ANZ’s press release, examples of social affirmation are changing of pronouns and/or names and adopting the clothing style that “better aligns with their gender identity”; medical affirmation includes surgery, hormone therapy, medical appointments, and recovery from medical procedures; and legal affirmation includes legally changing the name and/or gender marker on personal identification documents.

On its website, ANZ declares itself as “a leading employer for LGBTQ+ inclusion” which has claimed several titles by the Australian Workplace Equality Index, a framework that measures Australian businesses’ level of LGBTQ+ “workplace inclusion.”

The bank is a member of the Welcome Here Project by the government-funded LGBTIQ+ group the AIDS Council of NSW (ACON). Businesses participating in the project would need to display a rainbow sticker in a prominent place to demonstrate their support for the LGBTIQ+ cause.

ANZ, a signatory to the UN Standards of Conduct for Business Tackling Discrimination against LGBTIQ+ people, is a close partner with Sydney Gay and Lesbian Mardi Gras, Transgender Victoria and Intersex Human Rights Australia.

The move comes three weeks after Australian supermarket giant Coles announced it will allow trans and gender-diverse staff to take up to 10 days of paid gender affirmative leave.

David Brewster, Coles Chief Legal and Safety Officer and chair of the company’s Pride Steering Committee said in a statement released on May 19: “We know that we have at least 900 team members who identify as transgender or gender diverse.”

“We need to have proper policy and education in this area so there is clear guidance around taking leave for this important transition in their life.”