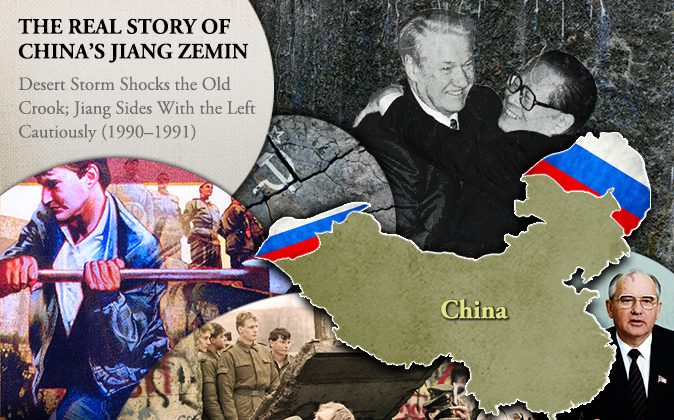 Anything for Power: The Real Story of China’s Jiang Zemin – Chapter 6

The war in the Persian Gulf between the United States and Iraq broke out one year after Jiang became General Secretary of the CCP. The victory of the U.S. in Operation Desert Storm prompted Deng Xiaoping to reconsider the direction of China’s development.

When Iraq invaded Kuwait on Aug. 2, 1990, the entire territory of Kuwait was occupied within but a day. Iraq’s invasion triggered acute reactions in the international community. Western countries, led by the U.S., carried out a military action, via a United Nations resolution, to counter Iraq’s invasion. Even though Iraq’s dictator Saddam Hussein was a good friend of the Chinese Communist Party and Iraq and China had a close relationship, China was isolated from the international community at the time and didn’t want to offend western countries by supporting Saddam Hussein.

Jiang Zemin had become General Secretary because of his participation in the 1989 Tiananmen Square Massacre against the students. His nicknames “Kericon” and “braggart Jiang” bespoke of his lack of competence on matters beyond sweet-talking, showing-off, and reporting on others behind their backs. The Gulf War was a real test to examine what difficulties Jiang could resolve.

Facing a challenge as major as this, Jiang panicked and knew not what to do. He began to sense then and there that holding the position of General Secretary wasn’t always enjoyable. At that time Western countries had imposed economic sanctions over the Tiananmen Square Massacre, and China had little international support. To escape from the diplomatic quandary, Deng Xiaoping set forth the basic principles of China’s position on the war, which were, in effect, “To shut up and stay hands-off.” Thanks to Deng’s order, Jiang didn’t need to make a decision. China subsequently abstained from the UN vote on the Gulf War.

On Jan. 17, 1991, UN troops led by U.S. military forces launched “Operation Desert Storm” against Iraq. Within weeks, Saddam Hussein’s troops suffered heavy casualties and completely lost the power to fight back. Iraq was forced to accept all 12 of the resolutions that the United Nations had passed since the Iraqi invasion of Kuwait. The multi-national UN forces called for a cease-fire at midnight on Feb. 28, marking the end of the 42-day Gulf War.

During the war, China’s newspapers, which were, and are, tightly controlled by the Chinese Communist Party, covered extensively strategic analyses stating that Saddam had a good chance for the reason that he was “on the side of the people,” and that the guerilla warfare would be prolonged. Some even predicted that the U.S. troops would be trapped in Iraq, similar to what happened during the Vietnam War. To China’s surprise, the multi-national forces led by the U.S. coordinated their satellite, aerial, and naval technologies to enable a three-pronged, joint assault. The advanced weaponry and precise coordination amazed the world.

The victories of U.S. forces with minimum casualties taught Deng Xiaoping a lot and shocked the highest echelon of the CCP. Public outcry also followed, calling for China to arm its military with high-tech weapons. Jiang Zemin, who had no military experience, was at a loss and didn’t know how to respond.

Jiang was terrified, in fact. His knowledge of the military strengths of the United States and China was out of touch with the times; his knowledge was more that of the Korean and Vietnam wars.

He recalled Richard Nixon’s book, 1999: Victory Without War (published in 1988). Jiang thought that Communist China had fallen far behind the United States in terms of both morale and military strength. With the drastic regime changes in Eastern Europe, the Cold War was approaching an end. The wave of democracy had been moving eastward and would soon reach China, with only the Soviet Union in between. In the face of heavy pressure to democratize, the red empire led by Gorbachev looked prone to collapse at any moment. If the United States continued its Cold War strategies or carried out military attacks, with its much-admired political and economic systems and advanced weaponry, China’s one-party autocracy would be toppled.

Jiang felt helpless when dwelling upon the world’s state of affairs. He had a message sent to his son Jiang Mianheng, who was studying in the United States, that there was no need to rush his studies in order to graduate. He told his son to find a job and stay in the U.S. for several more years. That was in part because Jiang’s position in China’s central government was not fully cemented at that time, and partly because he had no confidence in the future of the Chinese Communist Party.

2. Fawning on the Soviet Union

From the time of the Tiananmen Square Massacre of 1989 on, the United States, which led the world in system engineering and integration, imposed an arms embargo on China; China had little experience in system engineering and integration. However, it was not hard for China to recruit experts in the field. For example, Russia’s languid economy allowed China opportunities to lure Russian professionals by means of hard currency. Approximately 1,500 Russian scientists and technicians started working as consultants for China’s military in the 1990s.

Under the watchful eye of Deng Xiaoping and Yang Shangkun, Jiang Zemin, despite being a layman in military affairs, had to demonstrate competency as the Chairman of the Central Military Commission. He announced plans to purchase high performance, state-of-the-art weaponry systems from Russia. Although China spent huge sums of money to acquire them, all of her acquisitions proved to be obsolete weapons discharged by the former Soviet Union, or weapons that performed poorly and that Russia was clearing out. The warplanes received from Russia failed frequently. After the CCP started its purchase of Soviet-built warplanes (including Su-27s and Su-30s), in the years between 1997 and 2001 no less than five accidents were reported.

Russia’s aircraft carrier Kiev was built in 1975 and retired from active duty in 1994. Jiang Zemin bought it and welcomed it into Tianjin Harbor in September 2000 as an invaluable treasure. Sources said China spent two years negotiating the purchase and borrowed 70 million yuan (US$8.4 million) to finance the retired carrier. The experts thought that they could obtain technical information by examining the Kiev. However, they realized that Russia had stripped it of everything worth learning from. There was an outcry in the military over their being fooled, and they filed complaints to Deng and Yang. Jiang Zemin, who was in charge of the clumsy deal, grew even more nervous than Deng and Yang. The chairmanship of the Central Military Commission was a tough job for Jiang. Jiang himself once described it as “treading on thin ice.”

The Soviet Union’s economy was sluggish at the time. It was using military force to suppress people in its various states, and it faced serious problems domestically and internationally. To upgrade its military equipment and show support for the Soviet communist regime, China in October 1990 decided to pursue military cooperation with the Soviet Union and purchase a batch of new warplanes from the Soviet Union. On Jan. 25, 1991, the spokesman for the Chinese Ministry of Foreign Affairs told reporters that Jiang would make a state visit to the Soviet Union in May of the same year. Jiang became the highest Chinese government official to visit the Soviet Union since Mao Zedong attended the celebrations for the 40th anniversary of the “October Revolution” in Moscow in 1957.

When Jiang was in the Soviet Union in 1991, Yeltsin, an important political figure for the reformists, requested to meet Jiang but was turned down. Instead, Jiang met with the Soviet Union’s Vice President, Gennady Yanayev, who was against the program of reforms, and told Yanayev that he hoped the Soviet Union would go back in the direction of socialism. This event clearly reflected Jiang’s Leftist stance against reform. Three months later, Yanayev played a key role in the attempted political coup that put Gorbachev under house arrest. The coup, intended to reverse the reform and restore Moscow’s centralized control of the republics, failed after three days.

To strengthen relations with the Soviet Union and solidify his political power, Jiang tried to please the Soviet Union (and later Russia) at all costs. He was totally negligent when it came to the boundary dispute between China and Russia, and agreed to the Russian proposal to survey the border. By way of the KGB’s meticulous arrangements, Jiang’s ex-lover showed up. Jiang knew, seeing this, that the KGB had information on all of his activities in the past, and so he obediently yielded to Russia’s terms. As a result, disputed territory 40 times the size of Taiwan was secretly ceded to Russia.