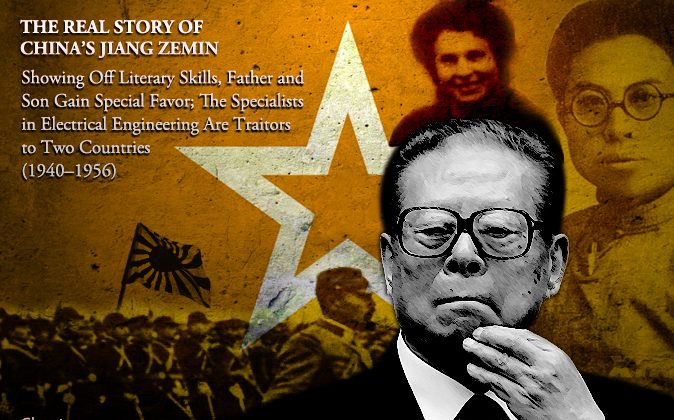 Anything for Power: The Real Story of China’s Jiang Zemin – Chapter 2

Jiang Zemin likes to give people the impression he is skilled at song and dance. He can play several musical instruments, among which are the piano, the erhu, and the guitar. Such is Jiang’s drive to show off musical ability that he often loses sight of propriety. One such occasion was March 30, 1999, the date on which Jiang visited Mozart’s hometown of Salzburg accompanied by the President of Austria, Thomas Klestil. The most valuable item in Mozart’s former residence was a Vienna piano that was purchased by the maestro himself in 1785. After the president introduced the 200-year-old antique, Jiang dashed to the piano, plopped down on its stool, and opened the piano, eager to play. Now, had he played some of Mozart’s representative works, such as Don Giovanni or Marriage of Figaro, the scene could have been read as one of fond reminiscence or even tribute. But Jiang, much to everyone’s surprise, started to play, rather inappropriately, a Chinese song—”Wave Upon Wave in the Honghu Lake.” [1] President Klestil, visibly uncomfortable, clearly wished not to let Jiang touch the maestro’s precious antique but was bound by diplomatic etiquette to stand aside. Jiang obliviously played on, casting all the while furtive glances at the several Chinese dames then present, hoping to win their admiration.

Intoxicated by his own show of musical prowess—a spell that drove him even to play Mozart’s grand piano—Jiang hardly seemed to realize that in his antics was suggested the true history he shared with his father: two generations of treachery.

A family that could afford piano lessons, much less sending their child to a private high school and then Nanjing Central University, during the years of Wang Jingwei’s puppet regime (1940-1944) was anything but typical.

Jiang Zemin’s father, Jiang Shijun, went to seek refuge in Nanjing in 1940. At that time the puppet government was run by three magnates: Wang Jingwei, Chen Gongbo, and Zhou Fohai. Among the three, Chen Gongbo and Zhou Fohai had both been founders of the Chinese Communist Party (CCP) and members of the CCP’s 1st Congress; both had ranked higher in the CCP than even Mao Zedong.

When in 1940 Wang Jingwei set up the puppet Japanese government in Nanjing, he was in need of much manpower and a range of talents, from ministers to clerks. It was for this reason that brazen intellectuals, crooked merchants, jobless has-been politicians, and former officials swarmed to Wang. Wang’s Nanjing residence was crowded in those days with cars of every sort, from trendy streamlined 1940s models in gray, blue, red, or green, to old-fashioned black and white cars with a sleeping spot. Visitors came from luxurious mansions along the Qinhuai River, from Xuanwu Lake in Nanjing, from West Lake in Hangzhou, from Shanghai, Suzhou, Wuxi, and Yangzhou. They gathered in Nanjing from all directions, appearing almost out of nowhere. Thus it was that the dregs of society gained the upper hand and vied fiercely to get ahead, seizing the opportunity afforded by Wang’s regime. Shamelessly they curried favor with the powerful. Among them was an intellectual figure from the business community named Jiang Shijun.

Jiang Shijun was a slick opportunist who played to the rich and the powerful. In those years the invading Japanese army was strong militarily, attacking China in the northeast, due north, and center and pressing all the way to Shanghai, Wuhan, and Guangzhou. Soon afterwards Hong Kong, Manila, and the South Pacific islands fell in turn to Japan. While towards the end of 1941 Japanese Admiral Yamamoto Isoroku had wiped out the bulk of the United States’ naval fleet and air force in Pearl Harbor, the central government of Chinese Nationalist (KMT) leader Chiang Kai-shek was using old Hanyang rifles and broadswords to fight Japanese airplanes and tanks. Many Chinese believed that the loss of national independence was imminent and thus sought work with the invading Japanese. Meanwhile Jiang Shijun, ever the shrewd businessman, was busy taking precautions lest the KMT stage a comeback and someday defeat the Japanese; he feared his work for the Japanese could come back to haunt him. Thus reasoning, Jiang abandoned his original name in favor of the alias “Jiang Guanqian.”

Both literature and electrical engineering were hobbies for Jiang Shijun, and he devoted much time to the two pursuits. Jiang Shijun had also made a careful study of Nazi propaganda tactics and took especially to Leni Riefenstahl’s documentary film, Triumph of the Will; the film is famous for casting Hitler, through the sophisticated use of artistic techniques and religious motifs, as almost a divine figure. In the first few years after Hitler came to power, Germany’s GDP grew rapidly, doubling annually—a feat which seemed indeed a “triumph of the will.” Riefenstahl directed another film, Olympia, which documented the 1936 Nazi Summer Olympics and strategically turned the games into what has been called a “fascist ceremony.” The artistry of the films managed to entrance countless German youths.

Jiang Shijun was in charge of daily operations in the Ministry of Propaganda of the puppet central government, and in this capacity applied in the form of fascist propaganda all that he had painstakingly gleaned from his extracurricular readings. Well did Jiang understand the power of media. Although he was busy with his job every day, Jiang always found time to “earnestly and tirelessly” teach his son Jiang Zemin. When many witnessed Jiang Zemin shut down the liberal World Economic Herald in advance of the 1989 Tiananmen Square Massacre, they took the closing, quite wrongly, to be fortuitous. Rather, the incident bespoke of just how well Jiang Zemin knew the power of media—a weapon he had come to understand before he was even 15 years old. His maneuvering ahead of the Massacre merely reflected that he had absorbed many propaganda theories from the Party, become increasingly politically adept, and come to have ever more opportunities to put those theories and lessons into practice as he climbed the ladder of the CCP hierarchy.

Jiang Shijun single-handedly organized a so-called “Exhibition of Military Successes in the Pacific Region of the Great Crusade in East Asia” in which he applied the propaganda techniques he had learned and his knowledge of electrical engineering so as to depict, fully with sound and light effects, air and naval warfare between the U.S. and Japan. The scenes vividly simulated Japanese troops opening fire and downing U.S. planes, which landed with a crash. A huge oil painting—”Striking Pearl Harbor”—occupied an entire wall in the exhibition hall. In the painting battle clouds covered the sky as Zero Fighter planes dived down, took off, and landed like a swarm of mosquitoes, suggesting the Japanese army’s Bushido spirit and symbolizing the “permanent military power” the army enjoyed, having been blessed by the goddess Amaterasu Omikami. Through all of this the audience would be given the impression that the Japanese invaders were unconquerable and would forever occupy China; “annihilation” of the United Kingdom and “destruction” of the United States seemed just around the corner.

Along with this Jiang Shijun helped plan the production of A Legacy That Will Live Forever, a movie the goal of which was to bash Britain and America. Using a large sum of money Jiang solicited the help of a famous director and further invited movie star Gao Zhanfei to play the part of Qing dynasty official Lin Zexu. The effort masticated history as we know it so as to suit the needs of the Japanese forces and incite hatred against the United States.

Jiang Shijun also learned to employ folk-style propaganda, and found in it means to falsely suggest peace and prosperity in the aftermath of, and so as to help people forget, the terrible Nanjing Massacre [2] of only a few years before. One telling example is how he reworked a Buddhist folk tradition, the Feast of All Souls Festival, for his own purposes. Jiang organized one year a grand version of the festival that had, as usual, lanterns floated on local waters, but with this time newspapers making much fanfare of the lotus lanterns and flowers floating atop the green waves of the Qinhuai River and Xuanwu Lake. Nanjing residents flocked to the shores and to the Temple of Confucius to enjoy the sight. Spectators taking in the scene unwittingly played into Jiang’s hand, being anaesthetized and thus misled, as it were, to the grim historical realities, so recent still, perpetrated at the hands of the Japanese regime.

The propaganda department Jiang Shijun headed composed popular songs for children, knowing full well that brainwashing should start with the young. Jiang thus used lyrics such as “The sword is as powerful as lightening, the spirit as lofty as the rainbow—let us fight for prosperity” to teach children that killing was acceptable and war a valid means to prosperity and power. Meanwhile, lyrics like “Traveling thousands of miles, the wind blowing fierce” sought to extol the invading Japanese army for having surmounted countless challenges while advancing into Asia and traveling so far, amidst adversity, while bravely sacrificing their lives for the “liberation” of East Asia. He published a children’s picture book, titled “A History of British and American Aggression Against China,” intending to stir up hatred toward the two nations while eulogizing the “Greater East Asia Co-Prosperity Sphere” [3] and promoting the idea of “Together make great efforts, people of Asia, to annihilate Britain and destroy America and meet with complete success.”