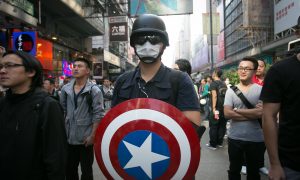 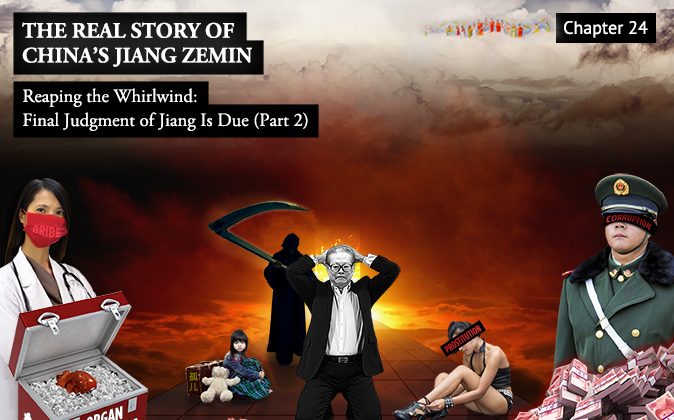 Anything for Power: The Real Story of China’s Jiang Zemin – Chapter 24 & Epilogue

Reaping the Whirlwind: Final Judgment of Jiang Is Due (Part 2)
By Epoch Times Staff
biggersmaller
Print

Chapter 24: Reaping the Whirlwind: Final Judgment of Jiang Is Due (Part 2)

Education is the backbone of a nation’s long-term development, something given great care and attention by governments near and far, old and new. Troublesome it is, then, that in the 10-odd years Jiang Zemin held power, upheaval and crisis plagued China’s education system.

Decline of the Educators

Teachers in their task of educating the youth could be likened to engineers of the spirit, persons who purify and shape minds and souls. As Han Yu, the great Tang Dynasty literati said: teachers shoulder the responsibilities of transmitting wisdom, imparting knowledge, and resolving doubts. The idea being, teachers should be exemplars of virtue. But in the Jiang Zemin era, China has witnessed quite the opposite. The quality of teachers has deteriorated rapidly.

Nowadays many teachers put little care into the teaching of their students. Instead they see in their positions avenues to personal gain and power. Some even generate “income” by dishonest means. Schools used to be clean institutions that turned little profit, while now they have become one of China’s most lucrative and corrupt public sectors. So common is it to see teachers involved in admissions scandals, forged diplomas, and episodes of plagiarism that these now hardly count as news.

Telling is the unthinkable episode took place at Nanjing Normal University, for example, in 2004, involving the exploitation of female students. When several high-ranking officials from the Ministry of Education came to inspect the university, school administrators forced 10 female students from the Dance Choreography Department to set their studies aside and dance with the officials. The officials acted so indecently that most of the women fled the scene after the dance finished. The incident created an uproar on campus. During an interview with the press, one professor called the incident a microcosm of China’s declining standards for social interaction, to which even institutions of higher learning are not immune. He said, “The sole intent of the university’s administrators was to please those top officials, as they can have much influence on the development of the university.”

Shocking is the discrepancy between what the school system intends, with teachers imparting knowledge, and reality. China’s schools are apparently now home to a deplorable number of predatory teachers, who target the children left in their care. A number of female students have become pregnant after being raped by their teachers, with others being scarred for life and alienated by the violation. Some teachers have even taken to murdering their students after failing at attempts to violate them. Some of the victims are young girls. Abuses as serious and pervasive as these were unheard of in the past.

In 2003 media in China reported that an elementary school teacher from Dazu County of Chongqing City raped, in the years 2002 and 2003, 10 young girls who were in his class. During the second semester of 2003 in Longxi County, Gansu Province, a physical education teacher began the rape of 12 9th grade girls, alleging he was helping the students in their wish to enroll in senior high school. Two of the victims became pregnant.

From September 2002 to March 2004, a 51-year-old teacher at Zhongyang Elementary School in Hekou township, Guizhou Province, raped 12 female pupils for a total of 42 times and molested 16 pupils for a sum of 35 times. Within roughly one year’s time, the vast majority of the female students in his class became victims of abuse—abuse despicable and inhuman. Out of the 19 girls in his class, only three escaped his abuse.

In June 2004, it was discovered that an elementary school teacher from Linxia County raped and molested nine female pupils in the third grade multiple times within a span of one and a half years. Some individuals were even abused dozens of times. The oldest victim was under 15 years old, the others all either 9 or 10. In Nanxing township of Zhanjiang Province, the Principal of an elementary school, Lin Dengping, sexually violated students seven times in a span of three months. He raped 11 girls at his school. The youngest victim was only 10 years old.

Perhaps more disturbing still is that under the Jiang Administration cases such as these have gone from being rare, isolated, outbreaks to a widespread phenomenon in the Chinese educational system.

The well-known educator Tao Xingzhi once said that the top priority of teachers is to teach people ethics, while the top priority of students is to learn the principles of life. He said, “The most important thing to teach is to teach how to be honest,” and “the most important thing to learn is to learn how to be an honest person.” He has also said that solid moral values are essential for people to have. Without these, everything else counts for naught.

At present, in China, this pervasive erosion of moral values in daily conduct exhibited by administrators and teachers is taking a huge toll on the students’ growth and development. Without moral teachings to guide them, many are going through life like rudderless boats in a turbulent sea. In the schools kids no longer learn about moral values, respect for human life, or caring for their fellow human beings.

In February 2004, a high profile murder happened at Yunnan University. A student named Ma Jiajue nonchalantly proceeded to murder a classmate a day in the dormitory. Ma fled after killing the fourth student and was later caught in Sanya City, Hainan Province. The case caused quite a stir. Ma explained away the murders, saying, “I truly got lost and had no idea how to live on.” While an act as extreme as committing murder out of a feeling of hopelessness or hatred is rare, the state of mind behind it—feeling lost—is not rare anymore. And it is here that we see the failure of China’s educational system reflected most clearly: in the teaching of ethics and values. A young student’s mind is something of a blank slate, lacking certain morals basic to adults. He hasn’t a sense of life’s meaning, he doesn’t have larger goals yet, and isn’t able to solve problems on his own. Students don’t treat each other with kindness, and often have hatred toward one another and act out of aggression. How could persons of this character be expected to contribute to China and bring hope to China’s future?

All of these problems are closely bound up in how leaders in the education system lead. The head Party official in the Ministry of Education is Chen Zhili—a married woman who has been carrying on an affair with Jiang Zemin for some two decades. Chen’s immoral behavior and disgraceful past in Shanghai have spelled tragedy for education in China.

In parallel with the practices Jiang Zemin and his son have used to embezzle China’s public funds, schools across the nation have, in the Jiang Zemin Era, similarly become bent on profiteering. Schools continue to make fortunes off of students by overcharging them, despite repeated prohibitions against this. On Dec. 16, 2003, China’s National Development and Reform Commission told a press conference that in 2003 alone, some 12,600 cases of students being overcharged were uncovered in a probe, with the amount of funds involved as much as 2.14 billion yuan (US$257 million).

A director of the Commission stated that overcharging on tuition and fees is a problem now common to all of China’s educational institutions, ranging from elementary schools to high schools, universities, and even administrative departments, with a range of unlawful means being used. Large sums of money are involved, and the problem continues despite investigations.

Some institutions’ management cite “budget shortfalls” to justify charging outrageous fees that go directly into their pockets. Sometimes, the administrators cut normal fees as a part of their “reform,” only to more than make up for it through special charges later on. Over the short span from January 2001 to September 2003, the Southern China University of Technology overcharged students who failed the exams fees of as much as 3.1 million yuan (US$372,000) to repeat the course. In China, even middle schools and elementary schools have become profitable entities. Education is looking ever more like a business, what with things like prestigious schools gaining many sponsors and charging students’ parents “school-selection fees” to make their children eligible for attendance—all as a means to unlawful wealth. The school-selection fee of a top elementary school in the northern city of Harbin is as high as 35,000 yuan (US$4,200), while that of one high-profile elementary school in Beijing has been hiked to 7,000 yuan (US$8,400).

High tuition and fees deny students from poor regions and families the opportunity to attend school. Some poor families are plunged into heavy debt, in fact. Some parents even commit suicide over the guilt attached to not being able to afford their children’s tuition.

In 2002, when a man surnamed Ding from Baoji City, Shanxi Province, saw his son’s admission letter from Fudan University and a detailed tuition bill of more than 7,000 yuan, the shock and pain was so great he jumped to his death from a seventh-story window.

In 2003, Jing Tongshi, 53, a farmer from Yulin Nanjiao Ranch in Shanxi Province, committed suicide by consuming pesticide right after his second daughter was admitted to Northeast Normal University and his third daughter and second son were recommended for admission to prestigious senior high schools.

On Aug. 6, 2003, Chen Nenggen, a 40-year-old farmer of Aimin Village, Jiangsu Province, committed suicide by consuming a bottle of pesticide after failing to raise enough funds for his daughter, Chen Xia, to attend a vocational school to which she had been admitted.

Su Tianjiang, a graduate of Shandan First Senior High, left the world in similar pain. After taking the National College Entrance Examination in 2003, he was admitted to a university. Owing to his father having chronic illness, Su and his family were in dire economic straits and couldn’t afford the tuition. The pressure was just too much, and hopelessness set in. Su then hung himself in his home.

What should have been a happy, triumphant event—gaining college admission in China’s extremely competitive system—in these and many other cases proved, tragically, to be the family’s fatal undoing. No wonder one attorney exclaimed that school was supposed to be a place that educates people, not takes their lives. And yet, of all things, the scenario’s depicted above have become common.

According to China’s official statistics, students have been overcharged as much as 200 billion yuan over the past 10 years. Overbilling has been among the top price complaints nationwide for four consecutive years. The Ministry of Education, headed by Chen Zhili—a trusted aide of Jiang Zemin—has become the target of public criticism. On March 18, 1998, at a State Council-led meeting attended by presidents of institutions of higher learning, the presidents of many leading universities that are under the Ministry of Education’s supervision—including Qinghua University, Beijing University, Zhejiang University, and Fudan University—jointly requested that Chen Zhili be removed from her position as Minister of Education. It never happened, however. Some five years later, in March 2003, when Chen’s term was finally up, the failed Minister of Education was unexpectedly promoted—reportedly for her absolute allegiance to Jiang Zemin in suppressing the Falun Gong, among other things—to the State Council herself. There, of all things, she was given the responsibility of supervising the nation’s educational affairs.