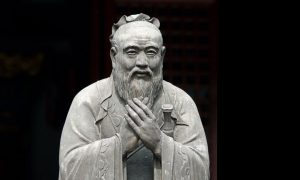 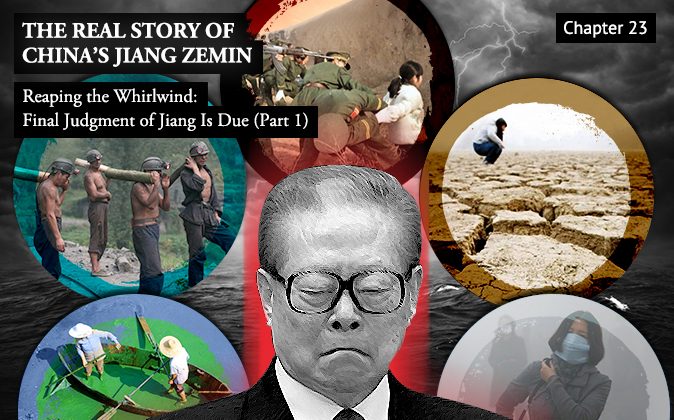 Anything for Power: The Real Story of China’s Jiang Zemin – Chapter 23

Chapter 23: Reaping the Whirlwind: Final Judgment of Jiang Is Due (Part 1)

While danger may be a frightening thing, not seeing danger coming is even more frightening.

While danger may be a frightening thing, not seeing danger coming is even more frightening.

During the years that Jiang Zemin was in power, every aspect of Chinese society began to experience crises. With the current façade of economic prosperity at hand, how many people have truly realized the danger in which Jiang has put Chinese society?

When a Chinese website introduced the misleading biography written by Kuhn, The Man Who Changed China: The Life and Legacy of Jiang Zemin, it emphasized that Jiang’s “merits and achievements” lay in “maintaining social stability, accelerating economic development,” and “finally causing China to undergo an irreversible, fundamental change.” From a certain perspective, these remarks are true, only the change that has taken place has been the exact opposite of what is described.

The “economic development” that occurred during Jiang’s era, which was realized at all costs, was a lopsided one that sacrificed social justice and the environment, and exhausted the resources that Chinese people would have had to rely on for future survival and development. The development has caused the environment to rapidly deteriorate, rendering it impossible for the Chinese economy to sustain long-term growth. China’s future generations are faced with an increasing threat to their survival.

The “stability” under Jiang’s rule was a precarious one that was created by the authorities taking extreme measures in order maintain power and protect their interests. It was a “stability” made via a pressure cooker, one that was achieved by silencing people’s voices. Its consequences, when things come to a head, will be devastating.

What is even more dreadful is that out of his selfish desire to maintain his own authority, Jiang ruled the country with corruption, and turned the political, economic, and cultural elites into a huge interest group. The power system has been so degenerate as to become a tool for these elites to plunder the national resources. Maintaining the interests of this group has become the best way for these people as individuals to get ahead. Also, the Party does not have the checks of an independent media or other checks from outside, so the impetus for the Party to improve is completely nil. Corruption and underhanded politics have been rampant, and the morality of society as a whole is on a rapid downslide. From ordinary citizens to members of the government, people have keenly sensed the rampancy of the corruption and have felt that the terrible situation is irreversible. Deterioration of this degree will eventually lead many of the current achievements to fail; they are like a mirage or a house built on sand. Not everyone is aware of the gravity of the situation, however.

This chapter will discuss the crises and disasters that Jiang Zemin brought upon Chinese society during his rule, touching upon the environment, the economy, the political arena, sociology, education, and morality.

Jiang’s economic development strategy was, in essence, focused on GDP (Gross Domestic Product) only. Jiang flaunted his own “achievements” merely by talking about the GDP’s rapid rise, and simultaneously used GDP growth as the guideline to assess local officials’ achievements.

Natural resources are limited, however, and the capacity of the environment to absorb disposed waste is also limited. If the current over-development results in the destruction of the environment and the destruction of non-renewable resources that China would have relied on in the future, then the development is doing a disservice to the entire nation. In this sense, the lopsided economic growth of the Jiang era, which over-emphasized GDP, truly has “changed China”—China’s environment has undergone nearly irreversible and fundamental destruction.

According to a story from Xinhua News Agency on March 3, 2004, head of the Sustainable Development Strategy Research Group of the Chinese Academy of Sciences, Niu Wenyuan, said that a considerable part in China’s GDP growth figures had been achieved at the cost of later generations. In 2003 China produced less than 4 percent of the world’s total economic output, but consumed about one third of the world’s energy and material, including raw coal, steel, and cement.

When we put the above numbers side by side with Jiang Zemin’s 7–8 percent annual GDP growth rate (which discounted the costs), the Jiang era’s supposedly rapid development was actually large negative growth. From a long-term perspective, what Jiang did was no achievement; rather, it was a crime. No Chinese media of course ever dared to report on this issue. The situation is reminiscent of the fable, the Emperor’s New Clothes. This is another example of how the Party and Jiang have depended on each other for survival.

Land on the Verge, 150 Million People to Become Ecological Refugees

The Chinese people, since their childhood, have learned that China has vast territory and abundant resources, but in terms of per capita volume, China certainly is not a country with abundant resources. The average natural resource per person is half of the world’s average. But under Jiang’s governance, the ratio worsened.

Though big in size, China has large areas of tundra and barren plateaus, and the Gobi and other deserts. In 1980 the arable land was only an average of 0.32 acres per person. Because of the desertification and soil erosion caused by environmental degradation, by 2003 when Jiang Zemin stepped down, the average arable land per person was only 0.23 acres. In the first several years after the new century began, only as a result of the rapid urban sprawl, the nation lost approximately 16 million acres of arable land. According to the Ministry of Forestry’s data, in 1997 the total acreage of desert or desertified land was 1.689 million square kilometers, accounting for 17.6 percent of the country’s total land area. The figure grew to 1.74 million square kilometers in 2004, accounting for 18.1 percent of the country’s total land area. China’s soil erosion is the most serious of any country in the world, with eroded areas accounting for 38 percent of the country’s territory. Over 90 percent of the natural grassland in China has degenerated, and the annual increase of the degenerated grassland is 2 million hectares. In 471 counties of 18 provinces and regions, the arable land and the homelands of nearly 400 million people are being threatened by desertification.

Pan Yue, Deputy Director of the SEPA, once pointed out at the 2005 Fortune Forum that, at the current rate, in 15 years, China will have only six out of the current 45 major mineral resources. In five years, over 70 percent of China’s petroleum will have to be imported. Currently 40 percent of the main river system has become low quality water unfit even for irrigation or landscaping; more than 300 million people living in rural areas have no safe water to drink; more than 400 million city dwellers breathe dangerously polluted air, and 15 million people therefore suffer from bronchial diseases and respiratory tract cancer.

In addition, in 2003 the total emission volume of sulphur dioxide, the country’s main air pollutant, surpassed the capacity of the atmospheric environment by 80 percent. Regions in which there was acid rain accounted for approximately 30 percent of the national acreage; the detoxification processing of urban garbage fell short by 20 percent; only 21.5 percent of industrial hazardous waste is properly handled; nearly one third (33.2 percent) of all hazardous waste is stored improperly. When hazardous waste accumulates it becomes a significant source of pollution of the air, soil, surface water, and ground water. Five of the 10 most polluted cities in the world are in China.

It is important to note that, with Jiang’s GDP-centered development strategy, he only wished to take credit for the 8 percent annual GDP growth rate, but did not in the least take responsibility for the losses caused by acid rain to the ecosystem, human health, infrastructure, and cultural artifacts. When doing his calculations he of course conveniently overlooked the high medical expenses that both urban and rural dwellers bore because they incurred sickness from air and water pollution.

Statistics have indicated that, because arable land is being rapidly developed for urban uses, at present the total number of farmers in China who have lost their farm land is about 40 million, and it increases by more than 2 million per year. In February 2005, Pan Yue, in an interview with the media, cited experts as saying that, because the vast western area and ecologically vulnerable areas have difficulty sustaining the existing population, 22 provinces and cities need to transfer out 186 million people, but provinces and cities that could accommodate extra people, such as Guangdong, Beijing, Tianjin, Shanghai, Liaoning, Zhejiang, Fujian, Heilongjiang, and Hainan, could at most take in 30 million people. That means that 150 million people would become ecological refugees.

The Environmental Sustainability Index (ESI), put out by the World Economic Forum of Davos, Switzerland, indicated that, among 144 countries and regions in the world, China was ranked 123, or 14th from the bottom.

Some have said that the 21st century is “the century of the rise of China.” But the question is, can the ecological resources that remain, after having gone through plundering and destruction under Jiang, sustain the huge Chinese nation?