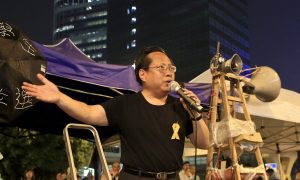 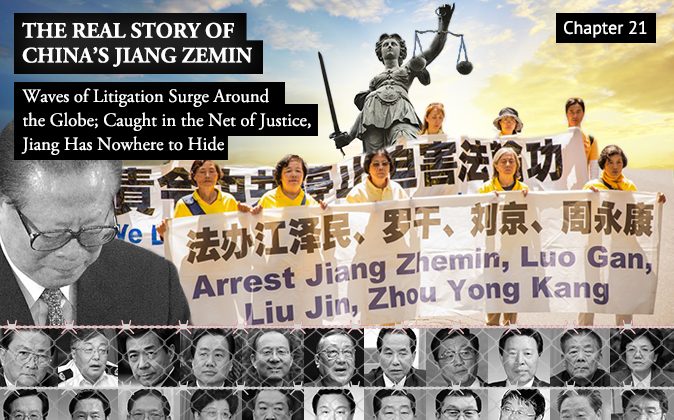 Anything for Power: The Real Story of China’s Jiang Zemin – Chapter 21

Waves of Litigation Surge Around the Globe; Caught in the Net of Justice, Jiang Has Nowhere to Hide
By Epoch Times Staff
biggersmaller
Print

Chapter 21: Waves of Litigation Surge Around the Globe; Caught in the Net of Justice, Jiang Has Nowhere to Hide

After Jiang Zemin was sued in Chicago he quickly grew preoccupied with the question of how to handle Falun Gong’s litigation efforts.

It was said that Jiang ordered, “Everything must be done to prevent Falun Gong from winning the lawsuits.” Falun Gong thus became the first priority, both militarily and economically. Jiang was willing to make enormous economic sacrifices in exchange for intervention—or help, that is—by the U.S. government in the litigation he was subject to. To this end Jiang quietly dispatched a team consisting of 27 members to the Chinese embassy in Washington, D.C. The team’s mission was to identify the hobbies and interests of congressmen and senators so that Jiang could, acting on these insights, win their support and get them to lobby on his behalf.

However, overall things didn’t go as Jiang had hoped. As of June 2005, 35 attorneys from 29 countries had come together to work as a team to bring Jiang to justice; to date the group has filed 16 lawsuits against Jiang in 15 different countries. Counting cases against Jiang and an additional 22 suits against CCP officials, a total of 47 lawsuits have been filed in connection with the suppression of Falun Gong. This amounts to the largest international human rights legal effort since the aftermath of World War II.

In light of this—both the extent to which they have affected and disturbed Jiang and their international, historic stature—the lawsuits warrant a close look.

1. The First Lawsuit Against Jiang

In August 2000, Chu O-ming from Hong Kong and Wang Jie from Beijing mailed a petition letter to the Supreme People’s Procuratorate in Beijing, accusing Jiang, Lou Gan, and Zeng Qinghong of banning and suppressing Falun Gong illegally. This became the first lawsuit against Jiang. After the Procuratorate received the letter, the defendants Jiang and Luo Gan personally issued an order to arrest the plaintiffs. Two weeks after the letter was mailed, the two plaintiffs were arrested in Beijing. Among them Wang Jie was persecuted to death in 2001, and Chu O-ming was sentenced to five years imprisonment secretly and has since been in jail in Chadian Prison in Tianjin City ever since.

Since Jiang’s clique began persecuting Falun Gong comprehensively in 1999, Chu O-ming and Wang Jie had bought books on law, searching for relevant legal provisions inside them, and later drafted briefs detailing the illegality of the persecution in light of the facts and their research. They finished writing the petition letter to the Supreme People’s Procuratorate in July 2000. The petition letter accused Jiang (then President, Chinese Communist Party General Secretary, and Central Military Commission Chairman), Luo Gan (then State Councilor and Secretary of the Political and Judiciary Committee) and Zeng Qinghong (then Politburo member, chief of the secretariat of the CPC Central Committee, and Minister of Organization) of persecuting Falun Gong, claiming that they “seriously tarnished the state’s reputation, social morality, and undermined the state’s institutions, constitution and law.” [1] On Aug. 25, Chu O-ming and Wang Jie mailed the letter from a post office located on Changan Street in Beijing.

After Jiang and Luo Gan learned of this, they were flustered and exasperated, and immediately ordered a mass hunt as if this was a major incident. Soon after, it was found that Chu O-ming once acted as the manager of the international trade department in Yanshan Petrochemical Company in Beijing. Following that clue, at about 11 p.m. on Sept. 7, two weeks after the letter was mailed, more than 20 undercover policemen from Haidian District and Fangshan District surrounded the apartment where Chu O-ming and Wang Jie were temporarily staying, and both Wang and Zhu were arrested.

After Chu O-ming and Wang Jie were arrested on Sept. 7, there was no further news about them. After Falun Gong followers and friends who cared for them inquired about their situation through various channels, they learned that the two were “arrested on Jiang and Luo’s direct orders,” and “nobody is allowed to investigate this matter or intercede for them.”

After Chu O-ming and Wang Jie were arrested, Jiang and Luo Gan had nothing to interrogate them about, but were determined only to vent their personal spite. Therefore, the police officers didn’t bother to interrogate them, but instead beat and tortured them. However, both of them were resolute and steadfast, and would rather die than surrender. Since Wang Jie was a Chinese citizen (Zhu was not) he was subject to even more horrible torture methods.

On Nov. 30, 2000, the Beijing Hospital of Chinese and Western Medicine wrote on Wang Jie’s “Diagnosis and Treatment Record” (medical record no. 53791) “[Wang] was treated in the hospital from Nov. 24–30, a total of seven days. The discharge diagnosis was chronic renal insufficiency, glomerulonephritis.” At that time Wang Jie’s weight had gone down from 70 kilograms before his arrest to 50 kilograms after his arrest.

On Nov. 30, 2000, Wang Jie’s relatives were notified by authorities to come post bail for Wang and await trial. According to insiders, at the time Wang Jie was completely disoriented. He had lost control of his bowels and bladder, and needed dialysis every other day. Reporters saw another statement, which read Wang Jie was treated in Beijing Friendship Hospital, affiliated with Capital University of Medical Sciences, from Nov. 30 to Dec. 16 (a total of 16 days), with a total charge of 9806.98 yuan (US$1,200) mostly from the cost of dialysis.

When Wang Jie was hospitalized in Beijing Friendship Hospital, the police officers kept watch on him in the hospital every day. His health never improved, and he didn’t speak a word during that time. Afterwards the police officers allowed his family to bring him back home to be treated by Traditional Chinese medicine with the precondition that he was to be “awaiting trial.” Their intention was to allow him to recover so that they could arrest him again and continually persecute him.

After Wang Jie was brought back home, his symptoms were resolving. However, he still couldn’t move his body, not to mention walk. When his family members asked what kind of suffering he underwent while in police custody, he didn’t answer, but his eyes were filled with tears.

In late April 2001, Wang Jie was brought overseas with the help of some very kind people. On May 2, some Falun Gong practitioners discovered that Wang Jie displayed symptoms of losing memory, breathing difficulties, and extreme muscle weakness. Someone brought articles from the Minghui website which described very difficult situations (including the terrible police pouring boiling water, burning with cigars, freezing, and beating) that Falun Gong adherents suffered, and legendary cultivation stories about Buddha Milarepa’s difficult life journey all to encourage Wang Jie. One day, Wang suddenly started to talk, saying, “I have experienced all these tortures.” Wang once asked an adherent beside him, “Have you ever heard of Zhazi Cave? I suffered the tortures similar to that experienced in Zhazi Cave.” The friend asked, “When they were beating you, were you afraid?” Wang Jie, who was reserved by nature, suddenly opened his eyes widely and said, “That’d be unthinkable!”

Wang Jie’s skin around his ankles had been worn through to the bone from having been shackled for so long. The wounds didn’t heal for a long time afterwards. Wang said that one of the means of torture police often used was to wrap a person up with a layer of something before beating him violently. That way the wounds would not be visible.

A friend once asked Wang, “What was your most painful moment?” Wang replied, “The moment when the police officers kneed me in the kidneys.” After Wang was abducted to Fangshan District Detention Center, he was beaten by police every day. The police officers received instructions from Jiang and Luo Gan, and had no intention of interrogating him, but constantly beat him mercilessly. After the vicious police officers kneed him in the kidneys fiercely, Wang fell into a coma for one month and only regained consciousness after being rescued.

In his final days, Wang developed night sweats and hematemesis. Sometimes after eating one or two mouthfuls of food, he would violently vomit blood, and the blood was thick and mealy-looking. When recalling this experience, an insider said that this was a symptom often associated with damage to the central nervous system. Wang Jie at the time was extremely weak. To maintain breathing during sleep at night, he needed to slowly remove his underpants to relieve the pressure of the elastic band against his waist. But he endured the pain silently and firmly. In the midnight of June 18, 2001, Wang Jie fell to the ground in the restroom and never rose again. He was 38 years old at the time.

In April 2001, Zhu’s family members were notified again and they learned that Zhu was secretly sentenced to five years imprisonment and transferred to Chadian Prison in Tianjin City. The police officers kept a close watch on him. Zhu was called “the last one in the prison” since he not only refused to be brainwashed and transformed, but also wrote appeal letters every month.

The police officers told him that as long as he wrote one of the “four statements” (guarantee statement, repentance statement, separation statement, exposure and criticizing statement), he would be released. But Zhu stuck with his belief and never compromised. Also, the prison authorities never sent the appeal letters written by Zhu to their designated offices.

Starting in August 2001, Falun Gong practitioners in Hong Kong and America made many efforts to call for the release of Chu O-ming, who is a Hong Kong resident. Overseas media such as the Associated Press, BBC, Agence France Presse, Apple Daily and so on, have reported on this story.