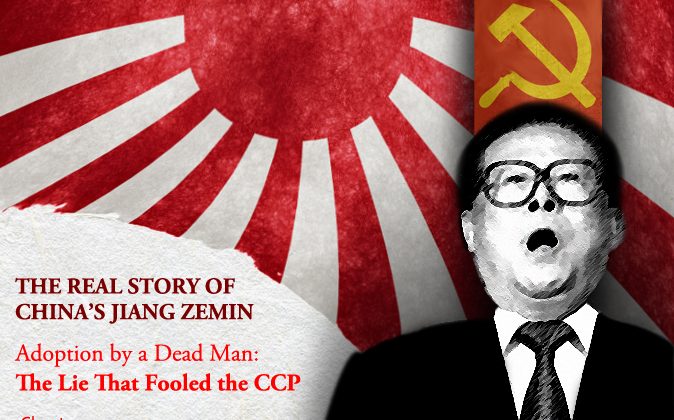 Adoption by a Dead Man: The Lie That Fooled the CCP
By Epoch Times Staff

Chapter 1: Adoption by a Dead Man: The Lie That Fooled the CCP

When Jiang Zemin was mayor of Shanghai, the word on the street was that Jiang was the incarnation of a toad. That people there would so readily identify with this idea is most surprising, given that not only is Shanghai a hi-tech, well-developed city under the direct jurisdiction of the central government, but moreover the place where Jiang climbed the political ladder. The association later followed Jiang to Beijing, to which he moved in 1989. Beijing residents took to calling him “Big Toad Jiang.” Jiang does bear resemblance to a toad, after all. And the association is fairly understandable in light of China’s cultural context, as similarly blurred boundaries between animal and human reach far back in Chinese history; many will recall the fox soul that reincarnated as a beautiful concubine and wreaked havoc in the imperial court. [1] That a toad’s incarnation could become the mayor of Shanghai was not, in a sense, an entirely new concept.

The toad that had inhaled the wicked, age-old qi was a creature that had depended on water for its survival. After its death the toad reincarnated in a wealthy family by the name of Jiang, which lived on Tianjia Lane in Yangzhou City of Jiangsu Province, and was given the name “Zemin,” meaning literally, “he who survives on water.”

In 1915 Jiang Shixi, then 45 and a doctor of Chinese medicine, ventured into business and became an assistant manager at the Yangzhou office of Dadaneihe Shipping Company. After coming to enjoy prosperity he moved to Tianjia Lane in the city’s Qiongguan District—a suburban residential area for the wealthy.

Jiang Shixi had seven children, two of whom died young. The sixth child, Jiang Shihou (also named Jiang Shangqing) joined the Communist Party in 1928 and was killed in war in 1939 at the age of 28. He was survived by his wife, who was of the same age, and his two daughters, Jiang Zeling and Jiang Zehui. The fifth child, Jiang Shixiong, died from a stroke at the end of the 1960s during the Cultural Revolution. The seventh child, Jiang Shufeng, a college teacher in Yangzhou, died in Beijing in November 1993. The eldest child, Jiang Shijun, turned traitor and sold out his country during the War of Resistance Against Japan (1937–1945), disgracing the Jiang family name.

A traitor and collaborationist is invariably despised by the public, regardless of who holds power. Jiang Zemin, the son of Jiang Shijun, thus did everything possible to avoid mention of his father. After becoming General Secretary of the Chinese Communist Party (CCP), Jiang Zemin promoted his lovers and confidants, gaining them important posts, all the while turning a blind eye to their corrupt ways. Yet he would not so much as lift a finger for his biological brothers and sisters and avoided all contact with them, even to the extent of not acknowledging them.

This incredible fact became known only after the passing of Deng Xiaoping. After gaining power, Jiang quickly assembled a team of writers to compose his biography. Though the group labored in search of any accomplishments by Jiang, few were found. And instead much was unearthed that was unknown and suspicious about Jiang, including his attempt to hide his real background. Furious at the group, Jiang ordered it immediately dismantled. But Jiang couldn’t seal each of the writer’s lips, and with time word of his shameful past indeed began to spread.

In November 1940, Jiang Zemin’s father, Jiang Shijun, joined the government of Wang Jingwei in Nanjing—a traitorous puppet regime of the Japanese. With his name changed to Jiang Guanqian, Shijun was appointed as a vice-minister in the Ministry of Propaganda of the Wang government and made a head member of the institution’s editorial committee. He also worked under Hu Lancheng, the main staff writer of the China Daily and former husband of Zhang Ailing. Along with Zhou Zuoren, Hu was one of the most notorious traitor-writers in China. Hu later authored History’s Turmoil after leaving China for Japan, a work in which he specifically mentions collaboration with Jiang Shijun.

So that his eldest son might one day outshine others, Jiang Shijun sent Jiang Zemin to an expensive high school—Yangzhou High School—and then later to Central University, which was run by Wang Jingwei’s puppet government; from a young age Jiang Zemin was enrolled in piano lessons. That wealth would accrue in the Jiang family at that time, and through the dealings of a traitor, no less, was most extraordinary, for those were the years when ordinary Chinese found it hard just to make ends meet. Jiang Zemin would live up to his father’s expectations, learning to sing, dance, play musical instruments, and even know something of Peking and Zhejiang opera.

After coming to power Jiang Zemin returned to his hometown in Yangzhou to pay respect to his ancestors, spending, all told, some 1.5 million yuan (approximately US$200,000) of state money to renovate his family’s ancestral tomb. Journalists uncovered something peculiar, however: Jiang kept talking about his grandfather, Jiang Shixi, while gingerly avoiding any mention of his father, the traitor Jiang Shijun, though the latter had taken great pains to support him.

The Communist Party has always accorded importance to a person’s family background and never hesitated to peg a person’s “class category.” So it was that Jiang Zemin, aspiring to climb the Communist Party ladder, from day one would write the name of Jiang Shangqing—the uncle who was only 15 years his senior—when filling out forms asking the name of his father. For one thing, Jiang Shangqing had participated in the revolution, while furthermore, as a deceased man and a martyr, hardly could he make political mistakes. His name was, as Jiang saw it, the safest bet. Jiang Zemin thus audaciously transformed himself from the offspring of a traitor into the “son of a revolutionary martyr.” Ever since, Jiang sought to constantly deepen ties with his widowed aunt, Wang Zhelan, by way of frequent visits and gifts.

Jiang Zemin was not in fact admitted to the famed Yangzhou Middle School after completing elementary school. Rather, he was admitted merely to a county-level junior high school in Jiangdu—a matter which, in fact, left Jiang feeling depressed. It was in his second year of schooling that he transferred to Yangzhou Middle School, a move made possible by his well-connected father. It was similarly through the maneuvering of his father that Jiang later managed to study at Central University; the school was, as noted, run by the puppet Japanese regime to which Jiang’s father was connected. It was then that Jiang realized power and money get things done. Soon after, however, Jiang discovered much to his disappointment that China’s nationalist government did not recognize Wang Jingwei’s puppet regime and its university; this in effect nullified Jiang’s education there. This stemmed from the fact that China’s prestigious Nanjing Central University had actually been relocated by the nationalist government to its resistance base in southwestern China. The so-called “Central University” in Nanjing City that Jiang attended, despite what its name would suggest, was a school rigged together by Wang Jingwei’s puppet government, and not the real Nanjing University.

Not long after Jiang Zemin became General Secretary of the CCP in 1989, Nanjing University in Jiangsu Province found while sorting through files of past students that Jiang Zemin had studied at one of its predecessors—Central University—from 1943 to 1945. They came across Jiang’s academic transcript and library card. Delighted over their findings, the university’s alumni association was most eager to send Jiang a friendly letter of association. Jiang never replied, however, much to the university’s dismay. This suggests that Jiang not only guarded closely his family background, treating it as secret, but furthermore chose to keep silent about his education lest he be found out.

During his inspection tour of Jiangsu Province in the early 1990s, Jiang Zemin paid a special visit to Nanjing University. [2] The school took special care to place on Jiang’s itinerary the dormitory where he had stayed in his college years. Upon arriving at the building, Jiang stopped and stared at the dorm, apparently lost in thought. Silence filled the air as all present stood by, waiting. The university’s administrators didn’t dare to come forward and remind Jiang, “This is where you once stayed when you were a student here. We have maintained it well.” Jiang lacked his usual bravado that day, keeping uncharacteristically quiet.