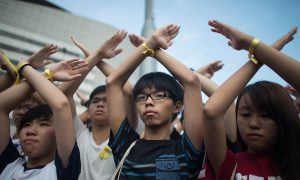 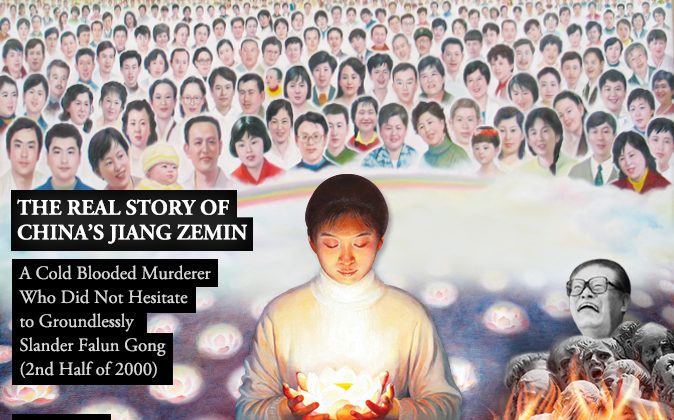 Anything for Power: The Real Story of China’s Jiang Zemin – Chapter 16

Chapter 16: A Cold Blooded Murderer Who Did Not Hesitate to Groundlessly Slander Falun Gong (2nd Half of 2000)

Jiang Zemin willingly placed everything on the line when he started the suppression of Falun Gong. He knew deep down that he was stepping onto a road with no return, a fact that only heightened his fear and madness.

1. “Destroy Their Reputations, Cut Them Off Financially, and Eradicate Them Physically”

At the beginning of the suppression, Jiang Zemin had a secret conversation with Luo Gan on the “Falun Gong problem.” He relayed four main points to Luo:

1. “Treat them ruthlessly, especially those who petition [the government] or distribute Falun Gong material. Once they are seized, beat them to death. Then cremate them without identifying the bodies.”

2. “Use any means that work regarding the issue [of Falun Gong], don’t feel constrained by anything, including the law. If they die no one will be held responsible. I refuse to believe that I cannot handle Falun Gong.”

3. “Destroy their reputations, cut them off financially, and eradicate them physically.”

4. “In general don’t issue any official documents, instead, only send encoded faxes without a signature or transmit the information verbally using the name ‘Party Central Memorandum’!”

At the end of 1999, following Jiang’s instructions, Luo Gan had four former members of the Falun Dafa Association sentenced to long prison terms. In 2000, Luo Gan traveled across China to transmit verbally Jiang’s secret orders. Luo Gan visited many places before he finally returned to Beijing.

In May 2000, the Committee for Investigation on Persecution of Religion in China (CIPRC) and the Free China Movement, based in America, published a confidential document of the CCP, which gave the police the authority to arrest Falun Gong practitioners of their own accord and without an arrest warrant. The document, transmitted by the Department of Public Security of Jilin Province and The High People’s Court, stated, “We should intensify the suppression of Falun Gong. Once Falun Gong practitioners are found, we can arrest them first, then go through the formalities later.”

However, Jiang Zemin repeatedly read in the CCP internal circulars on domestic news that more and more Falun Gong practitioners, even including ones from North America, Europe, Australia and East Asia, were going to Beijing to petition the government on behalf of Falun Gong. In October 2000 alone, upwards of 10,000 Falun Gong practitioners made it to Tiananmen Square, and displayed banners reading “Truthfulness, Compassion, Tolerance” or “Falun Dafa is Great.” Thousands of adherents continued even to do their exercises in groups. Although the police dealt with these matters swiftly through beating, arresting and detaining them, both Jiang Zemin and Luo Gan were shocked.

Jiang possessed the largest army, police force, spy network, and propaganda system in the world. However, it seems he was utterly helpless in the face of the unarmed Falun Gong followers. Out of embarrassment he grew fiercely angry. He realized that members of the Politburo, who disapproved of the suppression, were making fun of him.

Falling into an impasse in his campaign against Falun Gong, Jiang felt a faint, inexplicable fear. It was not a fear that arises from direct attack, but more a feeling of wandering in the dark carrying a sharp weapon, not knowing where his opponents were or in which direction to attack.

Since arriving in Beijing in 1989, Jiang listened to Zeng Qinghong’s advice on how to capitalize on people’s weaknesses amidst a number of power struggles. For example, to subdue Liu Huaqing, arresting his children and torturing them was definitely effective. The best way to make Qiao Shi leave office was by making a gentlemen’s agreement with him and not carrying it out. Bo Yibo hoped to help his son get ahead by stepping on others, so the most effective means was to use Bo Yibo to persecute others. Jiang knew he could take control of people by seizing on their weaknesses. As for Jiang’s subordinates, it was even easier to manipulate them. Since some of them loved money, some loved women, and some loved power, Jiang had every means to make them loyal to him.

But Jiang couldn’t manage to find what made Falun Gong followers tick. His understanding of the power of spiritual belief fell squarely within the old CCP way of thinking about class struggle. He could not understand how after dealing with these people with the harshest of disciplinary means, such as murder, torture, lies, brainwashing, and monitoring—means which were acquired by the CCP over prior decades—they still did not yield. He simply couldn’t figure out what they were after. But there was one thing that he did know, which was that those people were very honest and stood by the principle of “not returning blows and not returning insults.” Although the suppression of the group was escalating rapidly, and thousands upon thousands of Falun Gong practitioners were dealing with all sorts of threats, insults, torment, and imprisonment, no one attempted retaliation or resorted to any kind of violence. Jiang thought it was inconceivable. In fact, Jiang had hoped that they would resist violently. That way he could send in the army to squash the “rebellion” rapidly, just like what was done during the Tiananmen massacre in 1989.

Falun Gong adherents never hit back, and it appeared at times that they were being assisted by a higher power. In October 2000, a large group of Falun Gong practitioners went to Tiananmen Square to lodge complaints. More than 10 of them were from Nanyang City, Henan Province. They were handcuffed and taken to a detention center by local 6-10 Office police. However, after they entered the cell, all of their handcuffs spontaneously came off. If only one or two handcuffs had come off, one could have called it a coincidence. But with more than 10 handcuffs coming off simultaneously, it went beyond what ordinary reasoning could explain. When that happened, all the guards and inmates were dumfounded. Witnessing the miraculous event, no one dared to make any trouble for the practitioners. Afterwards someone reported the incident to higher authorities. After learning of the matter, Jiang Zemin was left in a cold sweat and dared not to think about it anymore.

Since the persecution campaign was so senseless, the personnel in the 6-10 Offices found it hard to do their jobs. A former 6-10 police officer who escaped to Australia in 2005 described how he felt when he was performing that job: “At the office we often talked to each other with our mouths half-covered, voices as low as possible, and eyes darting all around. Having been in that atmosphere for a long time, we grew accustomed to speaking in this fashion even in public situations, as if we were afraid of being heard or afraid that others might know what we were talking about. We were so sneaky it was as if we had developed a mental disorder.” [1] “When we returned home, we lost our usual smiles, and replaced them with taciturn and deep sighs. Even within the police system, ‘6-10’ became synonymous with ‘messing around.’ The police officers said to each other privately: ‘The police officers in the 6-10 Offices are a mess. They never do what they are supposed to do as police.” [2]

Jiang responded to the problems by simply intensifying his efforts to win the officers over with money and power. He established more and more 6-10 Offices, elevated the 6-10 officers’ rank and status, and guaranteed them sufficient funds. For example, in October 2000, Division One of the Tianjin Municipal Public Security Bureau was promoted to “Domestic Safety Defense Bureau,” a deputy bureau level agency. It was the result of a merger between the Political Defense Division and the 6-10 Office, thereby effectively expanding the 6-10 Office to intensify its suppression of Falun Gong. The 6-10 offices, which are units at the division level, have more power than units at any other level of the police system. The power of 6-10 offices within the provincial police departments is so great that they can arrange inspection of and issue orders to other units at the same level. But what is laughable is that very few police officers responded to recruitment efforts on the part of the 6-10. Finally, the personnel were appointed through random assignment by a computer.

The CCP’s system of suppression operates like a well-oiled machine. The 6-10 officials, who are tools in the persecution, are actually the first victims of the persecution. Members of the 6-10 Offices, both new and old, have to make a study of Jiang’s reasons for the suppression and have to read massive amounts of propaganda vilifying Falun Gong, daily. Consequently, they are unwittingly brainwashed.

When the last shred of innate kindness was destroyed in the law enforcement officials, their wicked side engorged quickly. This was when Jiang’s orders could be fully implemented. And after they carry out the orders they are rewarded with money and promotion, similar to how animals obey their trainers in hopes of reward.

Jiang stipulated that the amount of reward the officers in the 6-10 offices and guards in the forced labor camps would receive (such as bonuses, promotions, and merit points) should be closely related to the number of Falun Gong practitioners they successfully force to renounce their beliefs. As a result, under Jiang’s orders layers upon layers of political pressure has been exerted by all levels of government officials, and personal incentives have been offered, causing the police and guards simply to lose their consciences. When the “People’s Police,” who wear the national emblem on their heads, do whatever they please and treat human life as worthless, they console themselves by saying, “the orders came from higher authorities.” Sadly, the police officers who performed such evil deeds at the beginning of the suppression were actually the first victims.

Through this system the entire country has become mired in a disaster like never before, where “men turned into beasts, beasts flaunted their wickedness, and the sinister acts hurt men.” The basic values of conscience, ethics, justice, equality, and so on, which had begun making a (slight) comeback after the Cultural Revolution, have been thoroughly destroyed once again in the suppression of Falun Gong. Falun Gong practitioners’ persistent commitment to their teachings about “truthfulness, compassion, tolerance,” has in a sense preserved the last bit of values that the Chinese people have left.

Among the violent means that Jiang used in the persecution, the large-scale ending of lives is the most unnerving. According to the Falun Dafa Information Center, as of June 2005, the confirmed number of persecution-related deaths of Falun Gong practitioners in China exceeded 2,500. And even more unknown deaths have occurred, in the forced labor camps, brainwashing classes, detention centers, etc.