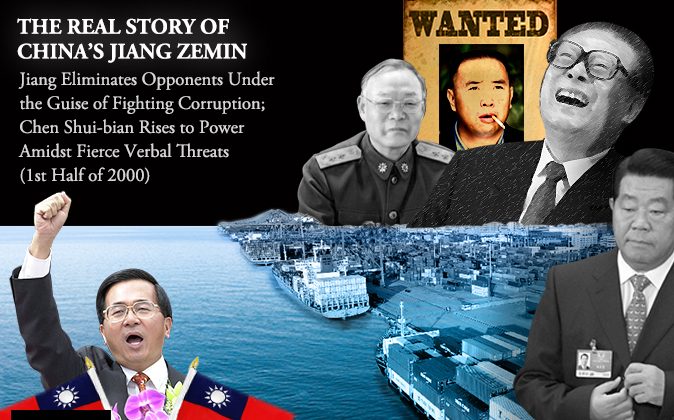 Anything for Power: The Real Story of China’s Jiang Zemin – Chapter 15

Jiang Eliminates Opponents Under the Guise of Fighting Corruption; Chen Shui-bian Rises to Power Amidst Fierce Verbal Threats (1st Half of 2000)
By Epoch Times Staff

Chapter 15: Jiang Eliminates Opponents Under the Guise of Fighting Corruption; Chen Shui-bian Rises to Power Amidst Fierce Verbal Threats (1st Half of 2000)

He actually found it desirable to rule China with corrupt officials. Winning the allegiance of others always banks on something. Some rely on their wisdom and prestige, others count on popular election. As such Jiang, lacking wisdom and not having been elected, knew that were he to appoint honest and upright officials his incompetence and corrupt ways would be noticed. How Jiang treated Zhu Rongji, who was widely known as an official of integrity and meritorious service, was a telling sign of what kind of officials Jiang was looking for. Corrupt officials, by contrast, were advantageous for Jiang in that they wouldn’t pose a threat—they were disdained by the public.

Ironic it is that corrupt officials have been among the most vocal in China’s fight against corruption. All of the senior officials who fell from power—on charges of graft—in internal political struggles were those who had given strong support to “anti-corruption initiatives.” Jiang, himself the head of arguably China’s most corrupt family, used slogans related to “fighting-corruption” as a means to win popular support and attack political opponents. In Robert Kuhn’s biography of Jiang remarks about fighting corruption abound, though. But actions count louder than words. All of the corrupt officials loyal to Jiang met with swift promotion while those who held different political views were punished cruelly, usually under the guise of “fighting graft.” Others who were useless to Jiang similarly met with punishment, as a warning to others.

In 2000, in the public’s eye, Jiang seized upon the opportunity provided by what has become known as the “Yuanhua Case” to eliminate political opponents and protect those loyal to him. The telling episode deserves discussion.

The “Yuanhua case” has a long story behind it. The main culprit of the case is the board chairman of the Yuanhua Group, Lai Changxing. Lai founded the group in 1994 and was thereafter engaged in the practice of smuggling. According to official sources, from 1996 up through the time the case came to light, the Yuanhua group was engaged in some five years of illicit smuggling. The value of goods smuggled by the group totaled 53 billion yuan (US$6.4 billion), with duty fees evaded amounting to 30 billion yuan (US$3.6 billion); this resulted in a loss of 83 billion yuan (US$10 billion) in revenue for the state. At the time the Yuanhua case was regarded as the largest incident of smuggling to have taken place since the CCP came to power in 1949.

Although the Yuanhua smuggling case was widely reported in Hong Kong and Macao, media in China didn’t report on the affair whatsoever, save for marginal mention in one November 1999 Beijing Evening News report. The case began to gain attention in 2000 after being reported on widely by international media such as The Wall Street Journal, The New York Times, The Washington Post, and The L.A. Times.

According to coverage of the case, the matter came to light via an anonymous tip-off that then-premier Zhu Rongji received in March 1999. The source exposed the details of the massive smuggling that the Yuanhua group was carrying out in Xiamen City. The source provided detailed eyewitness testimony and physical evidence. It was in this fashion that the major smuggling case and the astronomical figures it involved came to light.

Regarding this case, Zhu Rongji said, “No matter who is involved, it should be thoroughly investigated regardless of his status.” Jiang chimed in along similar lines, saying that those involved should be punished heavily irrespective of their status. Jiang’s position on the case changed quickly, however, when the investigating task force discovered that the matter was closely connected to Jiang’s subordinates, among whom were Jia Ting’an and Jia Qinglin.

In early 2000, the Hong Kong Economics Times quoted an informed source in Beijing as saying that the 420 Investigation Task Force—the group appointed by the Central Committee of the CCP to investigate the Yuanhua case—was required to complete its investigation before the Two Conferences (the National People’s Congress and the Chinese People’s Political Consultative Conference) were convened. The stipulation was in place so that authorities could publicize at the two conferences their “significant accomplishments” of fighting graft in what they called “a century-spanning campaign against graft.” The proviso showed that what was really central for Jiang was seizing the occasion of the Yuanhua problem to boost his own standing. At the same time, though, Jiang wished for swift closure to the investigation in that he feared being implicated.

Executing Accomplices Before the Case Was Closed

Multiple departments conducted a joint investigation into the Yuanhua matter in 2000, with involved bodies including the disciplinary inspection committee, supervision department, customs authorities, public security department, prosecutor’s office, court, and finance and taxation units. The smuggling in Xiamen City and the involved dereliction of duties were investigated thoroughly. During the investigations over 600 persons were probed, with nearly 300 being prosecuted in the end for criminal liability.

In 2001 courts at several levels issued a total of 167 verdicts on 269 defendants in connection with the Yuanhua smuggling case. In July, before the case was closed, several persons had already been sentenced to death and executed. Victims included Ye Jichen, the former president of the Xiamen branch of the Industrial and Commercial Bank of China; Wu Yubo, the former section chief of Ship Management section of the East Ferry Management Office of Xiamen Customs; along with Wang Jinting, Jie Peikong, Huang Shanying, Zhuang Mingtian, Li Baomin, and Li Shizhuan, among others.

In such a high-profile case, the execution of 10-plus accomplices before the conclusion of the investigation was tantamount to destroying evidence, making it impossible to ever truly solve the case. This owed fully to the case’s bearing on the close subordinates of Jiang Zemin, who acted as quickly as possible to wipe out sources of incriminating evidence. The acts of killing, disturbing as they were, were in fact then turned around by Jiang and made out to be signs of the Party chief’s strong “determination” and a mark of achievement. Media widely reported the matter in a positive, affirming light.

During the investigation Jia Ting’an, who was one of Jiang’s most trusted confidants and the director of Jiang’s office, on one occasion divulged classified information to Lai Changxing. Lai also revealed that he was on very good terms with three of Jiang’s five secretaries, of whom one was Jia Ting’an, the chief secretary.

Many people aren’t familiar with who Jia Ting’an is. Jia was the director of Jiang’s office when Jiang became General Secretary of the CCP. He had before then been Jiang’s secretary when Jiang worked in the Ministry of the Electronics Industry. Jia returned to Shanghai with Jiang in January 1985, later coming back to Beijing with Jiang in June 1989. As Jia was Jiang’s most important secretary and assistant, people called him the “Master Secretary.”

In 2004 Jiang promoted Jia from the director of Jiang’s office to the director of the office of Central Military Commission (CMC). Jiang also recommended that Jia’s military rank be raised directly from that of a colonel to lieutenant general; Jiang’s invoked the pretexts of this being a “special circumstance” and of “benefit to our work.” Members of the CMC said that Jia’s administrative rank was merely that of a bureau director, of which the corresponding military rank is colonel, and that promoting Jia as Jiang had sought to do could result in a revolt in the Commission. Jiang nonetheless insisted on pushing ahead with the move. When Jiang made the recommendation a second time the motion was again tabled in a CMC meeting. The facts suggested that Jia was clearly Jiang’s most trusted subordinate.

Lai Changxing stated on one occasion that, “Jiang’s mansion was inside the Zhongnanhai compound. Jiang lived on one side while his security guards and secretaries occupied the other. Jiang mostly lived in Zhongnanhai, but when the mansion was under renovation in 1997 and 1998 he lived in Diaoyutai.”

When speaking with Sheng Xue, the author of The Dark Secrets behind the Yuanhua Case, Lai said that although he did not have direct contact with Jiang, he had once intended to make a donation to the CMC. Jiang’s secretary reported the matter to Jiang. Lai added, “Jiang said that I didn’t have to do so. He would like me to keep the money for business use. Jiang also expressed to me his appreciation. He knew that I was his secretary’s close friend.”

On one occasion when Jia went to the airport to pick up Jiang after Jiang returned from an overseas trip, Jia told Jiang that Li Jizhou (the former deputy minister of public security) was involved in an automobile smuggling case in Guangdong Province. Then Jia asked another of Jiang’s secretaries to ask Lai whether he was involved in the affair.

Afterwards Lai promptly told Li Jizhou about the matter while in Zhuhai City; at that time Li Jizhou was accompanying Zhu Rongji to inspect efforts meant to combat smuggling in Guangdong Province. Along with this Lai made plans to help Li’s girlfriend, Li Shana—a former official at the Ministry of Public Security’s Transportation Department—hide and avoid capture for her involvement, though she was later arrested.

Given that Lai’s relationship with Jia was that close, could one really expect Jiang to bring Lai to justice? As lofty as Jiang may have pitched his anti-corruption rhetoric, his crime fighting campaign was merely a veneer by means of which he could attack his political opponents.