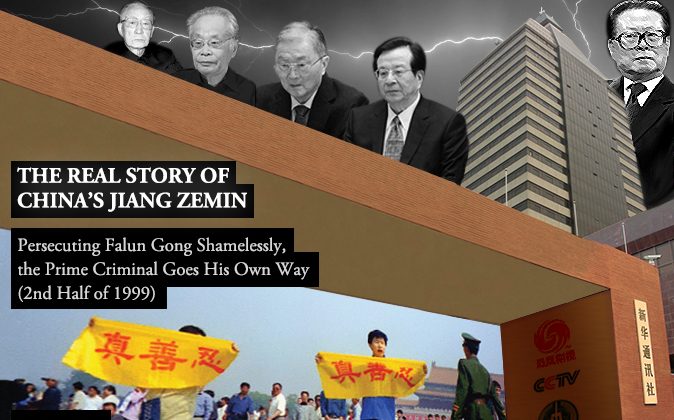 Anything for Power: The Real Story of China’s Jiang Zemin – Chapter 13

Persecuting Falun Gong Shamelessly, the Prime Criminal Goes His Own Way (2nd Half of 1999)
By Epoch Times Staff

Chapter 13: Persecuting Falun Gong Shamelessly, the Prime Criminal Goes His Own Way (2nd Half of 1999)

A number of major events transpired during the 15 years of Jiang Zemin’s rule (including the past two years, post-retirement, in which he controlled state affairs from behind the scenes), among which are counted the return of Hong Kong and Macau to China, China’s entry into the World Trade Organization (WTO), and the suppression of Falun Gong. Of the events, only the suppression of Falun Gong was spurred forward by Jiang, while the others happened either due to luck or as a result of other people’s hard work.

When Jiang banned Falun Gong it was the beginning of his political downfall. One might say that after Jiang became one of Beijing’s power elite on the heels of the Tiananmen Massacre, he methodically consolidated his power through a series of brutal political struggles. But the suppression of Falun Gong quickly became an albatross for Jiang. Jiang didn’t expect this in the least, anticipating instead that Falun Gong could be swiftly crushed. Jiang’s political fate was tied to the campaign against Falun Gong from the moment he went his own way in launching it. All of his decisions came to revolve around the issue.

Hard is it for those who reside in a mundane world to grasp the power of higher spiritual beliefs. Consider that power as manifest in the early Christians, who never took up arms and outlasted 300 years of persecution by the once-powerful Roman Empire. Jiang will, unto death, never admit that he made a mistake in persecuting the followers of Falun Gong; yet their peaceful and composed fight over the past several years has left him with no way out. To understand Jiang’s thinking and behavior post 1999 (the year he began the ban on Falun Gong), it is necessary to first understand the persecution in a comprehensive way.

After the April 25, 1999, gathering at Zhongnanhai, there was constant activity by Chinese authorities involving Falun Gong, such as nationwide investigations on the part of the government, preparations for the propaganda to be leveled against the group, mobilization of the Public Security system to seek out and collect information on Falun Gong, and “ideological preparation” of the people at the various local Party organizations. Jiang treated the Falun Gong issue as top priority.

Li Hongzhi, the founder of Falun Gong, had moved to the United States some years before, but Jiang went so far as to try to extradite Li back to China through a reduction of $500 million in trade surplus with the U.S. In an article called “Some Thoughts of Mine,” published on June 2, 1999, Li said:

I only teach people to be good. At the same time, I unconditionally help people get rid of their diseases and health problems, and I enable them to reach higher realms of mind. I don’t charge any money or ask for material things as reward. All of this has had a positive impact on society and its people, and it has, on a large scale, turned people’s hearts towards goodness and made their moral level high. I wonder if that is why they seek to extradite me. […] however, normally people who are extradited are war criminals, public enemies, or criminal offenders. If so, I wonder which of the above categories I would fit into. [1]

In fact, I keep teaching people to conduct themselves with Truthfulness, Benevolence, and Forbearance as their guiding principles. So naturally, I have also been setting an example. When Falun Gong disciples and I have been criticized for no reason and treated unfairly, we have always displayed breadth of mind with great benevolence and great forbearance, and have silently endured everything in order to give the government sufficient time to find out what we are about. […] Actually, I know perfectly well why some people are bent on opposing Falun Gong. Just as reported by the media, there are so many people practicing Falun Gong. One hundred million people are indeed no small number. Yet why should having a large number of good people be feared? Isn’t it true that the more good people there are, the better, and that the fewer the bad people, the better? [2]

Even though Jiang could read all of Li’s well-intended words, he still couldn’t help assuming that others acted like he himself did, being driven only by base, petty motives. Jiang thinks that it is impossible for a person not to fear death and that anyone can be bought. He thought he could accomplish anything since the mechanisms of the entire state were under his control.

On June 7, 1999, Jiang gave a speech at the Politburo meeting of the CCP’s Central Committee regarding speeding up the effort to deal with and resolve the “Falun Gong problem.” In the speech, he described the formation of Falun Gong and its rapid spread by saying, “This is a political struggle between the Party and its enemies, both at home and abroad, over the [allegiance of the] masses and over the dominant position.”

Jiang never provided any grounds for his argument or any account as to how he arrived at his conclusion. And despite the fact that the Falun Gong always acted nonviolently and reasonably, and improved over 100 million people physically and mentally, he demanded with the weight of a dictator that all members of the CCP and the Communist Youth League (CYL), cadres in the workforce, retired officials, leaders of work units of the CCP and CYL organizations stop practicing Falun Gong and “draw a clear line in their minds.”

Based on the reaction of the Politburo to his letter written on the evening of April 25, Jiang felt that on the issue of suppressing Falun Gong, the majority of the Politburo members and even the Standing Committee members were indifferent. Government leaders, including Zhu Rongji, felt it unnecessary to treat the Falun Gong issue as a conflict between themselves and some enemy. Jiang thus decided to set up an interministerial leadership group directly under his command, a group that would be above all other government institutions. It wouldn’t be subject to restrictions by the government, the legal system, or the fiscal system, being instead able to freely give orders to persecute the Falun Gong. It was along these lines that Jiang thought of Li Lanqing.

At that time, of the seven Politburo Standing Committee members, other than Jiang all were against the persecution campaign. It was then that Bo Yibo, a high-ranking CCP official with a terrible reputation, learned of the members’ disapproval and thus, sensing an opportunity, came out strongly in favor of Jiang’s decision.

Jiang around that time decided to persuade Li Lanqing to join his side, as he had a good personal relationship with Li. Jiang threatened to label him as someone who doesn’t do things the “Party way” and who is “ruining and betraying the Party and the country.” In the end Li was swayed, and agreed to Jiang’s decision.

And so it was Jiang formed a leadership group so as to deal with Falun Gong however he willed. Li Lanqing became the director of the group. And in order to harness both the power of the sword and the power of the pen, Luo Gan and Ding Guangen were chosen as deputy directors. Jiang also appointed the Deputy Secretary of the Ministry of Public Security, Liu Jing, and other relevant heads of departments as key members of the group to combine wits and solve the “Falun Gong problem” systematically. Jiang commanded that the CCP Central Committee and each ministry and commission, of every province, autonomous region, and municipality that was directly under the central government, cooperate fully. The group, or organization, was formed on June 10, 1999, thus gaining it the name “6-10 Office.”

As to its nature, the 6-10 Office is in every sense of the term an illegal organization. There is no legal basis for either its formation or its existence. It is the same as the CCP Central Committee Leadership Group, as it was called, that came about during the Cultural Revolution. The only purpose of the 6-10 Office is to bypass the law, bypass the normal examination and approval of funds and personnel, and mobilize the entire country’s means of suppression to persecute the Falun Gong. The illegal organization’s head is none other than Jiang Zemin. All of its orders are given in secret by Jiang, who fears leaving evidence of his doings. When he sends out orders through the office he never signs his name. Whenever people in the 6-10 Office see the special orders, however, they take immediate action, knowing their origin.

It was by way of his autocratic powers that Jiang managed to circumvent the legal system and create the 6-10 Office—a body that presides over even the judicial organs at different levels. Jiang also pushed the 6-10 Office to coerce law-enforcement officials from the Central Government on down to the local level to break the law, signifying a halt to the progress made by China’s legal system over the last 20 years. The harm to Chinese society is immeasurable.

First, in the past few days, some Falun Gong practitioners have been spreading rumors such as “the Office of Public Security is going to start persecuting Falun Gong” and “Communist party members and cadres will be fired from their jobs if they practice Falun Gong” […] these are just vicious rumors, which are fabricated and that poison people’s minds. […] Second, the attitude of the Party and the government concerning normal activities for exercising the body and for fitness is very explicit. […] I want to emphasize again: no normal exercising of the body for fitness has ever been banned by any level of the government; people have the right to believe in and do a practice, and also the right not to believe in a practice.

Looking back at the speeches—speeches shared with the nation by key members of the Chinese government—it’s not hard to see that the CCP, headed by Jiang, can do a full about-face at a moment’s notice. Nothing the Party says can be trusted.

As Falun Gong’s activities were, and are, all open to the public, its followers—who believe in the values of truth, compassion, tolerance—weren’t on guard against the CCP media. Matters were complicated by the presence of many police and special agents posing as Falun Gong adherents, the goal being to collect information at countless practice sites of the group. The spies took pictures and made video recordings, gaining personal information on the coordinator of each practice site.