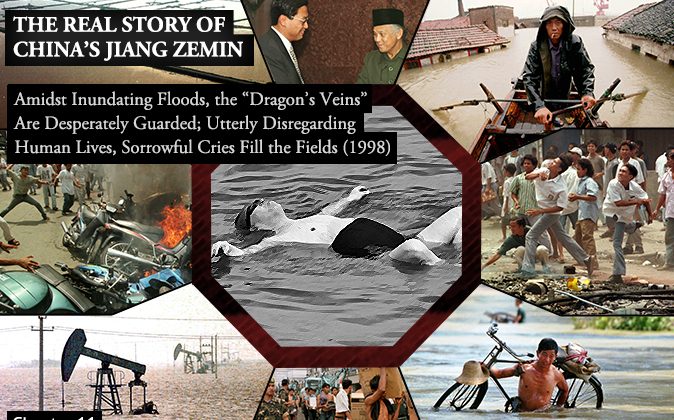 Anything for Power: The Real Story of China’s Jiang Zemin – Chapter 11

In 1998 the Yangtze River region suffered a most disastrous flood.

Although the CCP’s media unequivocally referred to this as an “extraordinarily enormous”—the type seen only once in a century, many hydrologists believed that this flood itself was not “extraordinarily enormous.” Rather, the most important criterion for measuring the magnitude of a flood is peak flow or discharge. According to information collected by the Yichang Hydrological Station along the Yangtze River, the peak flow of the 1998 flood occurred on Aug. 16, when it reached 63,600 cubic meters per second. This time peak flow was slightly higher than 60,300 cubic meters per second (a rate seen at the Yichang station once every five years or so), but far less than 72,300 cubic meters per second (a rate observed at the Yichang station only once every 20 years or so). Going on these numbers, experts considered the 1998 flood to be small in scale.

But surprisingly, the high water levels that year caused severe economic damage and loss of lives. After the disaster, which lasted over two months, the government’s internal statistics indicated that nearly 400 million people were affected, nearly 5,000 perished, and direct economic losses were over 300 billion yuan (US$36 billion).

In China, debate about the cause of the flood centered on the question of whether it was the result of nature or man-made. Many experts have come to believe that although there was a natural component to the disaster, most of the resultant damage was the product of human error. What to this day few people realize is that the losses from the disaster would have been much less severe had Jiang Zemin not decided to adamantly guard a levee that was involved and refuse to divert the flood.

On Aug. 6, 1998, the fourth flood peak of the Yangtze River’s upper region was approaching Yichang in Hubei Province. Hubei’s provincial CCP Secretary, Jiang Zhijie, and Governor Jiang Zhuping jointly submitted a request to open the Jinjiang floodway to divert the water. At noon the water level at Changsha reached 44.68 meters, exceeding the maximal water level (44.67 meters) of the previous major flood that occurred in 1954. Residents living in the floodway started moving to safe areas. Within 16 hours some 330,000 residents and 18,000 cows living in the floodway had been evacuated, but the order to use the Jinjiang floodway to divert the water never came.

The Yangtze River flood prevention plan adopted by the State Council states that once the water levels in Changsha reach 44.67 meters, the floodgate in Jinjiang needs to be opened so that waters may be diverted to the floodway. On Aug. 12 and 16, residents in the Jinjiang floodway moved twice to prepare for the water diversion. The floodgate, however, still did not open.

A day earlier on Aug. 16 at 10:30 p.m., Wen Jiabao listened to reports by meteorologists and hydrologists in Changsha and weighed whether to divert the flood. However, four hours earlier (6:20 p.m.) Jiang Zemin had issued an order that nearby military troops must all work on the levee. He commanded, “The troops stand united with the people, guarding the levee in this decisive battle—even at the cost of death—seeking a full victory.” Thus the flood diversion plan was not implemented.

The slogan “sternly prevent the flood and guard the levee even at the cost of death” was quickly spread and barked out. As the situation changed, however, with the flood growing ever higher and more fierce, and with the local government suggesting many times to the central government that the Jinjiang area floodway be used to divert the water, the proposals were not approved by Jiang.

The use of floodways to mitigate flood damage is very common in developed Western countries. Using floodways in a planned manner results in the least social, economic, and ecological damage. The cost of flood prevention is also the lowest.

The Jinjiang Floodway Project was completed in 1952. During the big flood of 1954, the Jinjiang Floodway was used three times, with the peak flood level being reduced by 0.96 meters. Experts speculated that if Jinjiang and a few other floodways had been used to divert the flood in 1998, the results could have been similar to those in 1954, lowering the peak flood in Changsha from 45.22 meters to 44.26 meters on Aug. 17. If that were the case, things would not have been so dire along the Yangtze River near Jinjiang.

The public couldn’t understand why Jiang Zemin refused to approve the experts’ proposals and so staunchly opposed diverting the water into the Jinjiang Floodway. It was said later that the decision might have stemmed from Jiang’s having believed a fortune-teller who was popular among top officials in China; the fortune teller spoke of the intricacies of “protecting the vein of the dragon.” Jiang apparently believed that if the flood were diverted into the Jinjiang Floodway by opening the floodgate, it would be the same as cutting off the “dragon’s veins.” Jiang was born in 1926, a year of the Tiger, and 1998 was the first year of the Tiger since Jiang had come to power nearly 10 years earlier. Jiang took the matter seriously, and decided to guard the levee at the cost of death. It was thus that he refused to proactively open the floodgate and divert the swelling waters.

Even though the CCP is atheist in name, many high-ranking Party officials deeply believe in fortune-telling and fengshui. [1] The story of how Mao Zedong named his personal bureau of guards the “8341 troops” is a typical example. Before Mao entered Beijing, an aged Taoist monk told Mao four numbers: 8341. Mao didn’t understand it, but he still used 8341 to name his entourage. After Mao’s death it became clear that the number meant that Mao would live until age 83, and that he would be, from the Zunyi Conference in 1935 until his death in 1976, the most powerful man in China—a span of 41 years.

Among the top leadership of the CCP it is well known that Jiang is an avid believer of fengshui and fortune-telling. After the Tiananmen Square student movement was brutally suppressed in 1989, Jiang hoped to use fengshui to extend his rule. He did three things in Beijing to this effect. The first was to add water to Baiyangdian Lake. Beijing was the capital city of six dynasties and is surrounded by mountains to the east, north, and west, and by water to the south. It was considered a location with exceptional fengshui, one that “holds the mountains and carries the river.” But the CCP’s rule brought about an environmental crisis that dried up Baiyangdian Lake. Jiang told the public that by adding water to Baiyangdian he was “restoring a pearl of northern China.” His real goal, however, was to restore Beijing’s fengshui so that his rule could last longer. The second thing he did was to increase the height of the flagpole on Tiananmen Tower. Because Mao Zedong Mausoleum is right on Tiananmen Square, with Mao’s body contained therein, the structure blighted the fengshui of the Forbidden City. Furthermore, the height of the flagpole was lower than the top of the Mausoleum, which caused “too much yin energy,” according to one fengshui master. Jiang told the public that he was “bringing glory to the country and furthering patriotic thoughts” when he increased the height of the flagpole, which became much higher than the mausoleum after the change. The third thing was to remove the dirt hill present at the Temple of Heaven. The dirt was from caves and tunnels that were dug to store food during the Mao era. It was piled west of Chaotianshen Road at the Temple of Heaven, and reached even higher than the main hall of the Temple, Qinian Hall. Jiang ordered the removal of the dirt hill and planted cypresses at the site, all as instructed by the fengshui master.

Jiang is cautious about not running into “bad luck.” Although he often travels afar, Jiang has never visited the city of Zhenjiang—the name of which, in Chinese, means literally “to suppress Jiang”—as he is afraid of being suppressed and that his luck will be ruined. He is also very sensitive to the auspiciousness of the speech of those under him. Whoever say anything that Jiang rules to be taboo will meet with punishment. Even provincial-level officials have been replaced for such minor things.

When Wang Maolin was Hunan Provincial CCP Secretary, he went to the airport to enthusiastically welcome Jiang upon the Chairman’s visit to Hunan. Wang planned to extend the very best for Jiang’s visit, and arranged everything ahead of time. But in a moment of excitement Wang told Jiang, “We follow you when we’re in Beijing, but here in Hunan you can count on me.” To the average Chinese person, this is a clear expression of the host’s eagerness to please. But Jiang, whose thinking was by then fully that of a dictator, wasn’t able to see the matter in a normal light as others would. When he heard, “here in Hunan you can count on me,” he thought Wang was hinting at trying to seize his power and grew extremely displeased. Not long after the incident, Jiang reassigned Wang to act as the deputy director of the Spiritual Civilization Leadership Team in Beijing—a position lacking any real power.

Wang knew that what he said had touched a sore spot in Jiang, and thereafter tried to show Jiang his loyalty at every opportunity. Eventually Jiang did give Wang a position with power: director of the 610 Office—an extrajudicial agency in charge of persecuting Falun Gong. Wang was sued in late 2004 by Falun Gong practitioners outside of China and is now on the list of those monitored by the World Organization to Investigate the Persecution of Falun Gong.

Jiang also likes names with auspicious meanings. People such as Teng Wensheng (“born a scholar”), Jia Ting’an (“peaceful government”), You Xigui (“lucky and prosperous”) and Wang Huning (“peace in Shanghai”) were promoted because of their names. Li Changchun was one of Jiang’s favorites because his name meant “forever spring.”

So it was that Jiang insisted on protecting the “vein of the dragon” during the 1998 flood and refused to utilize the Jinjiang Floodway. Premier Zhu Rongji and Vice Premier Wen Jiabao followed Jiang’s order with great reluctance, telling the public that diversion could result in still further economic losses. But in reality, residents living in the Jinjiang Floodway were moved to safe areas three times in preparation for the diversion and everything was ready. All people were waiting for was the order from higher up.

On Jiang’s scale of values, the lives of the millions of residents in the flood disaster areas weighed far less than his “vein of the dragon.”