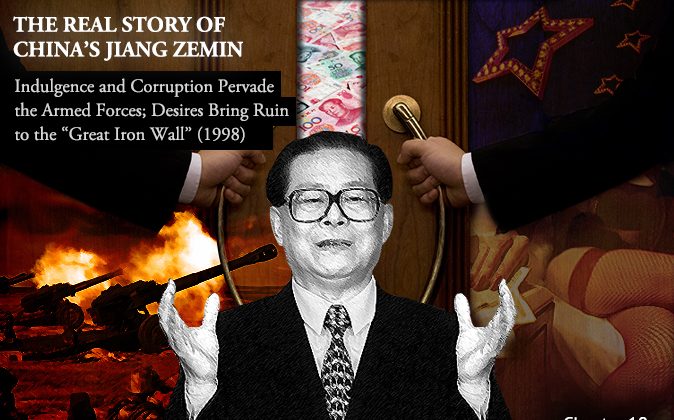 Anything for Power: The Real Story of China’s Jiang Zemin – Chapter 10

Jiang Zemin knew very well that he had no prestige or qualifications in the military. Most senior military leaders had fought on the battlefield. And most had solid connections with other military leaders, which particularly Jiang lacked. Both Mao Zedong and Deng Xiaoping once commanded large military forces and had earned the respect of China’s servicemen. In contrast, Jiang lacked not only the political background each had but also their experience in the military. Never had he so much as laid his hands on a gun.

In most normal modern societies a ruling party can only form a government by means of democratic elections. The different voices in society serve to monitor the ruling political party’s administrative authority. Poor management of the government can mean impeachment or removal from office. The military in these countries belongs to the state and not to any political party. The military’s mission is to safeguard the people’s interests and defend the country’s borders. Thus, neither conflicts among political parties nor internal conflict within any one party generally involves the military. Irrespective of which party’s candidate is elected, the military’s loyalty to the nation and obedience to the command of the nation’s highest authoritative organization as stipulated by the constitution are imperative. This is one reason democratic countries can remain politically stable despite having what are at times heated debates and tensions among parties.

However, China’s military is different from that of nations in the West. In reality, China’s only military is of the CCP and not of the nation itself. Thus the military serves as a tool of the Party as it seeks to benefit itself. The Chinese Communist Party has always emphasized that Party branches are to be established at the level of the company. Going back some time, Mao Zedong postulated the formula that “The Party commands the gun.” In other words, he who has the upper hand in controlling the military will decidedly be the victor in any intra-Party political struggle. If military power is not within one’s grasp, one’s political future lies in the hands of others.

So it was that Jiang Zemin was deeply concerned. But Jiang had his own means to control the military.

1. Promoting Officials to Gain Their Allegiance

Promotion in the military is an important matter. It is granted for meritorious achievements such as labor on bloody battlefields and protecting citizens’ homes and the welfare of the nation.

During Mao’s time, those who were made marshals and generals had surmounted untold dangers before achieving their prominent ranks. Promoted individuals would cherish the promotion and feel dignified by it. Servicemen knew that during peaceful times, times when there were few opportunities to demonstrate strength, promotion to the rank of General was no easy thing. However, under Jiang’s rule this would change, as sycophancy quickly became a shortcut to promotion in the military. The promotions of Zhang Wannian, Guo Boxiong, and You Xigui—each the product of favoritism rather than military accomplishments—are widely known among the military. The most extreme case is that of Commander Major-General Guo Boxiong of the 47th military unit. Guo was promoted to Vice Chairman of the Military Commission for merely standing guard for Jiang during the leader’s afternoon nap.

Since the restoration of the military’s ranking system in 1988, the Central Military Commission (CMC) has appointed 96 high-ranking officers to the military and police ranks of General. Alongside the 17 high-ranking officers who were appointed Generals by Deng Xiaoping on Sept. 14, 1988, the other 79 Generals were appointed by Jiang between 1993 and 2004. As for Major Generals and Lieutenant Generals, hundreds were made thus in Jiang’s era—almost as if the move was part of a casual game.

On Jan. 23, 1996, in a whimsical moment, Jiang said to those around him, “Today, let’s promote several people to General for our own enjoyment. What do you think?” Those around him were largely sycophants, and so their answer was a sure affirmation. Immediately Jiang conferred four persons with the rank of General. It was that day that Political Commissioner Sui Yongju of the Second Artillery Corps rose from Lieutenant General to the rank of General.

On Oct. 24, 1997—in one single day—Jiang promoted 152 people to General. Children of former high-ranking officials and those with family connections were specifically targeted by Jiang for support. For example, He Long’s son, He Pengfei, was enlisted in the military only after the collapse of the Gang of Four in 1976. He had served in the military for less than 20 years, yet in just one promotion he became Vice Admiral Deputy Commander. By as early as 1997 Jiang had conferred 530 persons with the ranks of General, Lieutenant General, or Major General.

On June 2, 2002, seven people were promoted to the rank of General. Senior military cadres were said to be indignant upon witnessing Jiang, during the televised ceremony, using only one hand to present the certificates of promotion to the recipients. They remarked, “Jiang Zemin doesn’t even know the most basic protocol. This is not solemn at all.”

On June 20, 2004, just before Jiang stepped down from office, he promoted 15 military and police officers to the rank of General, among whom was his trusted follower You Xigui.

Many of those conferred so flippantly with rankings and titles didn’t regard the designation as the honor it was supposed to be. They knew in their hearts that such promotional honors were not dispensed according to their merits, but rather purely as prize—a prize meant to create allegiance. It for this reason they took the honors lightly and conducted themselves in a manner anything but serious at the award ceremonies.

The promotion of veteran generals in the past was based on abilities, and recipients enjoyed immense prestige; their commands were met with uniform obedience. Now, however, officials will use whatever means possible to gain promotion. They have little respect for one another, they slander one another, create obstacles for one another’s work, refuse to cooperate, are jealous of each other, and undermine one another. One might ask: what sort of might could the military achieve with people of such caliber? A military of this sort won’t manage to win battles no matter how modernized their weapons may be.