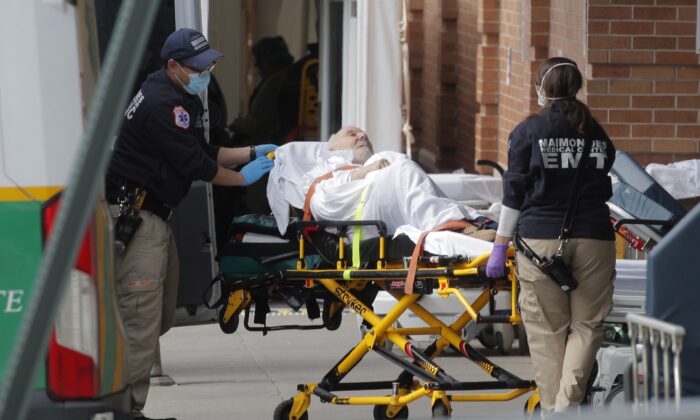 Paramedics take a patient into a hospital during the outbreak of the CCP virus in the Brooklyn borough of New York City, New York on April 7, 2020. (Brendan Mcdermid/Reuters)
By Zachary Stieber

COVID-19 is a disease caused by the CCP (Chinese Communist Party) virus, commonly known as novel coronavirus. Fears over the new illness have led to near-nationwide lockdowns, crippling the U.S. economy and keeping Americans largely at home.

Some countries are looking at cases where deceased patients had a pre-existing condition such as a heart or kidney problem and are not counting the deaths as linked to COVID-19, Dr. Deborah Birx, response coordinator for the White House Coronavirus Task Force, told reporters on Tuesday night.

“Right now, we’re still recording it, and … if someone dies with COVID-19, we are counting that as a COVID-19 death,” she said at the task force’s press briefing in Washington.

While there has been concern that rural areas haven’t been able to verify all deaths from the new disease, the death counts in New York City, New Jersey, and other places with large outbreaks are likely accurate, Birx indicated.

“I can’t imagine if someone comes in with coronavirus, goes to an ICU, and they have an underlying heart condition and they die—they’re going to say, ‘Cause of death: heart attack.’ I cannot see that happening. So I don’t think it’s going to be a problem,” added Dr. Anthony Fauci, a member of the task force.

Dr. Michael Baden, a forensic pathologist, a Fox News contributor, told the outlet later Tuesday that the decision federal officials have made is reasonable but that the count will include patients who had pre-existing conditions who may have died regardless of the CCP virus.

“In the normal course, autopsies would then determine whether the person died of the effects of the COVID virus, whether the person had a brain tumor or brain hemorrhage, for example, that might be unrelated to it, and what the relative significance of both the infection and the pre-existing disease is,” Baden said. Some autopsies might not be performed, though, because of the danger of people performing them becoming infected.

“Then you will include in those numbers some people who did have a pre-existing condition that would have caused death anyway, but that’s probably a small number,” according to Baden.

Deaths from COVID-19 in the United States are identified using the statistical code U07.1. Deaths that fit under the code are those where the new disease is reported as a cause that contributed to death on the death certificate, according to the Centers for Disease Control and Prevention (CDC), citing guidance from the World Health Organization.

“COVID-19 should be reported on the death certificate for all decedents where the disease caused or is assumed to have caused or contributed to death,” the CDC stated in an alert last month (pdf).

In separate reporting guidance, the agency said (pdf) certifiers who suspect COVID-19 in a patient can report the cause of death as “probable” or “presumed.” Medical professionals should try to test for the new disease whenever possible but it is acceptable to report COVID-19 on a death certificate without testing.

“If COVID–19 played a role in the death, this condition should be specified on the death certificate,” the CDC stated.

In another set of instructions, the agency advised medical examiners, coroners, and other healthcare professionals to exercise judgment in determining whether a patient who died had signs of being infected with COVID-19 and whether postmortem testing should take place. Signs include symptoms like fever, cough, or shortness of breath and epidemiological factors such as documented COVID-19 infections in a jurisdiction.

Because the virus can spread rapidly, professionals conducting autopsies were advised to take a number of precautions, including avoiding the use of an oscillating bone saw, limiting the number of people working on the body at one time, and take care when handling needles or other sharp objects.

Studies examining the laboratory-confirmed deaths from the 2009 pandemic of H1N1, a type of flu, found that there were likely far more deaths than reported at the time.

One set of researchers estimated that there were 15 times more deaths linked to the influenza outbreak than laboratory-confirmed deaths.

The number of deaths officially confirmed was 18,500. Researchers estimated that there were 201,200 respiratory deaths and 83,300 cardiovascular deaths associated with the pandemic.

Researchers focusing on the United States found 14,800 excess respiratory and cardiac deaths linked to the H1N1 flu between April 2009 and April 2010.

Most of those deaths took place in people under 65 years old.