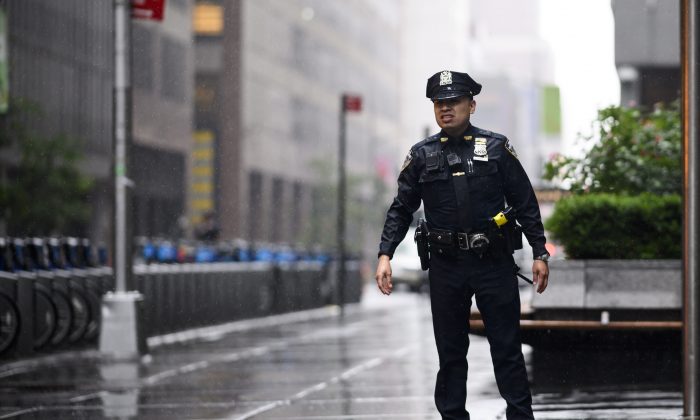 In this file image, a policeman looks down a street in midtown Manhattan in New York, on June 10, 2019. (Johannes Eisele/AFP/Getty Images)
Crime and Incidents

One of the nation’s largest law enforcement agencies said it might charge anybody caught spraying water toward police officers on July 23.

The New York Police Department (NYPD) has circulated a memo throughout the department, confirming civilians could face charges of harassment, disorderly conduct, or other crimes if they splash water on officers.

“[This applies] where an individual intentionally sprays or douses a member of service with water while performing their duties,” the memo said according to the Associated Press (AP).

We are approaching the point of no return. Disorder controls the streets, and our elected leaders refuse to allow us to take them back. As police officers, we need to draw a line. In situations like this, we need to take action to protect ourselves and the public. https://t.co/iZSXmB6PBG

It follows the sharing of viral cellphone videos of locals dousing uniformed New York Police Department patrolmen with water, sparking outrage and leading authorities to urge the force not to tolerate the behavior.

Police are investigating two incidents recently captured on video, showing four on-duty officers breaking up unruly gatherings around open fire hydrants during a recent heatwave. Police are seen in the footage being soaked themselves as onlookers jeer.

A video shows an officer arresting a suspect in Harlem. The officer appears to be hit on the head with a red plastic bucket, as he and his partner are being splashed with water. Other videos show two officers getting a drenching as they walk down a Brooklyn street. A woman can be heard saying off-camera, “Oh, they violated them.”

NYPD Chief of Department Terence Monahan revealed the department wants to make arrests in both cases. He described one case as a potential assault on an officer doing his duty, while the other was a failure of officers to respond to provocation.

“[In Brooklyn] someone thought it was all right and take a bucket of water and toss it over a cop’s head,” Monahan said according to AP. “That’s not all right—any cop who thinks that’s all right, that they can walk away from something like that, maybe should consider whether or not that this is the profession for them.”

The footage shows pranksters appear to have little to no fear of reprisal. That’s fueled accusations against New York City Mayor Bill de Blasio (D) and other liberal politicians. There are claims that their police reform policies fostered a climate of disrespect for officers on duty.

When asked about the sprayings, de Blasio suggested the two cases appear to be “very different.”

“One of which was not confrontational, the other of which was,” he told local news broadcaster NY1.

.@NYCPBA & @NYCMayor are voicing outrage after social media video showed @NYPDnews officers being doused with water while making an arrest in #Harlem. pic.twitter.com/FkyZQbozXa

The Police Benevolent Association is concerned that officers who are worried about being sprayed, now feel “frozen.”

“Disorder controls the streets, and our elected leaders refuse to allow us to take them back,” association President Patrick Lynch said according to AP.

Our anti-cop lawmakers have gotten their wish: the NYPD is now frozen. It’s not the fault of these police officers. It’s the end result of the torrent of bad policies and anti-police rhetoric that has been streaming out of City Hall and Albany for years now. https://t.co/2dxkz8cdyD

The Sergeants Benevolent Association echoes this concern, saying the liquids in the buckets could contain something more harmful than water.

“[It] could just as easily have been bleach, gasoline, or some other toxic substance,” association President Ed Mullins said according to AP.

Former New York Mayor Rudolph Giuliani, who now provides legal advice to President Donald Trump, believes the dousings would not happen if de Blasio were not a “completely lazy mayor.”

“[Morale of the officers who were involved] has been destroyed,” Giuliani told Fox News.

Incumbent Mayor de Blasio was previously criticized for delaying the dismissal of the police officers involved in the chokehold death of Eric Garner, who died in Staten Island on July 17, 2014, when a police officers put him in a headlock for 15 seconds while arresting him. A video of the incident brought police brutality into broader public awareness.