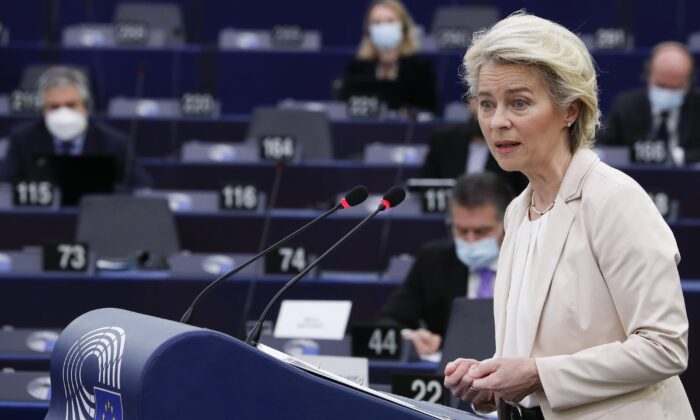 Any Aggression Against Ukraine Will Lead to New ‘Massive’ Sanctions, EU Warns Russia

The head of the European Union’s executive commission warned Russia on Dec. 15 that the 27-member bloc has additional sanctions ready if Moscow would invade neighboring Ukraine.

Von der Leyen told the European Parliament that there are already economic sanctions in place targeting multiple Russian sectors due to the country’s annexation of Ukraine’s Crimea Peninsula in 2014 and actions since that the West sees as increasingly aggressive.

Of course, we would want good relations with Russia. But this depends on Russia´s behaviour.

I call on Russia to de-escalate, pursue diplomatic channels and abide by international commitments.

The place to solve conflicts is the negotiation table. pic.twitter.com/PGyc52NMWZ

“Our response to any further aggression may take the form of a robust scaling-up and expansion of these existing sanctions,” she added. “And of course we are ready to take additional, unprecedented measures with serious consequences for Russia.”

She did not elaborate on what form any new sanctions would take.

Also on Wednesday, Ukraine’s Security and Defense Council Secretary Alexey Danilov told news agency Reuters that there is no evidence Moscow is preparing for an imminent invasion.

“Nothing has changed [over the last few days on the Russian-Ukrainian border],” Danilov said during an interview with the network. “There has been some increase in [Russia’s] troop numbers but not critical enough for us to say: this is it, it [an invasion] is going to happen now,” he added.

Von der Leyen’s warning comes days after the Group of Seven (G-7) on Dec. 12 induced a similar warning after it held a two-day summit in the English city of Liverpool.

The foreign policy chiefs from the United States, the United Kingdom, Canada, France, Germany, Italy, Japan, and the European Union, called on Russia to “deescalate, pursue diplomatic channels, and abide by its international commitments on transparency of military activities.”

“Any use of force to change borders is strictly prohibited under international law,” they said. “Russia should be in no doubt that further military aggression against Ukraine would have massive consequences and severe cost in response.”

The warnings come amid rising tensions over a Russian troop buildup on the Ukrainian border, which is seen as a sign of a potential invasion.

The Kremlin has repeatedly denied all Western accusations, saying it does not plan any attack on Ukraine, and assertions about a possible attack are lies.

“There are no grounds for these assertions,” Russia’s Federation Council Speaker Valentina Matviyenko told reporters earlier this month. “They are lies, nonsense and it is dirty politics.”