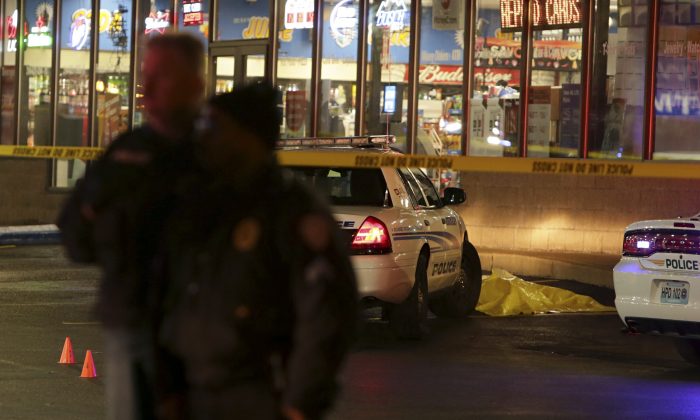 A white St. Louis Police officer was “fearing for his life” when he shot and killed a black teenager in a Missouri city–just miles from where an officer killed Michael Brown months earlier, sparking renewed protests early Wednesday morning.

The teen, identified as 18-year-old Antonio Martin, was allegedly armed and pointed his weapon at the involved officer at a gas station in Berkeley, Missouri, said the St. Louis Police County.

But the mayor of Berekely, Theodore Hoskins, stressed that the shooting was quite different from the deaths of Michael Brown, the unarmed black teen who was shot and killed in nearby Ferguson, and Eric Garner of New York City.

“You couldn’t even compare this to Ferguson or the Garner case in New York,” said Hoskins at a Wednesday press conference.

Hoskins said that one difference from the Brown and Garner confrontation was that it appears that Martin initiated the confrontation with the officer, who was not identified. “At this point, our review indicated that the police did not initiate this,” he added.

After word of the incident spread, a crowd of protesters congregated around the scene of the crime, suggesting that emotions among many St. Louis-area residents are still raw over the Michael Brown shooting and a grand jury verdict not to indict Ferguson officer Darren Wilson.

Officials said that at least two police officers were hurt in the protests, and photos uploaded to Twitter indicate that someone set off an explosive device near a gas pump, prompting Hoskins to say that Berkeley isn’t like Ferguson.

Both Hoskins and St. Louis County Police Chief Jon Belmar extended their condolences to the family of Martin and the officer involved in the shooting.

St. Louis County Police, in a statement, said the officer was carrying a “routine business check” and was investigating a theft at a Mobil gas station.

“The Berkeley police officer exited his vehicle and approached the subjects when one of the men pulled a handgun and pointed it at the officer,” the department said in a statement. “Fearing for his life, the Berkeley officer fired several shots, striking the subject, fatally wounding him. The second subject fled the scene.”

Authorities released a surveillance video of the shooting, and they said a gun was recovered from the crime scene.

Belmar said Martin had run-ins with police before and was “known to law enforcement.” He was arrested for assaults, armed robbery, armed criminal action, and stealing,

“This doesn’t make any sense for them to kill my son like this,” the mother of Martin, Toni Martin-Green, told the St. Louis Post-Dispatch. “I am trying to be calm.”