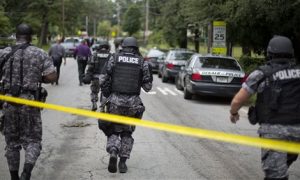 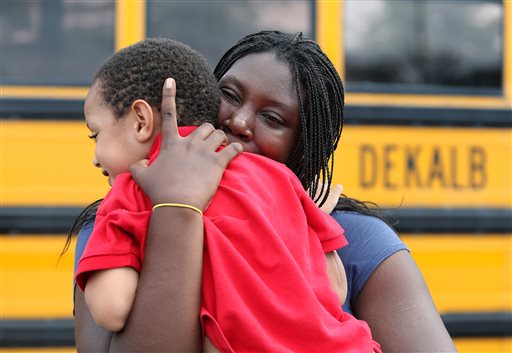 LaTrease Akins hugs her 5-year-old son Mark Wheeler after being reunited following a shooting incident at McNair Discovery Learning Academy Tuesday, Aug. 20, 2013 in Decatur, Ga. A teen opened fire with an assault rifle Tuesday at officers who shot back at the Atlanta-area elementary school, the police chief said, with dramatic overhead television footage capturing the young students racing out of the building, being escorted by teachers and police to safety. No one was injured. (AP Photo/Atlanta Journal-Constitution, Ben Gray)
US

No one was injured on Tuesday when gunman Michael Brandon Hill terrified students at the Ronald E. McNair Discovery Learning Academy in Georgia, after bookkeeper Antoinette Tuff talked him off the figurative ledge.

She shared with him about the recent hardships in her life after he threatened to take his own life and that of police officers and others around him.

“It’s OK, we all have situations in our lives,” she told him, as she later recounted to USA Today. She told the 20-year-old if she can overcome tragedy, he can too.

Hill told Tuff he had no reason to live and he apologized for what he was doing. She told him about the hardships of her failed 33-year marriage and the stress she experienced opening her own business. He listened. She was eventually able to convince him to lay down his weapon, empty his pockets, and surrender.