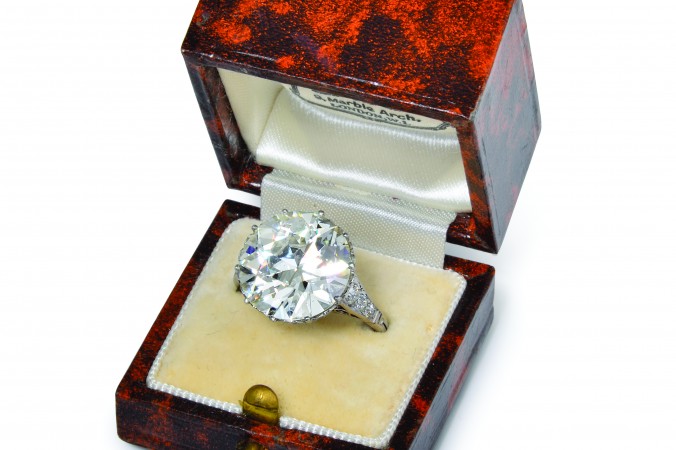 A very fine Edwardian diamond ring by Shreve, Crump & Low, with a center stone of approximately 9cts. Circa 1910.
Fashion

Perusing the jewelry counters on Fifth Avenue will lead you through endless displays of sparkly engagement rings. But for those looking for a rare treasure, it is worth looking into antique rings before making your selection.

Antique engagement rings are almost always one of a kind, as there were not the modern means of mass production there are now. They are sought after for more than just the quality of diamond—they offer the wearer a piece of history.

There are many factors to consider, such as the period of the piece, when and how it was designed, the condition and craftsmanship, wearability, materials used, and of course the diamond. Each ring has its own history and story told through the elements that make up the ring.

Different Periods
The three most common periods are Victorian, Edwardian, and Art Deco. Each has their own unique characteristics based on the materials available at the time, the fashion trends, and women’s role in society.

The Victorian era runs from the mid to late 1800’s, a time before platinum or white gold. All Victorian rings featured yellow gold for the structure of the ring with the diamonds mounted in silver. The silver backing added weight, but allowed the color of the diamonds to shine through.

“Some Victorian era engagement rings had beautiful gold work , but overall, they were all about showcasing the stone,” said Anna Lin, owner of Anna Lin Jewelry, who deals exclusively in antique jewelry.

The turn of the 20th century brought the Edwardian period and the advent of platinum in jewelry. “Platinum allowed jewelers to accentuate the feminine form by creating beautiful and intricate patterns,” Lin said.

The lighter metal is much stronger than gold, allowing the jewelers of the time to design pieces with milgrain, lace, bows, and garlands. The pieces were delicate and dainty, reflective of the woman of the time.

The Edwardian period came to an abrupt halt with the start of World War I, in 1914. Many men left to join the fight, leaving the woman to join the workforce and talk care of the house . During the war, almost no new jewelry was produced, leaving the metal for the war effort.

The pieces were bold, flashy, and geometric, incorporating interesting patterns and colors, an ode to the woman who came out of the war with a much stronger attitude after working in the factories and being the head of households. The fashion of the time also reflected the new attitude, with the flapper dresses replacing the conservative pre-war attire.

The Diamond
Like many of their modern counterparts, diamonds were the center stone of choice in antique engagement rings. But it is important to note, antique rings will have old cut diamonds, which look very different from the stones of today.

Diamond cutting tools were not as precise, leading to diamonds cut with less perfection, but more character. “Victorian stone cutting methods left the stone with a chunky, heavier characteristic, one a lot of our customer have grown to love,” said Lin. “You cannot walk into most jewelry stores and find stones as unique as these.”

Lighting also played a key role. During the Victorian era, people used candlelight and daylight to view their jewelry, as there was no electricity.

“The old cut stones have less facets, allowing the inherent beauty of the stone to shine through,” Lin said. “With modern cut stones, it’s about a formula to give you the most light and sparkle.” Lin pointed out if you look above many diamond counters now, you will see dozens of spotlights to bring out the sparkle.

As with many other collectibles such as furniture, watches, and cars, the value of antiquity is not something you can assess immediately.

“As you understand more about the history, the way of life, and way jewelry would have been worn at that time, you find wearing something of that period carries a beautiful historical quality that you will not find in a modern setting,” Lin said.