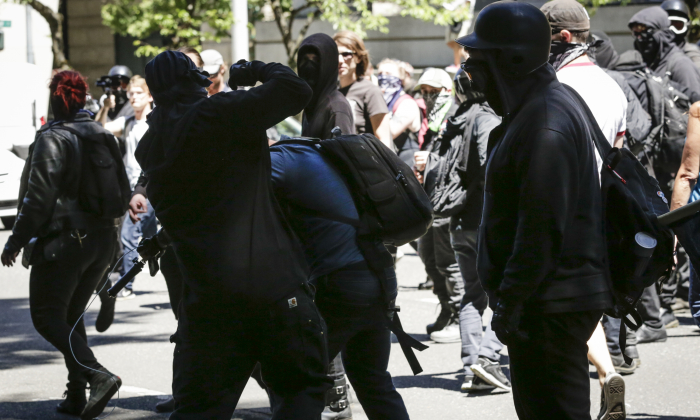 “I just got beat up by the crowd—no police at all—in the middle of the street and they stole my GoPro,” Ngo said. “They punched me several times in my face and head. I’m bleeding.”

As police and paramedics arrived, Ngo told the first responders that he had reported assaults from Antifa twice earlier in the day.

Portland Police reported that some of the “milkshakes” thrown at the rally were actually quick-drying cement. It’s unclear if Ngo was hit by one of the cement cups.

This mode of operation traces back to the roots of the “antifascist” movement in Germany, where the group was used by the Soviet communists to foment a revolution. The German antifascist movement likewise indiscriminately labeled its enemies fascists as an excuse for violence. The 2016 annual report by Germany’s domestic intelligence service notes that from the viewpoint of the “left-wing extremist,” the label of “fascism” as pushed by Antifa often does not refer to actual fascism, but is merely a label assigned to “capitalism.”

Quillette magazine, Ngo’s employer, wrote in an editorial, “They attacked him for the simple reason that he has challenged their ideological propaganda—an Antifa tactic that any true fascist would recognize and applaud.”

According to Quillette, Ngo suffered a brain hemorrhage, forcing him to spend the night at a hospital. The attack resulted in an outpouring of support for Ngo, including a fundraising campaign to cover the cost of his security and medical needs.

The day before the attack, Ngo wrote on Twitter that he was worried about being attacked at the rally because Antifa had singled him out by name in their event description online.

“I am nervous about tomorrow’s Portland Antifa rally. They’re promising ‘physical confrontation’ & have singled me out to be assaulted. I went on Tucker Carlson last year to explain why I think they’re doing this: They’re seeking meaning through violence,” Ngo wrote.