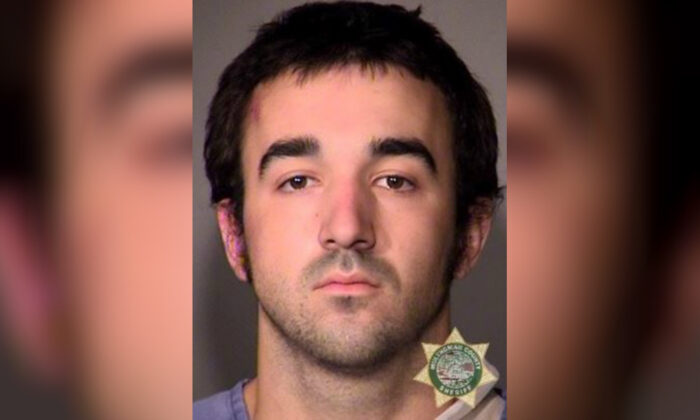 An Antifa militant was sentenced to nearly six years in prison on Nov. 1 for striking a man in the head with a baton during street violence in Portland, Oregon, in June.

Gage Halupowski, 24, pleaded guilty to second-degree assault for hitting a man named Adam Kelly, a conservative demonstrator who wrote on Facebook that the blows to his head caused a concussion as well as wounds that required 25 staples to close.

Defense attorney Edward Kroll said his client made “a really terrible decision” and said Kelly didn’t deserve what happened to him, reported the Oregonian. He said that because Halupowski was captured on video hitting Kelly, the defendant felt he was forced to take the plea deal.

He also said that at least two other people hit Kelly.

Prosecutor Melissa Marrero said Halupowski hitting Kelly in the back of the head was “completely unexplainable, completely avoidable, and didn’t need to happen.”

Halupowski was originally charged with second-degree assault and assault on a public safety officer.

Marrero disagreed with Kroll’s argument that the sentence was too severe, saying it was appropriate considering the assault and how severe Kelly’s injuries were. She said another person was indicted from the violence in June, and her office is probing other incidents that took place on the same day, June 29, including investigating more people who may have been involved in the attack against Kelly.

“My office has individuals charged on both sides of the political spectrum,” Marrero said. “We are not picking sides based on political affiliation, political views, or anything like that.”

Journalist Andy Ngo was attacked in Portland on the same day, as were several others. Video footage captured at least six people that appeared to be with Antifa—a far-left group that espouses violence—hitting and spraying Ngo while he held up his hands to try to protect himself from the barrage.

None of those assailants have been identified; their faces were obscured, as is typical for Antifa members. Portland Police Chief Danielle Outlaw has called for an anti-mask law because of the difficulty of identifying people wearing masks who commit crimes.

James Stocks and Maria Dehart, two other Antifa militants, were arrested and charged with harassment and disorderly conduct. Stocks, 21, who admitted to assaulting a group of conservatives by hurling a milkshake at them, pleaded no contest to harassment and was sentenced on Oct. 29 to probation for one year and community service for 50 hours, according to The Oregonian.

Dehart has pleaded not guilty.

Portland has been the epicenter of Antifa activity this year. The group gathers every time a conservative group holds an event, and officers have regularly failed to prevent violent clashes, which are often started by Antifa.

The sentencing came just weeks after two prominent sentences in New York. An Antifa member who attacked a supporter of President Donald Trump was sentenced to over a year in prison while two members of the Proud Boys, a right-wing group that has clashed with Antifa in the past, were each sentenced to four years in prison for assaulting Antifa militants.