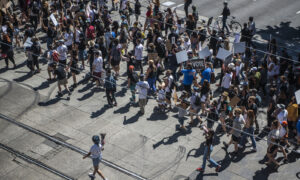 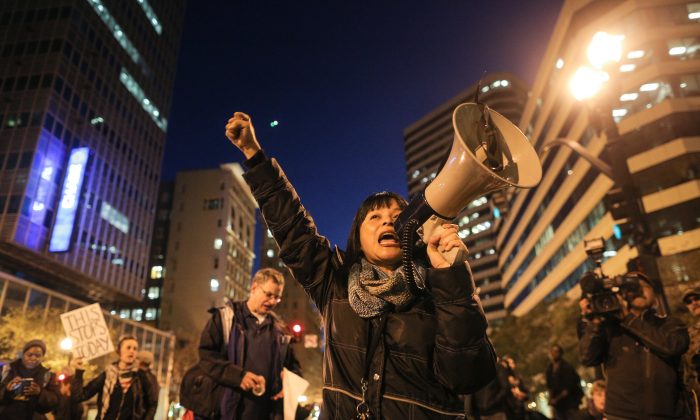 Yvette Felarca of Oakland speaks to the crowd on the second night of demonstrations following a Staten Island, New York grand jury's decision not to indict a police officer in the chokehold death of Eric Garner on December 4, 2014 in Oakland, California. (Elijah Nouvelage/Getty Images)
Crime and Incidents

Californian authorities on Wednesday announced the arrest of Yvonne Felarca (also known as Yvette Felarca), a widely-known leader of a violent “anti-fascist” group in the San Francisco Bay Area.

The 47-year-old was arrested Tuesday in Los Angeles after authorities charged her with inciting and participating in a riot and assault likely to cause great bodily injury, the Sacramento County District Attorney’s Office said.

She is well known in the Bay Area as the public face and leader of radical left-wing group called ‘By Any Means Necessary‘ (BAMN). The group describes itself as the ‘Coalition to Defend Affirmative Action, Integration, and Immigrant Rights and Fight for Equality By Any Means Necessary.’

BAMN has been seen at the forefront of violent protests and riots over the past few years to get what they want and push and forcefully advocate their agenda.

Felarca has been involved in such protests such as the Occupy movement and the 2017 Berkeley riots at the University of California. She has been on multiple television appearances and more recently been a fierce protester against President Donald Trump and other conservative leaders.

In February, Felarca appeared on Fox News’s Tucker Carlson Tonight after the Berkeley riots to defend her belief that the violent protests were justified in shutting down a speech scheduled to be delivered by right-wing provocateur Milo Yiannopoulos.

Felarca was not the only one arrested—on July 20 a second counter-protester, 56-year-old Michael Williams, was arrested for similar violent charges, Washington Post reports.

Felarca and her group have publicly advocated using violence to get their message across. In a 2014 interview with the New York Times she promoted riots.

In February, a change.org petition was circulated to declare Antifa a terrorist organization.

“Terrorism is, in its broadest sense, the use of intentionally indiscriminate violence as a means to create terror or fear, in order to achieve a political, religious, or ideological aim. ANTIFA have demonstrated time and time again that they’re more than willing and able to fill these criteria,” the petition reads.