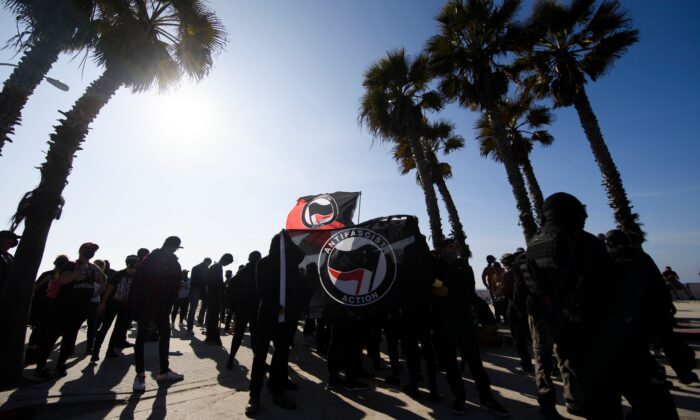 Counter-protesters, some carrying Antifa flags, wait to confront a "Patriot March" demonstration in support of then President Donald Trump in the Pacific Beach neighborhood of San Diego on Jan. 9, 2021. (Patrick T. Fallon/AFP via Getty Images)
By Brad Jones

Six of 11 alleged assailants connected with Antifa, a far-left extremist group, have taken plea deals and pled guilty to charges related to violent attacks on supporters of outgoing President Donald Trump at a “Patriot March” in San Diego shortly after the 2020 election.

Five defendants pled guilty on Nov. 18, just over a week after Erich “Nikki” Louis Yach was sentenced to four years and eight months in prison for his role in the violence near Crystal Pier in Pacific Beach on Jan. 9, 2021. Yach was the first of the 11 to be sentenced.

Yach earlier pled guilty to charges of conspiracy, assault, and the unlawful use of tear gas.

At his sentencing hearing, GG Hubbard, Yach’s spouse, urged the court to send Yach—a biological male who identifies as female—to a women’s prison. Yach has spent nearly the past two years in a men’s prison and will be credited for time already served.

“I want to make sure she gets put in the correct facility according to her gender,” Hubbard told the court.

Hubbard claimed Yach is “not violent” and said incarceration in anything but a women’s facility was “violating the law” and “political and fascist nonsense.”

San Diego County District Attorney Summer Stephan announced in June that a criminal grand jury had two weeks earlier delivered 29 indictments against all 11 defendants, including “conspiracy to commit a riot, use of tear gas, assault with a deadly weapon, and assault by means likely to produce great bodily injury.”

“Antifa uses force, fear, and violence to further their interests and suppress the interests of others. The objective of this conspiracy was to incite and participate in a riot,” the district attorney’s office said.

The defendants named in the indictments are from Los Angeles and San Diego counties and are all “affiliated with Antifa,” according to a statement from the district attorney’s office in December 2021. The named are Alexander Akridgejacobs, Jesse Merel Cannon, Brian Cortez Lightfoot Jr., Christian Martinez, Luis Francisco Mora, Samuel Howard Ogden, Bryan Rivera, Faraz Martin Talab, and Jeremy White.

On Jan. 2, 2021, Antifa supporters posted calls for a “counterprotest” and “direct action” against Trump supporters on social media and then, a week later, gathered with other “uncharged co-conspirators” dressed in black garb with Antifa insignia to confront those participating in the Patriot March, the office stated.

According to the district attorney’s office, such alleged actions included “assault, battery, assault with deadly weapons, arson, and vandalism.”

Videos posted online showed one of the masked, black-clad protesters carrying an “Antifascist Action” banner and another with a sign saying “No Nazis in PB”—a reference to Pacific Beach—as the group of about 100 shouted “Racists go home!” at Trump supporters.

The indictments accused the Antifa-affiliated group of planning the attacks and using a baseball bat, flagpole, stun gun, and tear gas on their victims. They were also accused of throwing a wooden lawn chair at a woman.

Prosecutors also allege some Antifa members in the crowd chased down several minors whom they thought were part of the Patriot March, sprayed them with mace, and pushed one to the ground. The victim was later transported to a hospital for treatment of a concussion.

Other “victims included a journalist [taking] photos, a dog that was maced and a business that was also vandalized,” prosecutors said.

The Antifa rioters allegedly threw eggs, rocks, and bottles and sprayed mace at officers after police declared the dueling protests an unlawful assembly and tried to disperse the crowd.

All the defendants pleaded not guilty in June.

None of the Trump supporters or other bystanders were charged with any crimes.

“Video evidence analysis shows that overwhelmingly the violence in this incident was perpetrated by the Antifa affiliates and was not a mutual fray with both sides crossing out of lawful First Amendment,” the district attorney’s office stated in June.