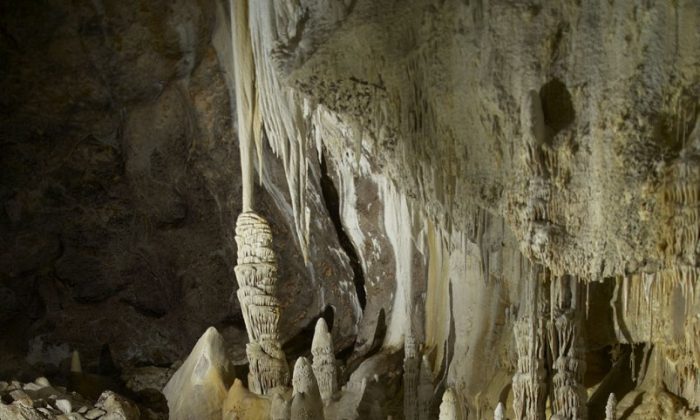 A researcher at “Pearlsian Gulf” with calcite formations in the background. (Max Wisshak/speleo-foto.de)
Beyond Science

New clues to the origins of antibiotic resistance have been found deep underground inside Lechugilla Cave in New Mexico by North American researchers.

Located in Carlsbad Cavern National Park, the site is one of the world’s largest, deepest caves, believed to have been isolated from human contact for more than 4 million years.

The cave is encased by a layer of impermeable rock, meaning water can take as long as 10,000 years to arrive in its deepest regions, thus protecting it from infiltration by antibiotics. Lechugilla Cave was discovered in 1986 and access has been restricted to only a few scientists and cavers annually.

A team of researchers camped inside the cave as part of their mission to collect bacteria from deep and isolated recesses. Back at the lab, they studied the samples for antibiotic resistance.

These bacterial strains do not cause disease in humans and have never been exposed to human antibiotics. However, all were found to be resistant to at least one antibiotic, while some were resistant to up to 14 different drugs.

Overall, they demonstrated resistance to just about every antibiotic currently used by physicians.

“Our study shows that antibiotic resistance is hard-wired into bacteria, it could be billions of years old, but we have only been trying to understand it for the last 70 years,” said study co-author Gerry Wright at Canada’s McMaster University in a press release.

While this may sound like bad news, there are positive lessons to be learned.

“This has important clinical implications,” Wright noted. “It suggests that there are far more antibiotics in the environment that could be found and used to treat currently untreatable infections.”

The team also identified a new type of resistance–not yet seen in the clinic–in some bacteria that are distantly related to Bacillus anthracis, which causes anthrax.

“We can say to doctors, ‘while this isn’t a problem right now, it could be in the future so you need be aware of this pre-existing resistance and be prepared if it emerges in the clinic. Or you are going to have a problem’,” said study co-author Hazel Barton at the University of Akron, Ohio in the release.

This new research could shed light on where and how bacteria acquire resistance to antibiotics, now a globally important question with the development of superbugs like Staphylococcus, which have become resistant to multiple antibiotics.

Much of this resistance is actually derived from harmless bacteria living in the environment, Wright said.

“Most practitioners believe that bacteria acquire antibiotic resistance in the clinic,” he explained. “As doctors prescribe antibiotics, they select for members of the community that are resistant to these drugs.”

These microbes then spread and after some time, the bacteria that cause infections all become resistant with extreme cases resistant to at least seven drugs and requiring surgery to remove the infected tissue.

The paper was published in Journal PLoS ONE on April 11 and can be accessed here.