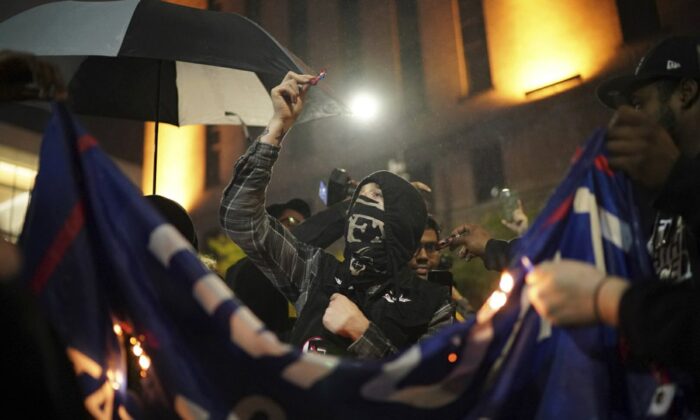 Protesters burn a banner outside President Donald Trump's campaign rally at the Target Center, in Minneapolis, on Oct. 10, 2019, in Minneapolis. (Jeff Wheeler/Star Tribune via AP)
Crime and Incidents

Hundreds of people protested outside President Donald Trump’s rally in Minneapolis Thursday, to a bonfire of MAGA memorabilia and chants of “Nazi scum!”

Compiled footage from outside Target Center, the rally venue, shows police looking on as protesters chant, “Hey, hey! Ho, ho! Donald Trump has got to go!” and people standing around a fire consuming a stack of items including a red “Make America Great Again” hat and an American flag.

The Blaze reporter Elijah Schaffer shared footage from the scene, which showed protesters lifting barricades, pointing lasers at people capturing photographs or video, and one person waving around a communist flag.

“The situation outside the Trump rally in Minnesota is quickly deteriorating,” Schaffer captioned his post. “Left wing protestors are destroying barricades. A protester can be seen waving the Chinese flag in front of riot police. While people in Hong Kong wave American flags for freedom, we wave Chinese flags.”

The situation outside the Trump rally in Minnesota is quickly deteriorating

A protestor can be seen waving the Chinese flag in front of riot police. While people in Hong Kong wave American flags for freedom, we wave Chinese flags pic.twitter.com/XVl551kyqZ

While Schaffer mentioned that it was a Chinese flag, it appears, upon closer examination, to have been the flag of the former Union of Soviet Socialist Republics, or USSR, which collapsed in 1991.

Meanwhile, over 20,000 supporters of the president had filled the venue, while even more waited outside. Trump campaign manager Brad Parscale reported the numbers on Twitter.

Cell phone video posted by Star Tribune reporter Chao Xiong showed Trump supporters walking through a crowd of protesters, who were shouting, “Lock him up” and “Shame on you.”

Xiong interviewed two rally attendees, Craig and Penny Siewert, who said they support Trump “because he stands for most of the values that I support” and “he’s done a lot for this country.”

“It was deafening,” Penny Siewert said, describing the experience of wading through the crowd of protesters, adding, “they have the right to be here, too, but they could do it a little more peacefully.”

“Childish,” her husband said, adding, “they screamed right in your ear.”

According to Fox, a reporter for The Washington Post posted a video on Twitter that appeared to show a protester punch a Trump supporter in the head. The crowd could be heard shouting “Nazi scum! Off our streets!”

‘They Want to Erase Your Vote’

The Minnesota rally is the first since Democrats began proceedings two weeks ago to remove Trump from office, which the president framed as an effort to claw back his 2016 electoral victory.

Trump arrived in Minnesota amidst the escalating impeachment drama.

Democrats allege Trump abused the power of his office to “pressure” Ukraine into investigating 2020 Democratic candidate Joe Biden, and his son, Hunter Biden. Trump denies the allegations, insisting he was trying to weed out corruption in a country that was due to receive hundreds of millions of dollars of U.S. military aid.

Trump fell about 45,000 votes short of beating Democrat Hillary Clinton in Minnesota in 2016. He has had staff in the state since June building a network to turn out supporters next November, and the well-funded Trump campaign says it will spend tens of millions of dollars to try to win the state.

“We are going to win this state,” Trump said Thursday.