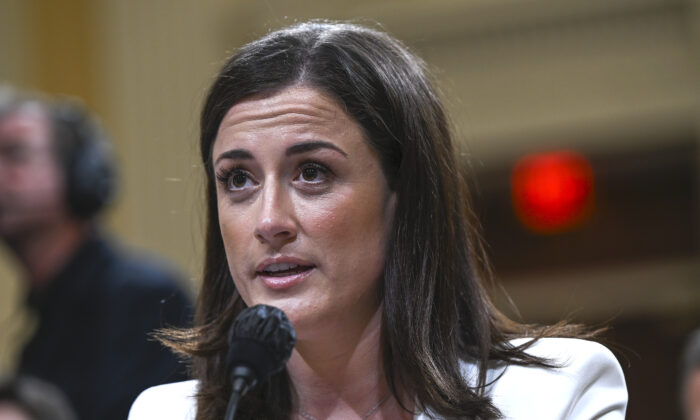 During an appearance before the Democrat-dominated House Jan. 6 committee, Hutchinson made claims about Trump’s alleged behavior on Jan. 6 which raised eyebrows among conservative and Republican commentators, who generally dismissed Hutchinson’s claims as outlandish.

The testimony provided by Hutchinson, which has since been denied by both Trump and the Secret Service, cast Trump in a sharply negative light, portraying Trump on and before Jan. 6 as being moody and unable to restrain his temper.

However, despite later turning on Trump, documents obtained by Insider appear to show that Hutchinson continued to work on Trump’s post-presidential team well into 2021—staying on the team for months after the events of Jan. 6.

According to the documents, obtained under a Freedom of Information Act request after an initial struggle by the current administration to withhold them, Hutchinson served as a “coordinator” for Trump’s post-presidential office from about January 20, 2021, to April 1, 2021. Post-presidential teams are not paid for out of pocket by former presidents, but rather continue to receive taxpayer support; as “coordinator,” Hutchinson made an annual salary of $90,000 at taxpayers’ expense.

Hutchinson’s continued position is in stark contrast to her high-flying condemnations to the House Jan. 6 panel.

Speaking about the events of Jan. 6, Hutchinson said: “As an American, I was disgusted. It was unpatriotic. It was un-American. We were watching the Capitol building get defaced over a lie. And it was something that was really hard in that moment to digest knowing what I’d been hearing down the hall in the conversations that were happening.”

Even as Hutchinson continued to work under Trump, others on his staff who shared her pronounced sentiments on the events of Jan. 6 began to quickly retire from his office where they felt obligated to as a matter of conscience, which many former White House staffers and advisers have since said that they did.

Before the documents were unveiled, Hutchinson’s movements in the aftermath of Jan. 6 were hotly-contested.

Trump himself indicated that he barely knew Hutchinson in a post to Truth Social following her testimony.

“I hardly know who this person, Cassidy Hutchinson, is, other than I heard very negative things about her (a total phony and ‘leaker’), and when she requested to go with certain others of the team to Florida after my having served a full term in office, I personally turned her request down,” Trump claimed. “Why did she want to go with us if she felt we were so terrible? I understand that she was very upset and angry that I didn’t want her to go, or be a member of the team. She is bad news!”

On the other hand, the documents seem to align with a Bloomberg report from early 2021 suggesting that Hutchinson, among others, would be joining Trump in Florida.

The Washington Post, by contrast, reported in June 2022 that Hutchinson did not hold full-time employment in any official capacity following the end of Trump’s term in office.

Though the issue remains contested, these documents seem to settle Hutchinson’s whereabouts in the months following Jan. 6.

In her testimony, Hutchinson related several alleged disputes between Trump and the Secret Service on Jan. 6.

According to Hutchinson, the first of these came during Trump’s rally at the Ellipse earlier in the day. The rally, Hutchinson said, looked too small to Trump.

She said he blamed this on the use of magnetometers by the Secret Service. Magnetometers, used by security forces to detect weapons, had been placed at the entrance to the Trump rally that day.

Upset by the smaller crowd size, Trump allegedly asked the Secret Service to remove them.

Later, Hutchinson said, Trump grew frustrated after the Secret Service refused to allow him to join supporters at the Capitol protest because the area had not been secured.

Hutchinson then claimed that Trump lunged at a Secret Service agent in anger after they refused to take him to the Capitol before trying to seize the steering wheel from the driver of his vehicle.

Trump called parts of Hutchinson’s testimony to the Jan. 6 committee a “fake story.”

In a post on Truth Social, Trump said, “[Hutchinson’s] Fake story that I tried to grab the steering wheel of the White House Limousine in order to steer it to the Capitol Building is ‘sick’ and fraudulent, very much like the Unselect Committee itself. Wouldn’t even have been possible to do such a ridiculous thing.”

Trump also referenced another claim made by Hutchinson during the testimony in his denial of the charges.

According to Hutchinson, Trump threw his plate of food against the wall in the White House after AP unveiled an interview with then-Attorney General Bill Barr claiming that no widespread fraud had taken place in the 2020 election, a claim that remains disputed.

Following the outburst, Hutchinson claims, she went to help the White House valet clean a splatter of ketchup off the wall.

“Her story of me throwing food is also false,” Trump stated, adding, “and why would SHE have to clean it up, I hardly knew who she was?”