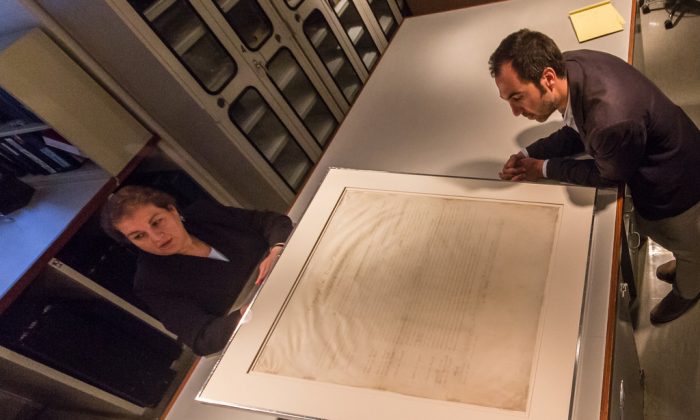 Anti-Slavery Passage Was Cut From Declaration of Independence

NEW YORK—A rare copy of Thomas Jefferson’s draft of the Declaration of Independence, which calls slavery “a cruel war against human nature,” is now on exhibit in New York City.

According to William Stingone, a New York Public Library (NYPL) curator of manuscripts, Jefferson “was upset with some of the changes” in the final version and wrote out five copies of his version to send to friends. In Jefferson’s version, underlined words and sections show parts that were later removed.

Jefferson’s wording of the Declaration is one of two rare American historical documents now on display for a brief period before July 4 in New York City. An earlier version of the Bill of Rights is being shown with it at the NYPL’s Schwarzman Building on Fifth Avenue.

Stingone was on hand last week during a special preview of the documents before they went on public display.

The largest underlined section not used in the final document in Jefferson’s version of the Declaration is about the institution of slavery, which Stingone said was one of the colony’s grievances with the monarchy in England.

Jefferson’s underlined portions read, in part, that slavery was “…violating its most sacred of life and liberty of a distant people, who never offended him, captivating and carrying them into slavery in another hemisphere, or to incommensurable death in their transportation thither.”

Jefferson went on to call the king’s actions “piratical warfare” and to point out that the practice of slavery had not been halted despite attempts from the colonies to do so.

“…determined to keep open a market where MEN should be bought and sold, he has prostituted his negative for suppressing every legislative attempt to prohibit or to restrain this execrable commerce.”

Jefferson then accuses the king after making an “assemblage of horrors” through slavery, of also intending to use those made slaves to fight against colonists.

“He is now exciting those very people to rise in arms among us, and to purchase that liberty of which he has deprived them, by murdering the people upon whom he also obtruded them.”

“What stands out for me is the fundamental principles that we constantly hear brought up in school and politics,” said Stigone. He added that seeing “Jefferson’s own editorial changes, and struggles with the proper word to use” is also fascinating.

“It humanizes the people who made them.”

Alongside the Declaration will be an exhibition of a copy of the Bill of Rights—with two additional amendments that were ultimately taken out before the final version we know of today was approved. It is the first time the documents have been displayed together.

The two documents are part of the NYPL’s Emmet Collection, a treasure trove of 94 volumes of manuscripts and extra-illustrated books, put together over a period of fifty years by Dr. Thomas Addis Emmet. Dr. Emmet was an early collector of American manuscripts from the revolutionary era, as well as a renowned surgeon. The Emmet Collection was bought by John S. Kennedy and gifted to the NYPL in 1896.