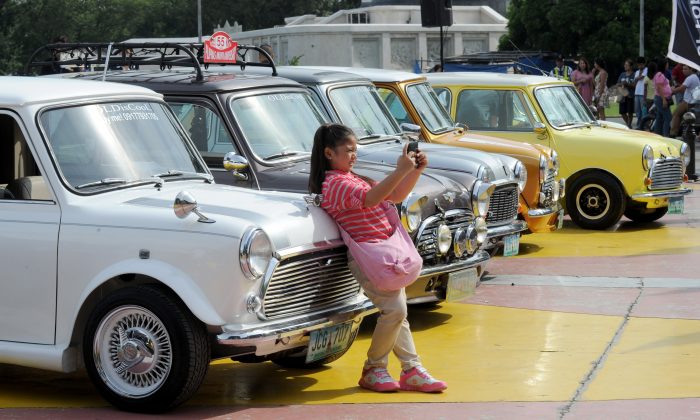 A girl takes a selfie at a Mini Cooper display in Manila on August 10, 2014. The anti-Selfie bill is being heavily criticized. (AFP/Getty Images)
Asia & Pacific

Anti-Selfie Bill in Congress in the Philippines: What is House Bill 4807 All About?

The so-called Anti-Selfie Bill, or House Bill 4807, is in the Philippines Congress right now–and causing outrage.

The bill seeks to bar taking photos of people without their permission, defining “intrusion of personal privacy” as “any person who willfully intrudes into the personal privacy of another, without the consent of that person and with the intent to gain or profit therefrom, shall be civilly liable to the offended party.”

“HB 4807 will create a chilling effect on media and would especially affect citizen journalism. It would punish with civil suit taking photos,video or even audio recording anything claimed as a personal/ family matter even of public officials and personalities,” Bayan Muna Rep. Carlos Zarate told ABS-CBN.

“Even an innocuous selfie with public figures at the background would be liable for ‘intrusion of privacy’. This is absurd and we urge our colleagues to reconsider.”

The bill says the following acts are considered an intrusion of privacy.

-trespassing on private property in order to capture any type of visual image, sound recording or other physical impression of any person

The critics of the bill are many and are attempting to fight its passage.

“It would seem that people from the media and journalists can be targets of the proposed measure. Worthy of being emphasized is the phrase ‘with intent to gain or profit therefrom.’ In case a complaint is filed in court against a photojournalist, can lack of intent to gain be used as defense?” said Jose Torres Jr., board member of the Photojournalists Center of the Philippines.

“It must be clearly defined what can be classified for ‘gain’ or ‘profit.’ News outfits – newspapers, magazines, television, online publications, radio, and news wire agencies – are basically for profit organizations. There must be clear provisions that specify that news gathering must be exempted from this section.”

Filipinos also took to Twitter to criticize the bill.

“It’s things like the Anti-Selfie Bill that make Philippine politics one big joke,” said another.

“Anti Selfie bill? Come on, is that all you can think of?” said yet another.