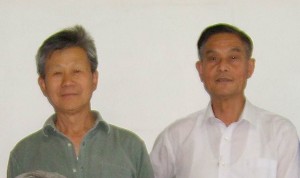 The 17th Chinese Communist Party (CCP) National Congress officially began on October 15. Surviving victims of the Anti-Rightists Movement fifty years ago are commemorating the anniversary. Sixty-one surviving victims of the movement have started a petition and submitted an open letter to the CCP's 17th National Congress. The letter urged the CCP to lift the ban on free speech, apologize for its past actions, and compensate victims for twenty years' lost wages. More than two thousand people have signed the petition.

The CCP's Anti-Rightists Movement fifty years ago is one of the greatest injustices in recent Chinese history. More than 550,000 were victims of the crackdown. Today, fewer than 20,000 of the victims are still alive.

“An Open Letter to CCP Central Committee, People's Congress and the State Council Commemorating the 50th Anniversary of the Anti-Rightist Movement” was written by sixty-one right-wing elders on March 3, 2007. More than two thousand people have signed the petition, The CCP has not yet responded to the petition. The surviving victims are using the 17th CCP Congress as an opportunity to ask for justice.

Jiang Suiming, age 74, was originally a technician at Beijing Architectural Research. He was labeled as a “Rightist” in 1957 and sent to a labor camp in Xinjiang. He was tortured at the camp. He eventually managed to escape. In 1978, the government ended its crackdown. During this twenty-year period, Jiang was without a salary.

The Chinese regime has avoided giving a straight answer regarding physical and emotional compensation for the victims of the movement. “The CCP owes us an apology and monetary compensation,” said Jiang. “Even after we old people die, our children will carry on demands for compensation.”

Wang Yaoqiuo, age 77, is a biology professor at Beijing University. He received no pay for twenty-one years after he was labeled a rightist. Wang feels that the six major civilian life issues being discussed at the 17th Congress are not important. How to exercise democracy should be the focus of the 17th Congress.”

“Whether it's Marxism, Leninism, or Communism, they have all made people suffer in both the Soviet Union and China,” said Wang. “Communism should be abolished and replaced with democracy. I hope the CCP can give up its dictatorship, give power back to the people, and give the military back to the country.”

Li Changyu, age 74, is a retired teacher. In May, he received an invitation to attend an oversea discussion panel titled “50th Anniversary Commemoration for the Anti-Rightist Movement.” On May 9, he went to Beijing to apply for a visa. The very next day, his home was searched and he was put under tight surveillance.

“The CCP has a problem trying to figure out how to deal with the 'rightists,'” said Li. “They have no legal grounds to stop them, so they resort to oppression. The CCP came into power by pointing guns at people. They are not good at dialogue or dealing with problems in a civilized manner, so they are always oppressing people.”

Li believes all the historical problems that have been piled on the Chinese regime should be dealt with by talking with the people. All levels of the regime must learn to talk with the people.