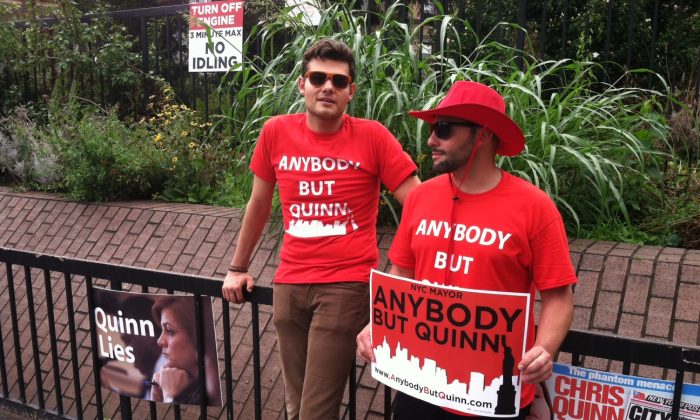 Vincent Di Santo (R) and Noah (asked for last name not to be used) at an Anybody But Quinn rally in Greenwich Village, New York City, Aug. 28, 2013. (Genevieve Belmaker/Epoch Times)
New York

NEW YORK—With just 12 days left until the mayoral primary election, one of the more surprising groups hitting the streets to petition voters isn’t backing one candidate. It is backing any candidate—except City Council Speaker Christine Quinn.

Members of the group, called Anybody But Quinn, wear uniform red T-shirts emblazoned with its motto and group name in white lettering.

At rally in Greenwich Village on Aug. 28, in addition to the several pet dogs that participants brought with them to the rally, there was a healthy dose of huge poster boards with unflattering photos of Quinn and blunt slogans.

“Quinn Lies,’ stated one board, and another proclaimed “term limits betrayal,” while others asked “public service or self-service”” and “real estate or real corruption?”

One poster board simply had a photo of a dead carriage horse, a pictorial commentary on Quinn’s opposition to an alternative plan that would have done away with horse drawn carriages in the city. The group said that the horses sometimes get involved in accidents with vehicles and are hurt or killed.

Though from a distance Anybody But Quinn seems a bit fringe, up close it appears to be a well-oiled machine, complete with help from a strategic consulting firm, The Advance Group.

A project of the PAC New York City is Not for Sale, Anybody But Quinn was initiated by Local 1180 President Arthur Cheliotes, NYCLASS (an animal protection advocacy organization), and political activist Wendy Kelman Neu.

The group petitions under a multitier platform focused on term limits, better sick leave policies, and animal rights. At the rally, though, protecting animals seemed to be the most prominent concern.

“Animals deserve a paw at City Hall,” Allie Feldman, one of the event organizers, told the crowd of about 50. Feldman is executive director of NYCLASS.

Others at the rally echoed a similar sentiment, repeatedly pointing to Quinn’s record on animal-related issues, including a bill they said she stopped, which would have required fire sprinklers in pet stores.

The group plans 12 rallies between Aug. 29 and Sept. 10 to include distributing fliers and outreach to voters. From Sept. 6 to Sept.10, it will have 11-hour shifts. On Election Day they will start at 6 a.m. and won’t stop until 9 p.m., trying to convince people to cast a vote for any candidate on the ballot but Christine Quinn.

“The bottom line is we want a mayor who has compassion for all New Yorkers,” said Feldman, who, when asked whether there is a candidate they do endorse, just answered flatly, “anybody but Quinn.”

They just might get their wish. An Aug. 28 Quinnipiac poll showed New York City Public Advocate Bill de Blasio with 36 percent of likely voters and Quinn with only 21 percent.

“Did you see the numbers for our man?” one woman with the group asked to the person standing next to her. Nearby, a man sang a one-line ditty to himself, humming, “Anybodyyyy but Quinn.”

Their unusual tactic in a mayoral election that has been to a great degree about narrowing down the huge field of candidates to find the right person for the job doesn’t sit well with everyone, though.

“Vote FOR something!” scolded one very well-dressed woman passing by. Had she stayed long enough she would have learned that they will vote for someone—as long as it’s not Quinn.