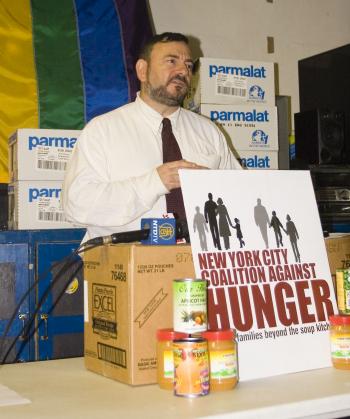 FEED THE POOR: Joel Berg, executive director of the New York City Coalition Against Hunger (NYCCAH), calls for more government to fund the fight against poverty, in response to the new national poverty report. (Helena Zhu The Epoch Times)
US

NEW YORK—After the release of the U.S. Census Bureau’s poverty data on August 26th, anti-poverty activists came together to point out the monetary inequality as the number of people beneath the poverty line increased.

In the Sylvia Rivera Food Pantry, located in Manhattan, the executive director of the New York City Coalition Against Hunger (NYCCAH) Joel Berg, emphasized the need for the government to close the huge gap between the rich and poor.

“There were 64 billionaires in New York City last year according to Forbes,” said Berg. “Their combined net worth equals coincidentally 64 times the annual earning among all 1.5 million people of poverty.”

According to the “Income, Poverty, and Health Insurance Coverage in the United States” report, out of the five boroughs of New York, the number of people in poverty in Manhattan has actually dropped from 294,707 to 279,522 from 2000 to 2007. Other boroughs haven’t been so fortunate, as poverty rates in Queens, Brooklyn, and Staten Island have all increased, while little has changed in the Bronx.

“The biggest decrease is actually in Manhattan, and we’ve seen this a few years in a row,” said Berg. “My belief is not that poor people in Manhattan are getting less poor, it’s that they can no longer afford to live in Manhattan anymore.”

The real median household income in the United States has actually increased 1.3 percent, reaching $50,233 between 2006 and 2007 based on the data. The percentage of the State’s total income, from the top 20% wealthiest New Yorkers, also increased from 52.6 percent to 53.2 percent. However, for general workers, the minimum wage of New York has remained $7.15, with little changes seen in the past few years.

“Certainly the increase of poverty is increased by the increase of population,” said Berg. “It is clear that immigrants are among the poorest people in New York. I would say they do some of the hardest and dirtiest low waged jobs.”

Back in April, Governor David Paterson and the Legislature cut 16% of the budget for the Hunger Prevention and Nutrition Assistance Program. Low income New Yorkers depend on State funding in this area to support food banks, pantries, and kitchens.

“Only when it comes to poverty, the one issue defined by the absence of money, that the Conservatives say money is going to solve problem,” said Berg. “The mayors and others keep on saying jobs [would solve poverty], but I would say that it should be living wage jobs [that solve the problem].”

For the full report of “Income, Poverty and Health Insurance Coverage in the United States: 2007” please refer to the link: