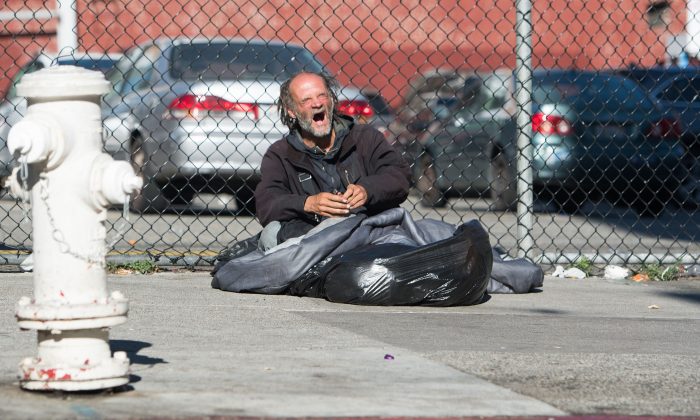 A homeless man yawns along a sidewalk in downtown San Francisco on June 27, 2016. (JOSH EDELSON/AFP/Getty Images)
US News

Driven by a rapid growth in homelessness, San Francisco, considered by some to be an enlightened bastion of left-wing social engineering, now resembles some of the worst slums on the planet, according to international anti-poverty activist Leilani Farha.

Farha is hardly the first to observe that San Francisco is in a state of decline, brought on by what critics say are the city’s and state’s irresponsible tax-and-spend policies and a stubborn refusal to deal with the homelessness problem.

But in the current age of political polarization, liberals and Democrats have tended to reflexively defend the deep-blue city and state from criticism, which largely emanates from political conservatives and social realists. Even though residents are fleeing the Golden State in droves for lower-tax states like Texas, they insist that California is a model for the nation and is doing fine.

For example, President Donald Trump criticized San Francisco and one of its most famous residents, House Speaker Nancy Pelosi (D-Calif.), on Jan. 20.

“Nancy Pelosi has behaved so irrationally & has gone so far to the left that she has now officially become a Radical Democrat,” Trump wrote on Twitter. “She is so petrified of the ‘lefties’ in her party that she has lost control…And by the way, clean up the streets in San Francisco, they are disgusting!”

The next day, San Francisco Mayor London Breed, a Democrat, shot back on Twitter: “We are cleaning the streets – just like @SpeakerPelosi is cleaning up after the mess that is your presidency.”

California Gov. Gavin Newsom, a Democrat who used to be the mayor of San Francisco, recently said California was the “envy of the world.”

But Farha, also at the left end of the political spectrum, refuses to toe the party line.

In 2014, Farha was named the U.N. special rapporteur on adequate housing. She has traveled to slums in Manila, Philippines; Jakarta, Indonesia; Mexico City, Mexico; and New Delhi and Mumbai in India. The situation in San Francisco is on par with those large overseas cities, she said.

Last fall, she presented a report to the U.N. General Assembly, saying that in her view, the human rights of homeless individuals in the San Francisco Bay Area were being violated. She previously had reported that homeless people in San Francisco and nearby Oakland were being denied “access to water, sanitation and health services, and other basic necessities.”

During a recent visit to San Francisco, Farha came upon a young homeless man who had made his makeshift home beneath a highway underpass. He was cooking quesadillas on a small, open-flame stove.

“The last time I had seen someone cooking on the sidewalk like that was in India, with the pavement dwellers there, and here I am in San Francisco in a state with the sixth largest GDP in the world,” Farha said.

Farha is currently executive director of Ottawa-based Canada Without Poverty, a left-wing activist group that regards poverty as a human rights violation. According to her official biography, she “has been at the forefront of applying international human rights law to anti-poverty issues in Canada, and is known internationally for her work on housing rights and women’s economic and social rights.”

San Francisco has the highest rate of street homelessness in the United States. On any given night, more than 4,300 citizens sleep outside.

“Most homeless people in San Francisco sleep in parks and on sidewalks but a growing number are living out of their vehicles, helping fuel an overall 17 percent increase in homelessness in the last two years,” CBS San Francisco reported, based on a study released by the city.

“Officials say they can’t keep pace with the number of people who become homeless in a city where the median sales price of a house hovers at $1.4 million and median rent for a one-bedroom apartment is around $3,700.”

Another measure of a city’s decline is hygiene, and San Francisco has been getting worse for years. Human feces have been reported on almost every city block in recent years, Fox News reported. According to the city, there were 28,084 reports of human waste on the streets in 2018, up from 5,557 reports in 2011.