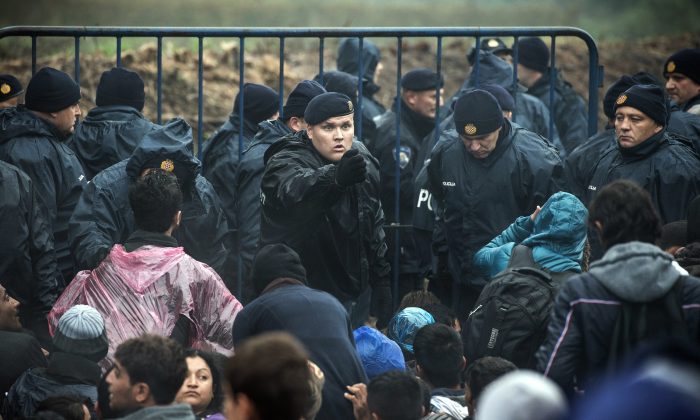 WARSAW, Poland—Even before the Paris attacks, the mood in Central Europe was decidedly anti-migrant, with fences going up on borders, a Syrian beaten on a Polish street last week and the rhetoric sharp across the region. Now the bloodshed unleashed by Islamic extremists is deepening fears of Muslims and threatening to create an atmosphere even less welcoming for those fleeing war in the Middle East.

On the Slovenian-Austrian border over the weekend, the armies of both nations strip-searched migrants on their westward march amid heightened security, causing large numbers to build up at a refugee camp.

The shifting mood could threaten European efforts to find unity on the migration crisis. A new anti-migrant government in Poland already is casting doubt on whether it will take all 7,000 refugees the previous government agreed to accept.

Poland, Hungary and other countries across the region — many of them multicultural lands in the past — have been largely mono-ethnic Christian societies since the mass killings and expulsions of World War II, and resistance there has been especially stiff toward Muslims, who are largely seen as threats to national identity. Many of these nations faced threats to their very nationhood in the past, with Poland wiped off the map in the 19th century, Hungary losing two-thirds of its territory after World War I, and nations across the region subjected to Soviet control during the Cold War — all factors seen as contributing to anxieties over nationhood.

That one of the suicide bombers appears to be a Syrian who passed through Greece in October is also deepening a belief among many that the refugees should be seen as potential terrorists.

“All of Europe should now be opposed to the migrants,” said Cristian Albu, a legal expert in Romania. “We have to prevent what happened in Paris happening elsewhere.”

Even some of the migrants themselves are worried about the security gaps that have come with the largest movement of refugees across European borders since World War II. Some say they fear that the same Islamic State extremists they are fleeing will infiltrate the masses of migrants, carry out more attacks and create greater distrust of legitimate asylum-seekers.

“Europe made a big mistake. They should not allow all the people,” said Emile Tarabeh, a customs officer from Syria at a migrant center in Presevo, Serbia, who is hoping to reach Sweden. “It will be more difficult now” for the real refugees, he said.

Joanna Fomina, a migration expert at the Polish Academy of Sciences, said expressions of anti-Muslim sentiment have exploded online since the Paris attacks, with many people essentially saying “I told you so” or saying Muslims should be gassed liked Jews during the Holocaust.

“This attack will increase public and political polarization over the issue of refugees, convincing those who are already prejudiced that their fears are well-grounded,” Fomina said. “We also can expect more Euroskepticism — negative attitudes towards the EU and migration go hand in hand.”

On Monday, Hungarian Prime Minister Viktor Orban, who has taken a prominent anti-migrant stance, criticized the EU as “adrift.”

Recalling that Hungary been criticized as inhumane for building fences on its borders to keep migrants out, Orban said: “But the question is: What is more humane? To close the borders to illegal border-crossers or put the lives of innocent European citizens at risk?”

On Monday in Poland, the right-wing government of Prime Minister Beata Szydlo was sworn in. It won an election last month after party leaders made strong anti-migrant statements, with party leader Jaroslaw Kaczynski warning that migrants are carrying “parasites and protozoa” and other diseases that could harm native Europeans. Critics likened those words to the kind of language Adolf Hitler used against the Jews.

Since Friday, members of the government have indicated that they will treat asylum-seekers as possible security threats, possibly not fulfilling the agreement to accept 7,000.

“Every shadow, every doubt regarding their past will make their asylum application automatically rejected,” Poland’s new foreign minister, Witold Waszczykowski, said over the weekend. He and other government members support the idea of sending humanitarian aid to the Syrian refugees in Turkey, Jordan and Lebanon — but not letting them into Europe.

“The tens of thousands of young Syrians who jump out of the rubber rafts and don’t ask for water, food or clothes but ask where they can charge their mobile phones could, with our help, fight to get their country back,” Waszczykowski said.

“Can you imagine a situation in which we send our troops to fight for Syria, while hundreds of thousands of Syrians sip coffee on Unter den Linden” — a boulevard in Berlin — “or at the old town square and watch how we fight for their security?” Waszczykowski said in Warsaw.