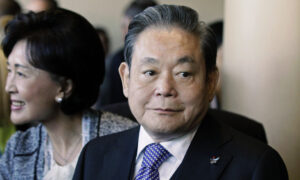 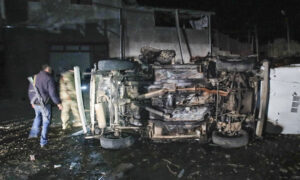 A prominent ant-Kremlin activist who was apparently poisoned in Moscow was saved by prompt medical treatment, his Berlin doctors claim.

Pyotr Verzilov publishes an online Russian-language news portal–and has close ties with the Russian activist group Pussy Riot, Reuters reported. He participated in—and was jailed for—an incident during the 2018 World Cup soccer match when he and three female Pussy Riot members, dressed as police officers, rushed onto the pitch and disrupted the match.

Nikulshina told the Russian-language website Meduza, that Verzilov first reported that his sight was fading. He then began to have difficulty speaking and walking. He was admitted to Moscow’s Sklifosovsky hospital on Sept. 11, but doctors there claimed there they could find nothing wrong with him.

Verzilov flew to Berlin on Sept. 15 and was admitted to the Charite hospital. Doctors there told Reuters that he was suffering from anti-cholinergic syndrome—he had been poisoned with a substance that blocked the neuro-transmitter acetylcholine, effectively shutting down parts of the victim’s nervous system.

“I don’t believe his position was seriously life-threatening in hospital, but we can imagine an unfavorable outcome if he’d been alone at home,” Dr. Kai-Uwe Eckardt, Verzilov’s doctor at the Charite hospital, told Reuters.

Since its founding in 2011, Pussy Riot has been highly critical of Russian President Vladimir Putin.

“Probably it was an assassination attempt and if not it was intimidation,” she said. “No one who is taking part in political activities in Russia right now can really be safe.”

Tolokonnikova and two other Pussy Riot members were jailed for two years for invading a Moscow cathedral and staging a pro-feminist, anti-Putin protest.

Verzilov has dual Canadian-Russian citizenship. His hospitalization is covered by his Canadian health insurance.

On Sept. 13, Canadian Prime Minister Justin Trudeau called the incident a “concern, obviously, given actions of recent months by the Russians in the UK,” according to the BBC.

In 2006, another Russian intelligence officer, Alexander Litvinenko, was poisoned, presumably by Russian agents.

Litivenko, a former FSB and KGB officer, fled indictments in Russia and sought, and received, political asylum in the United Kingdom.

Litivenko met in London with two former KGB officers on Nov. 1, 2006, and began showing signs of poisoning later that day. Doctors determined that he had been injected with a radioactive isotope, polonium-210. He died on Nov. 22.

Litvinenko claimed that Russian President Valdimir Putin was behind his assassination.