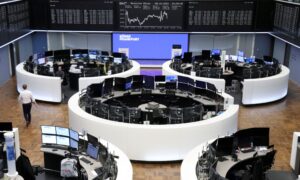 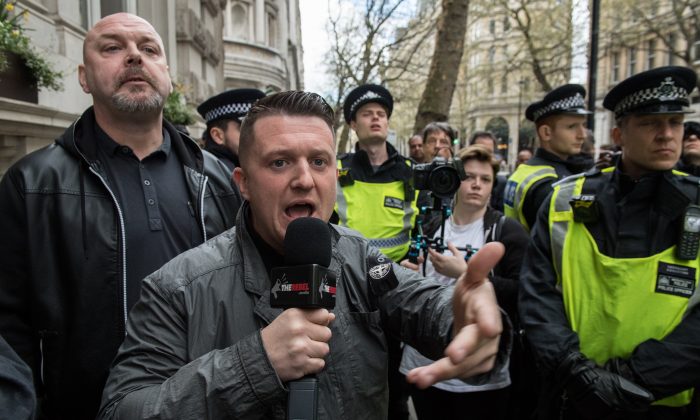 Tommy Robinson is escorted by police during a protest on April 1, 2017 in London, England. (Chris J Ratcliffe/Getty Images)
UK

LONDON—English Anti-Islamic campaigner Tommy Robinson is free after a jail sentence handed to him for live-streaming outside the trial of a grooming gang was quashed.

Robinson, whose real name is Stephen Yaxley, originally pleaded guilty to contempt of court—for violating reporting restrictions—and was jailed for 13 months. He now faces a fresh hearing after the Court of Appeal found problems with the way the case was handled.

The case stirred interest around the world, with Robinson’s supporters claiming his right to free speech was being stifled by the legal system and PC culture because of his ongoing criticism of Islam, with hundreds of thousands signing an online petition to free him.

Meanwhile, legal experts said that he had simply violated a run-of-the-mill court order that ensured a rape trial didn’t collapse.

The appeals court ruling on Aug. 1, however, found various problems with the way the case had been handled, including an error on the official court order suggesting Robinson had been convicted of a criminal offense.

“Errors like this have serious consequences upon the classification of prisoners, resulting in the deprivation of privileges and release on license,” said a statement from the Court of Appeal.

The appeals court also said that the judge should not have summarily sentenced Robinson, noting the ruling had come just five hours after he had started live-streaming video from outside the court

“Whilst the judge was entitled to deal with the contempt himself, the urgency went out of the matter when the appellant agreed to take down the video from Facebook,” said the appeal court ruling.

Robinson’s solicitor Carson Kaye said in a statement, “The rule of law and the right to a fair hearing are fundamental to every individual and this ruling is an example of the procedural safeguards of our system, and its potential for protecting every citizen equally.”

Robinson is now on bail pending a new hearing into the allegations of contempt of court.

Robinson, founder of the English Defence League (EDL), has been a long-time critic of Islam and the “Islamification” of Great Britain, his outspoken views often earning him the label of “far-right activist” and “racist.”

Robinson has closely followed the historical cases of sexual abuse by predominantly Asian grooming gangs, identified by some as Muslim grooming gangs, that have emerged recent years. In the UK, “Asian” often refers to people from the Indian subcontinent, typically Pakistan, or even middle east.

One inquiry in 2014 estimated there were 1,400 victims of grooming and sexual exploitation in Rotherham between 1997 and 2013 by a group of predominantly Pakistani men.

Some reports have concluded that these gangs were able to thrive in part because of a culture of political correctness within police forces and local authorities.

On July 26, the secretary of state Sajid Javid ordered research into the ethnic origin of grooming gangs. Counter-extremism organization Quillam reported in 2017 that 84 percent of people convicted of child grooming-gang offenses since 2005 were Asian.

Robinson had been following a trial in Leeds Crown Court.

On May 25, live-streamed video from outside the court captured the moment Robinson was arrested. The video mysteriously disappeared a few hours later from Facebook but not before it had been seen by hundreds of thousands of people.

During the ensuing two-day silence from the British media, social media exploded with claims that Robinson had been secretly jailed without trial, interpreted by some as the draconian stifling of free-speech and abandonment of due process.

Two days later, reasons for the silence of the media were revealed, along with confirmation that Robinson had indeed been jailed.

The rape trial had been subject to a court order that banned reporting until after the completion of the trial. Such court orders are not commonplace, but are used from time to time in the British court system.

Explaining how Robinson’s live-streaming was in contempt of court, the judge originally said, “No one could possibly conclude that that was likely to be anything other than highly prejudicial to the defendants in the present trial. … If the jurors in my present trial get to know of this video, I will no doubt be faced with an application to discharge the jury.”

The judge also ruled that media could not report on Robinson’s sentencing, because doing so would touch on the rape trial.

The Leeds trial was the second of three related trials involving 28 men charged with rape, and the judge had ordered that media reporting could not be done until the completion of the final trial, expected to start in September.

The court lifted some restrictions on reporting only following the storm of social media posts, conspiracy claims, and overseas media reports that came in the hours and days following Robinson’s arrest.

When he was arrested in Leeds, Robinson was already on an 18-month suspended sentence (a kind of probationary order) for breaching a similar court order at trial in Canterbury. The appeals court upheld the judgment of contempt of court in the Canterbury case.

Ukip leader and supporter of Robinson, Gerard Batten, tweeted, “A word of appreciation for the appeal court today. They held up the best traditions of English law. Fair and impartial. But the conduct of the judge in the Leeds case needs looking at. That wasn’t fair or impartial.”