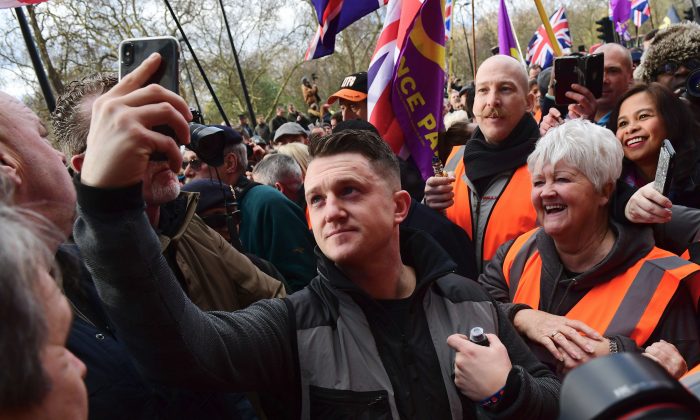 LONDON—British anti-Islamic campaigner Tommy Robinson has been permanently banned from Facebook and Instagram for posts that the platforms said violated their policies on “hate speech.”

Facebook said that Robinson had “repeatedly broken” their standards.

“Tommy Robinson’s Facebook Page has repeatedly broken these standards, posting material that uses dehumanizing language and calls for violence targeted at Muslims,” the company said in a statement.

“He has also behaved in ways that violate our policies around organized hate,” they added.

The ban represents the latest in a series of actions taken by social-media platforms to attempt to stem the flow of what they call “hate speech.”

The term is defined by Facebook as “anything that directly attacks people based on what are known as their ‘protected characteristics’—race, ethnicity, national origin, religious affiliation, sexual orientation, sex, gender, gender identity, or serious disability or disease.”

They alleged Robinson had been taking part in events with individuals they deem to be “hate figures,” such as the Proud Boys and Gavin McInnes.

However, they didn’t provide specifics of the posts that violated their terms, and an email to their press team to clarify the matter went unanswered.

Tech publication Wired questioned why Facebook had taken the action now, considering Robinson had been on the platform for many years and had amassed over a million followers.

Other right-wing commentators, such as Milo Yiannopoulos, haven’t yet been banned, although Yiannopoulos was removed from Patreon after he was also alleged to be associated with the Proud Boys.

“It seems the company is concerned by claims from the right that conservative voices, in both the U.S. and the UK, [believe] their free speech is under attack. It’s possible that Facebook’s desire to be unbiased has some effect on [its] decision-making in taking down accounts,” he said.

Facebook said they wrote to Robinson on Jan. 24 to give him a final warning, but had subsequently discovered more “hate speech” on its platform.

Robinson told CNN Business that “tech giants [are] working alongside the establishment in order to silence criticism.”

“The more you try to censor me, the more people will want to hear from us,” he said.

Last year, Robinson was jailed for 13 months over alleged contempt of court for live-streaming outside an ongoing court case involving accused Muslim child-rape gangs. He was released on bail after an appeal judge decided the original judgment was “flawed.”