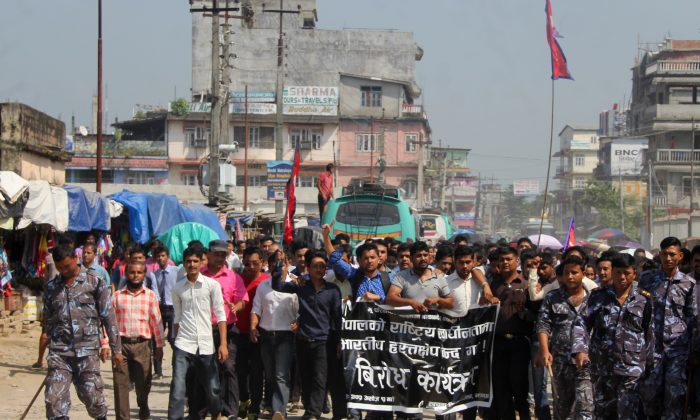 KATHMANDU, Nepal—Nepal feels like it is being choked. It’s running out of gasoline. Medical supplies are becoming scarce. All because of an unofficial economic blockade imposed by neighboring India from where Nepal gets almost all its essential supplies.

Many Nepalese believe that India has been retaliating against their government since Sept. 20, when it approved a new constitution seen by New Delhi as discriminatory to an ethnic Indian community—the Madhesi—living in Nepal’s border districts.

For months as Nepalese lawmakers were debating the draft constitution, these areas witnessed violent protests by the Madhesis during which at least 45 people were killed. Hours after the constitution was passed by an overwhelming majority of lawmakers, the violence escalated.

Soon after, Indian trucks—which trundle daily across the borders, through the plains, and up Nepal’s hills toward the capital, Kathmandu—stopped. While 100 or so trucks crossed over on Wednesday, Sept. 30, more than 1,000 were left waiting at the border with shipments including medicine, gasoline, cooking fuel, and produce going to rot. By Thursday afternoon, nothing more had moved.

Authorities in both India and Nepal assure they are working through their difference and that supplies will resume soon. But neither side can say when that might be.

“Why is India imposing a blockade against us? Don’t we have the right to draft our constitution?” asked Nirmala Rai, a school teacher who participated in a demonstration near the Indian Embassy in Kathmandu on Monday.

Officially there is no blockade, and India says truckers are simply afraid to enter Nepal and end up as victims of the violence.

But Nepal’s government says that Indian security personnel are not allowing cargo trucks to cross the border.

The small, landlocked Himalayan nation depends on its giant neighbor to the south for all of its oil and most of its trade. Historically the two majority-Hindu nations have been close allies, sharing an open border crossed regularly by more than 3 million Nepalis who hold jobs in northern India.

But Nepal has also felt ignored by India in recent years. And India has been unnerved by China’s growing influence in the country, which India considers to be within its sphere of influence. The two Asian giants deployed their largest-ever foreign aid interventions following Nepal’s devastating earthquakes earlier this year.

But the warmth generated from India’s recent overtures appears to have chilled, and an irritated Nepal pushed back against what it saw as coercive diplomacy.

But the warmth generated from India’s recent overtures appears to have chilled, and an irritated Nepal pushed back against what it saw as coercive diplomacy.

Nepal was nonplussed by India’s displeasure with the constitution, expressed by New Delhi a day after the document’s approval. The Indian foreign ministry said New Delhi had “consistently argued that all sections of Nepal must reach a consensus on the political challenges confronting them.”

India’s former foreign secretary Shyam Saran took the accusations further, saying in an op-ed published Monday in the Indian Express newspaper that Nepal’s “major political parties, representing the old high-caste-and-hill elite, saw this as an opportunity to push a flawed constitution through the Constituent Assembly.”

Khadga Prasad Oli, who is expected to soon become Nepal’s next prime minister under a power-sharing deal between the country’s two ruling parties, said India “should not delay in welcoming our new constitution.”

He called the blockade “very sad” and attributed it to exaggerated reports of dissatisfaction “among some small political parties and leaders.”

India has worried that Nepal’s border violence will spill over into its northern states of Uttar Pradesh and Bihar, where tens of thousands from the same ethnic Madhesi community live.

The Madhesis are upset that the constitution divides the country into seven new states, with some borders slicing through their ancestral homeland in the southern plains. The Madhesis, along with several other small ethnic groups, also want the states to be larger and be given more autonomy over local matters.

India’s public declaration of unhappiness irked Nepalese. Social media websites have been flooded with anti-India comments, and the hashtag label #BackoffIndia has been trending on Twitter for days.

India has expressed particular concern over the weeks of protests leading up to the constitution’s passage. More than 45 people were killed, many in police crackdowns, though there have been no deaths for at least 10 days as people from Nepal’s southern plains stage sit-ins at major border points with India hoping to force Kathmandu to meet their demands.

Nepal’s home ministry spokesman Laxmi Prasad Dhakal noted that supply trucks had not stopped plying when violence was going on, but only after the constitution was approved. He said that of the 100 trucks that crossed over on Wednesday, only five were fuel tankers.

“Indian officials want to send the trucks carrying fruits, vegetables, and other food items,” he said. “We need fuel at this moment, not vegetable and fruits.”

With oil and gasoline supplies running low, Nepal has been forced to restrict traffic movement—allowing cars on the road on alternate days based on the last digit of their license plates. On Thursday, all sales of gasoline for use in private vehicles.

The massive earthquakes in April that killed more than 8,000 and left hundreds of thousands homeless, also blocked trade routes with China. Nepal now has few options but to wait.

Bitter memories linger from 1989, when India imposed a 15-month blockade after Nepal bought a batch of Chinese weapons.

Bitter memories linger from 1989, when India imposed a 15-month blockade after Nepal bought a batch of Chinese weapons.

“Is it not the responsibility of the security personnel of both countries not to let the border used by protesters? The protest is taking place at border points with Indian endorsement and it’s indeed a blockade enforced tactfully,” says Yubaraj Ghimire, editor of Annapurna Post, a leading newspaper from Kathmandu.

But some in India said New Delhi was going too far in strong-arming its neighbor, a nascent democracy that abolished monarchy only a decade ago.

“The best the rest of us could do is to apologize to the Nepalese for the atrocious behavior of our establishment and wish them all the best for a stable future,” opposition lawmaker Mani Shankar Aiyar wrote in an opinion article published this week on Indian broadcaster NDTV’s website.