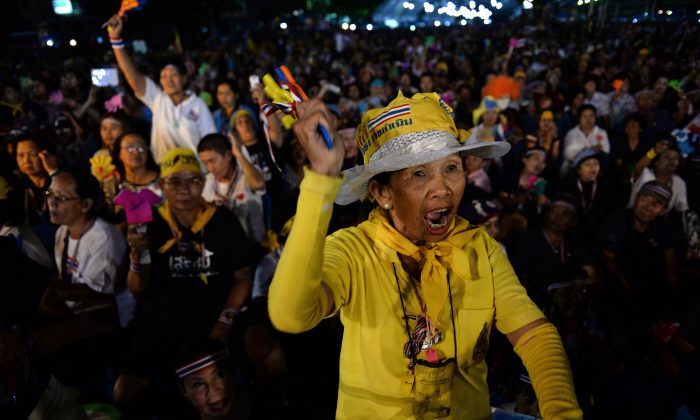 BANGKOK—Over a thousand anti-government protestors blew whistles and waved Thai national flags in the Silom district of Bangkok at midday on Monday to protest a political amnesty bill they say would allow former Prime Minister Thaksin Shinawatra to return to Thailand.

The turnout was down compared to three rallies held in the same area last week, but there were enough demonstrators to block three lanes of traffic. Several anti-government rallies on Monday, including the Silom group, joined a much larger sit-in organized by the opposition party, the Democrats, that has been ongoing at the Democracy Monument in the city’s historic district.

Various forms of protest have been continuing in Bangkok since the government of Yingluck Shinawatra passed the contentious bill in the early hours of Nov.1. The bill would grant amnesty to anyone involved in the political upheavals that have plagued the country since 2004.

The outcry against the bill is largely due to concerns from critics that it was created to allow the return of the Prime Minster ousted in 2006, Yingluck’s older brother, Thaksin Shinawatra. Thaksin has been living in self-imposed exile to avoid a conviction for abuse of power.

Due to the broad display of public displeasure, Prime Minster Yingluck backpedaled on the bill as it was debated in the Senate on Monday.

The Senate voted 141-0 late Monday to reject the bill after the ruling party withdrew its support. Yingluck has pledged that the bill will not be revived, although the more-powerful lower house can legally pass legislation without Senate approval after a 180-day wait.

The Democrat Party called for civil disobedience and a three-day nationwide strike beginning Wednesday. It’s not clear if the Senate vote will quell the government critics or if the Democrats are hoping to keep up a campaign to bring down the Yingluck government.

The Bangkok Post reported a leading Democrat Member of Parliament at the Democracy Monument telling anti-government supporters to begin a campaign of civil disobedience against the “Thaksin regime.”

While Thaksin Shinawatra might not be physically in Thailand, the current political turmoil affecting the kingdom is centered around him and his political legacy. Thaksin is a business tycoon who was Prime Minister from 2001 until his government was booted out in 2006 in Thailand’s 18th successful military coup.

Thaksin has been accused by his critics of being corrupt and for being the patron behind the red shirt anti-establishment movement that occupied a large section of Bangkok’s commercial area in 2010 for over a month. Over 90 people were killed in related street violence, which ended with red shirts setting fire to numerous commercial buildings and the Thai military forcefully clearing the red shirts from their barricaded camp.

Just over a year after the deadly red shirt protests, a pro-Thaksin party known as Pheu Thai, led by his younger sister Yingluck, was voted into power thanks to strong support from the North and Northeast of Thailand, which are considered red shirt strongholds.

On Sunday, 50,000 red shirt followers held their own rally in Bangkok to support the Pheu Thai government. Local newspapers on Monday ran alarmist headlines about how the presence of the two opposing protest groups in the city increases the risk of political violence.

The government also faced pressure on Monday in relation to an International Court of Justice (ICJ) ruling that the contested area around a 11th century temple on the Thai-Cambodian border is Cambodian territory and that the Thai military must withdrawal from the area.

The ICJ verdict over the Preah Vihear Temple is expected to create more protests from nationalistic groups against the Yingluck government, which enjoys good relations with Cambodia. When the two countries’ armed forces clashed over the temple, during the first half of 2011, the Thai government was led by the Democrat Party.