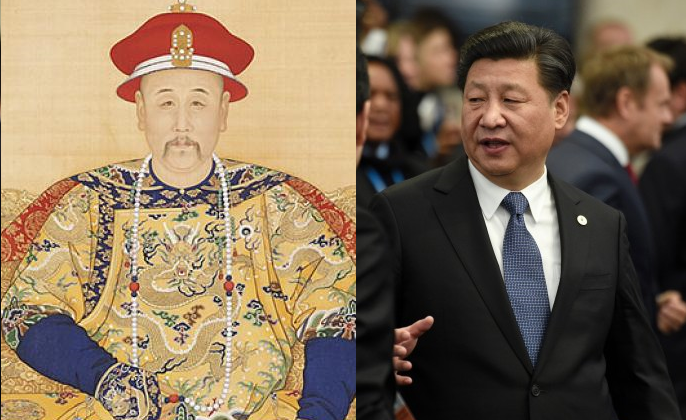 In the early 18th century, imperial China, then ruled by Emperor Yongzheng of the Qing Dynasty, faced a dilemma: less than a century after Manchurian invaders had broken through the Great Wall and established their dominion over the Middle Kingdom, pervasive corruption in the Qing bureaucracy threatened to bring it all to an inglorious end.

It’s a familiar struggle, and one that the Chinese Communist Party—more specifically, an official serving with its internal disciplinary authority—recently brought out to buttress its own long-term attempts at cleaning up such ills as embezzlement, bribery, and nepotism.

An article published May 28 on an official WeChat social media account belonging to the overseas edition of the state-run People’s Daily and distributed through multiple Chinese internet platforms, praised Emperor Yongzheng, who ruled China from 1722 to 1735, for being both strict and personable. The text credits him as an enlightened ruler who breathed fresh life into the Qing administration and inspired his subordinates, steeped in “the dregs of feudalism” and seeking endless promotions and riches, to “smelt themselves into pure gold.”

The article, written by Xi Hua of the Central Commission for Discipline Inspection (CCDI), as the Party’s anti-corruption agency is called, seems to be a thinly-veiled analogical rally cry for Party officials to accept and enthusiastically support the leadership and directives of General Secretary Xi Jinping.

“The idea suddenly occurred to me,” Xi Hua mused, “If I were to travel back in time 300 years to be one of Yongzheng’s subordinates, what kind of choices would I make?”

According to Xi Hua (no relation of Xi Jinping), Yongzheng’s unique style of politics was characterized by his simultaneous broad tolerance and strict direction when dealing with underlings.

On the one hand, Xi described how the emperor “struck hard and maintained constant pressure on corrupt, opportunistic, and lazy officials, as well as those who spent their days toadying.”

The Yongzheng emperor shown in western garb hunts a tiger From Album of the Yongzheng Emperor in Costumes, by anonymous court artists, Yongzheng period (1723—35). (Wikimedia Commonms)

On the other side of the coin, Yongzheng always showed a “pleasant and radiant face” to his loyal, honest, and upright men.

But even as the emperor maintained brief but personal correspondences with his ministers, as well as taking measures to accommodate their individual circumstances, he kept a strongman’s frame. To demonstrate this, Xi brought out the example of Sun Guoxi, the minister charged with governing Taiwan.

When Yongzheng discovered that the Taiwan assignment would force Sun to leave his aged mother in mainland China, he promptly reassigned him to govern the province of Fujian, which lay right across the strait.

But several years later, when Sun sought to parlay his good graces with the emperor into an honorary title for his mother, who was turning 80, Yongzheng rebuked him harshly and threatened an investigation: “Your elderly mother is about to be implicated by your wrongdoing!”

This is not the first time that Xi Hua has used the past to serve the present. His most well-known piece of writing drew on a choice character from the Qing Dynasty to highlight a contemporary political villain, attracting a round of media attention in China and the West.

In February 2015, Xi penned a lengthy criticism of Prince Qing, a noble known for his massive corruption at the end of the Qing Dynasty in the late 19th and early 20th centuries. In a political environment where oblique barbs, not direct thrusts, are common, the debauched prince was widely interpreted as an analogy for Zeng Qinghong, a retired Communist Party official who, along with his ally and former Party head Jiang Zemin, both maintained massive webs of influence long after they stepped down from their posts in the 2000s. Zeng has been Jiang Zemin’s political mastermind for decades, orchestrating Machiavellian takedowns of rivals in the Party while raising up loyalists.

The “qing” in “Zeng Qinghong” is the same Chinese character used in the Manchurian prince’s name.

Since General Secretary Xi Jinping took power in 2013, the CCDI has detained and investigated tens of thousands of Chinese officials, including scores of top-ranking Communist Party cadres, known as “big tigers” for their corruption. Political analysts believe that at the crux of the campaign is a factional rivalry between Xi and supporters of the former Chinese leader Jiang Zemin.

Xi Jinping is shown drawing a bow, in a photograph published by an account on Sina Weibo. (Weibo.com)

According to Xi Hua’s analysis, the Yongzheng emperor’s feats formed an important bridge in the combined 140-year reign of him, his father Kangxi, and his heir, Qianlong.

“Under [Yongzheng’s] government,” Xi wrote, “all officials were honest and upright.” At the time, China accounted for nearly one third of the world’s GDP.

In the article is some indication that the Party leadership may be planning greater shifts in the future. Xia Ming, a professor of politics at the City College of New York, said that General Secretary Xi Jinping may intend to bring about greater changes to the existing form of Chinese government and take steps towards a more presidential system.

“This was a unique age that saw changes occurring on a global scale. The old was being cast out and the new being established. It was also a time when great waves sifted the sands,” Xi Hua wrote of Yongzheng’s rule, using a Chinese metaphor indicating the act of refining or weeding out. “Everyone is confronted with taking a stand.”

Xi vaguely elaborated this last point, saying that “thought determines action, and the [political] structure determines the resulting [events.]” To choose to go with the leadership, Xi said, would mean being “smelted into shining gold and finding more value in life,” while those counteracting it would become “insignificant ashes, dashed into nothingness by the great waves of the era. There is no third option.”