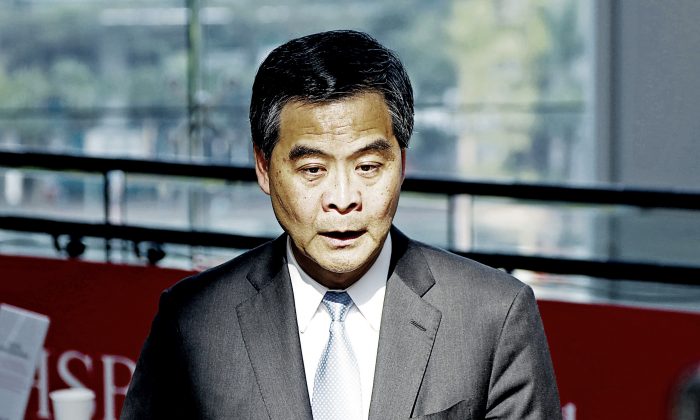 After the Chinese central government decided to send its anti-corruption watchdog to inspect the Hong Kong and Macau Affairs Office (HKMAO), 3 weeks ago (June 22, 201), it was disclosed that the watchdog team and HKMAO received hundreds of complaints every day. Many of these were against Hong Kong Chief Executive Leung Chun-ying.

An inside source told Epoch Times that a lot of the complaints criticized Leung Chun-ying for adopting gangster-style measures to destroy the “one country, two systems” policy in Hong Kong, and they asked the inspection team and Xi Jinping’s authorities to make further investigations.

Since Xi took office, China’s top anti-corruption watchdog – the Central Commission for Discipline Inspection ─ has conducted 10 rounds of inspections in 3 years, involving 213 organizations and covering 31 provinces, as well as state-owned enterprises and central financial institutions. This is the first time they have included the HKMAO and its liaison offices in Hong Kong and Macau.

The source also noticed that some of the complaints referred to 2 incidents, both related to the Hong Kong Youth Care Association (HKYCA). One is the disrupting of a classical Chinese dance competition in 2012, and the other is a bomb scare incident that interfered with a Falun Gong conference earlier this year.

According to the competition organizer, hundreds of members of the HKYCA, gathered outside the venue, to create chaos.

Around 9am, over 30 HKYCA members in uniforms pulled out defamatory banners and posters and yelled at full blast. Some attempted to disrupt the entry of the competition judges.

After the competition started, more HKYCA members gathered outside. The number soon grew to hundreds.

During the confusion, a police officer was hit and verbally abused by HKYCA members.

Venue staff told the competition organizer that they saw someone distributing money to the HKYCA members outside the venue. It was revealed that their daily pay was HK$300.

According to several sources, the HKYCA’s mastermind is the Central Political and Legal Affairs Commission, a Gestapo-like organization, previously led by former security czar Zhou Yongkang, who has recently been sentenced to life imprisonment. Its backstage commander in Hong Kong is Leung Chun-ying, who is also known to be an underground Chinese communist party (CCP) member.

On Jan 17 this year, Hong Kong Falun Gong practitioners gathered at the BP International Hotel in Kowloon for an experience sharing conference.

According to en.Minghui.org, in this type of conference, practitioners typically discuss how they are improving themselves by following the practice’s principles of truthfulness, compassion, and tolerance.

From early morning that day, a large number of HKYCA members caused chaos outside the hotel.

At about midday, someone telephoned the police to say that a bomb had been placed in the conference venue. The police ordered an urgent evacuation of the hotel, including hotel guests: the conference was interrupted and later cancelled.

The police said they found a suspicious package containing gas canisters and electronic timers in the men’s restroom on the first floor. However, the device was not a bomb or anything similar. The police kept the hotel on lock-down for over 5 hours.

The Hong Kong Falun Dafa Association condemned the act of intimidation and questioned the police’s unreasonable lock-down, which forced the conference to be cancelled. Some LegCo members condemned the CCP’s threats.

On Feb 24, 2016 Hong Kong police announced the arrest of 2 male and 3 female suspects involved in the Jan 17 bomb threat. The suspects have triad backgrounds.

Epoch Times obtained information from a China source that the mastermind behind the bomb scare was Zhang Yue, former secretary of the Political and Legal Affairs Commission of Hebei Province. Zhang was endorsed directly by Zhou Yongkang.

Zhang was dismissed from his position in April this year (2016) a few months after the bomb incident.

According to Companies Registry records, HKYCA was set up on June 8, 2012, a few weeks before Leung Chun-ying took over as Chief Executive. Ever since then the HKYCA has launched attacks on the meditation discipline Falun Gong, one after another.