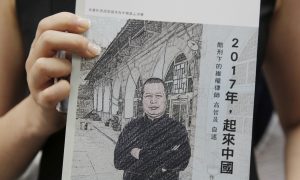 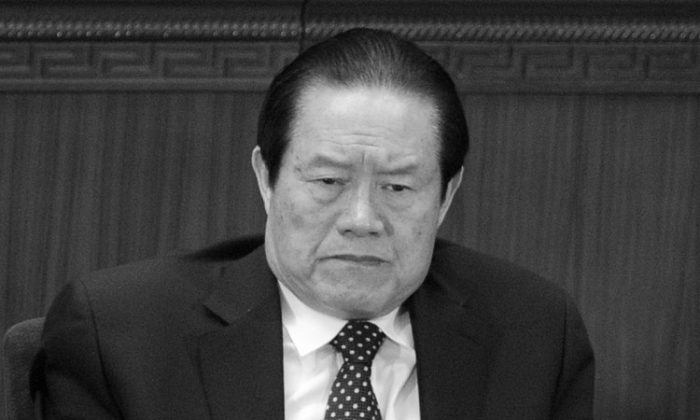 Zhou Yongkang, the former security czar. Many officials in the security apparatus have recently been secretly arrested, according to sources.  (Liu Jin/AFP/Getty Images)
Chinese Regime in Crisis

Hundreds of officials from the powerful Communist Party organ that controls almost all aspects of domestic security have been secretly arrested in Party leader Xi Jinping’s anti-corruption sweep, New Epoch Weekly has learned from a highly placed official in Beijing. The ultimate goals of this purge are the arrest of former security czar Zhou Yongkang and the dismemberment of the organization he headed.

According to the source, a former senior official of the Political and Legal Affairs Committee (PLAC) recently delivered copies of a report to former party heads Hu Jintao and Jiang Zemin, informing them of mass arrests within the PLAC during the past three months.

The report stated that 453 PLAC officials from all levels have been detained for interrogation, including 392 from the Public Security Bureau, 19 from the Procuratorate, 27 from the court system, and 10 from nonpublic security bureaus. In addition, it said that 12 high-level officials had committed suicide.

The source, who is close to Hu Jintao’s office, said the report was meant to attract the attention of Jiang Zemin and Hu Jintao in the hope that they would step in and send a warning to Xi Jinping and Wang Qishan, who heads Xi’s anti-corruption effort.

Hu Jintao has not made his position known on this matter, the insider said, but he ventured to say that Hu was not likely going to interfere with the policies of the new Party leaders.

Since taking over as head of the Party, Xi Jinping has repeatedly talked about reform and the need to root out corruption in the Party, in particular speaking of the need to target both “flies” and “tigers.” Though a few arrests have been made publicly, they seemed scattered and unable to accomplish anything substantial. However, the large-scale secret arrests of PLAC officials suggest that Xi has chosen the PLAC as his specific target.

The Beijing source said that many observers believe that this is a purge of the PLAC by the new leadership. Many public security police and cadres are unsure of the spirit of the anti-corruption drive, and the arrests have caused a huge shock inside the PLAC and the “stability maintenance” system, the source said.

The observations by the Beijing source are in line with the memo sent to Hu Jintao and Jiang Zemin, which reported that PLAC operations are in a semi-paralyzed state, with the morale being low, and a pessimistic mood permeating many offices.

The source in Beijing said the detention and interrogation of so many corrupt PLAC officials was laying the groundwork for the future arrest of “key figures.” The biggest of these is the former PLAC head Zhou Yongkang.

Zhou retired at the 18th Party Congress in November from the Politburo Standing Committee and as head of the PLAC, which he had run since 2007.

Zhou has been at odds with Hu Jintao and former Premier Wen Jiabao and was a mentor to ousted Politburo member Bo Xilai, who is now awaiting trial. The Epoch Times has reported that Zhou was grooming Bo as his replacement in the Standing Committee. In addition, Zhou and Bo had planned a coup, intending to remove Xi Jinping once he took power.

Last week, Beijing human rights lawyer Pu Zhiqiang publicly denounced Zhou Yongkang on his Weibo accounts, calling him a “poison” of society and a “traitor of the people” who “has brought huge disasters to the country.”

Pu told Voice of America (VOA) that Zhou’s approach to “stability maintenance” is the major cause of China’s social instability. “None of the social conflicts in China were truly resolved,” which include incidents such as the June 4th Tiananmen Square massacre, the Falun Gong persecution, forced demolitions, and environmental destruction, Pu said.

Current affairs commentator Jin Zhentao told The Epoch Times for an earlier report that the fact that Pu didn’t quickly suffer violent retaliation indicates that Zhou Yongkang is not in favor with new leader Xi Jinping. Zhou will likely “be the next to be hunted down,” after Bo Xilai is put on trial, Jin said.

The Beijing source told the New Epoch Weekly that the PLAC is an obstacle to Xi’s rule. Removing that obstacle is not easy. Behind the main PLAC officials are those in local areas with financial ties to the security apparatus and some ministries, as well as some of the most powerful men within the Party, the Beijing source said.

The hundreds of recent arrests and subsequent interrogations may be meant to give Xi the information he needs to justify taking down one of the Party’s big tigers.

Translated by Irene Luo. Written in English by Gisela Sommer and Stephen Gregory. Research by Ariel Tian and Jane Lin.

[topic]Click www.ept.ms/ccp-crisis to read about the most recent developments in the ongoing crisis within the Chinese communist regime. In this special topic, we provide readers with the necessary context to understand the situation. Get the RSS feed. Who are the Major Players?