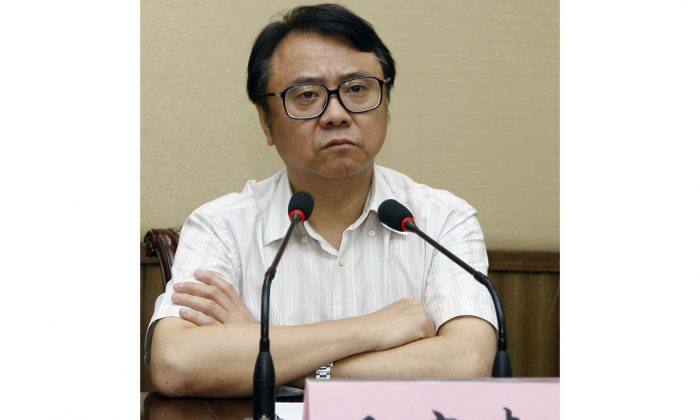 Wang Zongnan of Shanghai Bright Food attending a meeting in Shanghai on July 30, 2012. Wang is one of many executives under investigation for corruption in China. (STR/AFP/Getty Images)
China

When China’s new Communist Party chief announced his intention to rid the Party of corruption shortly after taking office, no one expected the massive scope of the operation. Now even state-owned enterprise (SOE) executives are being purged wholesale.

Especially since the 18th National Congress of 2012, Xi Jinping’s anti-corruption forces have stepped up investigations of SOE executives across all industries.

According to a report by Securities Daily, as of Aug. 12, over 20 current or former corporate executives of SOEs have been investigated this year.

Some of them have been placed under “shuanggui,” or “double-designation,” a disciplinary measure outside the regular legal system under which party members are detained and interrogated and often tortured to force confessions. Four of the 20 reportedly committed suicide.

The executives work for SOEs ranging from China Railway Group Ltd. to China Mobile Communications Corp. These are the most important people currently under investigation.

Wang is accused of embezzling company funds and accepting bribes while working for Friendship (Group) Co., Ltd. and Lianhua Supermarket Co., Ltd. The Second Branch of the Shanghai Municipal People’s Procuratorate initiated an investigation against him on July 28.

On Jan. 16, Chengdu GoldTel Electronical Technology Co. issued a statement saying that after six months of investigation by security agencies, the Procuratorate has approved the arrest of the company’s controlling shareholder He Yan on charges of misappropriation of company funds.

As early as July 18, 2013, Chengdu GoldTel Electronical Technology Co. had publicized that He Yan was under the investigation by the public security agency of Yichang City, Hubei Province, for her personal illegal business practices.

In less than one month, on May 16, the CCDI made another announcement on its website, saying that Wang Shuaiting, the deputy board director, general manager, and deputy party chief of China National Travel Service (HK) Group Corp. had been taken away for investigation. It cited Wang’s connection to Song Lin’s case when Wang worked at China Resources Holdings Co.

On May 19, China Vanke Company Limited announced that the company’s supervision board accepted the resignation of its member Wu Ding. Wu quit his job because of personal reasons. However, Wu also has another title. As the CEO of China Resources Financial Holdings Co. Ltd., there have been speculations not long ago about Wu being placed under investigation for “severe violation of regulations and breach of law.”

China National Petroleum Corp. (CNPC) announced on the evening of May 16 that the company’s deputy general manager, Bo Qiliang, had been transferred to another position that started April 26. According to media reports, not long ago Bo was taken away for investigation. In January 2010 he was promoted to the deputy general manager position and was responsible for the overseas business of CNPC.

Xu Long, Board Director and General Manager of China Mobile

On Jan. 15, th Guangdong Provincial Discipline Inspection Committee opened a case against Xu Long, former board director and general manager of China Mobile Communications Corp., Guangdong branch. The Guangdong Provincial Party Standing Committee approved the expultion of Xu from the Communist Party, and confiscated all his income from regulation violations, and transferred him to the legal department for further investigation.

The threat of being investigated even drove some executives to commit suicide.

According to the Police Department of Tongling, Tongling Nonferrous Metals Group chairman, Wei Jianghong, jumped from a building and died on June 25.

According to a police department investigation at the scene, a video document, an investigation of related people, and detailed analysis of all the evidence, police came to the conclusion that Wei Jianghong jumped from the building because of the high pressure from work, chronic sleeplessness, and stress.

On May 18, board chairman Liu Zhanbin, of Sanjing Pharmaceutical Co Ltd, jumped from a restroom window in a hospital and died. He was going to be investigated by Heilongjiang Province Procuratorate’s Office.

He went to the hospital with the excuse of not feeling well but later committed suicide. Later, Sanjing Pharmaceutical confirmed that he died by jumping from a building and he did it because of the pending investigation.

This past January, China Railway Group Limited announced that the company’s executive director and the president Bai Zhongren died on Jan. 4 due to an accident.

According to media reports, however, Bai Zhongren’s family members said he suffered from depression and committed suicide by jumping from the roof of his own home and later died at the hospital.