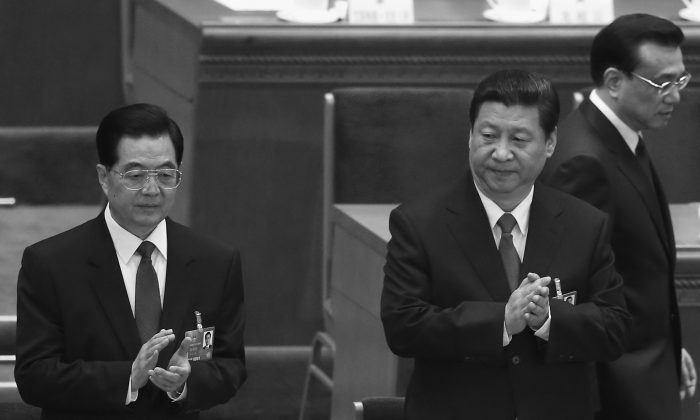 Chinese premier Li Keqiang (R) walks past former Party chief Hu Jintao (L) and the newly-elected leader Xi Jinping (C) at the closing session of the National People's Congress (NPC) in Beijing on March 17, 2013. Xi and Li are among the top officials being asked to disclose their assets as part of a new anti-corruption petition. (Feng Li/Getty Images)
China

Eight activists have been detained in the past few weeks for calling on over 200 high-level officials in the Communist Party to make public details of their assets, alongside new leader Xi Jinping’s anti-corruption campaign.

Most recently, rights lawyer Ding Jiaxi and veteran democracy activist Zhao Changqing were locked up on April 17, two days before Xi’s latest speech about countering corruption at a Politburo meeting on Friday.

“All Party members must keep high mental vigilance and gain more public trust for the Party by new progress in the anti-corruption struggle,” Xi said, according to state mouthpiece Xinhua.

Also on Friday, state-run media created special webpages that lead to online informant centers where the public can report on corrupt officials.

The CHRD report added that the seized activists are part of “The New Citizens Movement,” and their petition for asset disclosure includes Xi Jinping and new premier Li Keqiang.

Lawyer and activist Liu Weiguo told New Tang Dynasty Television that Ding Jiaxi was completely within his rights to make the request for transparency. “If the human rights of a lawyer can’t be protected, then the basic rights of citizens will be trampled by the authorities.”

“If they are afraid of their assets being publicized, it shows that there’s some issue with their property,” Liu continued. “They possess huge amounts of undisclosed wealth. Officials fear that this evil will be exposed, so they stifle citizens who ask for disclosure.”

Ai Xiaoming, former professor of Sun Yat-Sen University, told Voice of America that Ding’s appeal is in line with the Party’s anti-corruption campaign. “So if you say asking officials to disclose their wealth is illegal, you are actually saying that the anti-corruption requirement raised by the Party is illegal.”

Prominent lawyer Zhou Ze blogged about the crackdown on his Weibo account: “It will be very difficult to systematize official asset disclosures,” he said. “Citizens who call for officials to disclose their assets get punished. The chasm between ordinary people, and the Communist Party and its officials is vast.”