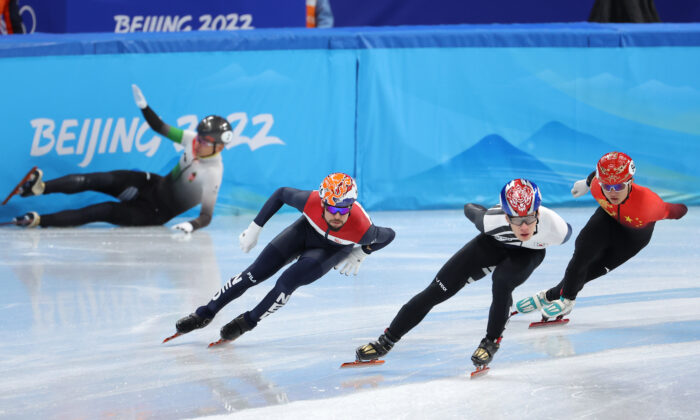 Jessica Mao
Jessica Mao is a writer for The Epoch Times with a focus on China-related topics. She began writing for the Chinese-language edition in 2009.
View profile
Follow
and Lisa Bian

Disputes at the Beijing Winter Olympics, from women wearing Hanbok at the opening ceremony to a controversial penalty in short track speed skating have sharply inflamed anti-Chinese Communist Party (CCP) sentiment in South Korea. This could influence how people vote in South Korea’s presidential election in March.

At the Opening ceremony of the Beijing Winter Olympics on Feb. 4, a Korean-Chinese woman was dressed in Hanbok—South Korea’s national dress—as a representative of China’s ethnic minority, which has drawn strong criticism from South Koreans, including their politicians. The critics have said the move was tantamount to Beijing claiming Hanbok as Chinese culture, and that China appropriates South Korea’s traditional culture.

Hwang Hee, South Korea’s Minister of Culture, Sports and Tourism, said on Feb. 5 that China’s move was likely intended to show that ethnic Koreans are a minority in China, and that it may cause misunderstanding between the two countries, which is regrettable.

On Feb. 6, South Korea’s National Assembly Speaker Park Byeong-seug said that Hanbok is the most representative culture of South Korea, and urged both nations to respect each other’s inherent culture.

Both the ruling and opposition parties in South Korea criticized the move by Beijing as a “rude act” that “belittles South Korea.”

Fairness of Referees in Question

In the short-track speed skating men’s 1,000-meter race on the evening of Feb. 7, Korean athletes Hwang Dae-heon and Lee Jun-seo had their results canceled in the semi-finals.

Instead, two Chinese players advanced to the finals. In that race, Hungarian Liu Shaolin Sándor, who crossed the finish line first, was also disqualified for foul play, leaving the two Chinese athletes to win gold and silver.

Yoon Hong-geun, president of the Korean Ice Sports Federation and head of the Korean delegation to the Winter Olympics, said that he would look for every possible way to take the case to the Court of Arbitration for Sport (CAS).

The delegation said that Hwang and Lee did not have any contact with their opponents. Choi Yong Koo, head of the Korean short track speed skating team’s support team and an international judge for the sport, said that Hwang adopted the tactic of passing on the inside. There was enough space in front of him on the turn and he naturally took the line and took the lead without any contact. The judges seemed to have misread the Chinese athlete’s hand signals.

The International Skating Federation (ISU) had strengthened its rules regarding contact and blocking in passing situations, placing more responsibility on skaters who pass. The rule change saw overtaking being penalized in ambiguous cases and cancellations of scores were frequent in this season’s World Cup.

However, South Korean media and the public have expressed their dissatisfaction and strongly questioned the fairness of the Olympic referees, and accused them of favoring China.

South Korean presidential candidates have also spoken out on the results. Presidential nominee for the ruling Democratic Party of Korea, Lee Jae-myung, wrote on Facebook that he was disappointed and angry over the biased judgment of short track speed skating in Beijing, while Yoon Seok-youl, candidate of the People Power Party, told reporters that he sympathized with the anger and frustration of the athletes and would like to send them his consolation.

Kim Jae-hee, president of the Korean Veterans Association, told The Epoch Times that the strong response over Hanbok didn’t happen overnight. “China (the CCP) has always regarded Korea as a subsidiary country, so Koreans have always felt disrespected. When they encountered such things [as in the Opening Ceremony], they become emotional.”

Kim said he personally believes the presence of ethnic Koreans at the Olympics wasn’t what Koreans were unhappy about—it’s the CCP’s distortion of history that has them outraged.

On the allegations of unfair referees, Kim said, “The Olympic spirit must have the norms of integrity and commitment. The CCP has violated this spirit, which hurt the feelings of Koreans.

“The CCP is deeply rooted in China and leads that society. In many ways, there is no respect for basic humanity. I think China has become a dark country in many ways,” he said.

Kim So-young, a 39-year-old researcher at a Korean museum, told The Epoch Times that the Hanbok controversy is “a show by the CCP to belittle Korea’s history and culture” and the incidents with the referees “a joke by the CCP in the name of the country.” She asked, “Doesn’t [the CCP] feel ashamed in the face of the sweat of integrity shed by the athletes from around the world?”

Recent surveys suggest that anti-CCP sentiment in South Korea may impact on national politics and could directly influence cotes in the presidential election next month.

According to the report by Walter H. Shorenestein APARC, an overwhelming majority—78 percent—of respondents said that on domestic and international issues, Korea-China relations would be an important factor in deciding which presidential candidate to vote for. Among respondents in their 20s, 82 percent indicated that “Korea-China relations will be an important voting issue.”

On Feb. 9, South Korean newspaper Joongang Ilbo said the controversy over favoritism at the Beijing Winter Olympics has unleashed anti-CCP sentiment among young Koreans. This generation is extremely sensitive to issues of “justice,” and many conclude from their own experiences in daily life that “China [the CCP] uses unfair methods.”

A team of researchers led by Shin Gi-wook, director of the Walter H. Shorenstein Asia-Pacific Research Center (Walter H. Shorenestein APARC) at Stanford University, said in a Feb. 8 report that their survey of over 1,000 South Koreans before the Beijing Winter Olympics showed that on a scale of 0 to 100, South Koreans’ favorable opinion of China was only 26.5 points, far lower than the 69.1 points from Americans and even lower than the 30.7 points from the Japanese.

A survey released in January by the Seoul National University Asia Center also showed that South Koreans trust China the least among 20 countries, including the United States, China, and Japan, with only 6.8 percent of respondents ranking China as trustworthy.