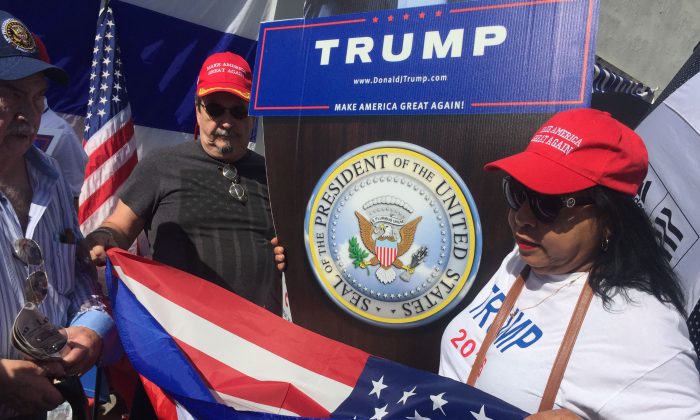 Around 100 Cubans gather in Little Havana, around the historic Cafe Versailles, to watch the inauguration streamed in a big LCD TV installed over a pick up truck in the street in Miami, Florida on Jan. 20, 2017. (LEILA MACOR/AFP/Getty Images)
US

MIAMI—Cuban-American lawmakers from Florida helped shape U.S. relations with the island for years until they found themselves on the outside during a historic thaw in relations.

But they could be getting the upper hand on Cuba policy again under President Donald Trump with a possible return to an earlier, more hard-line U.S. stance toward relations with Cuba’s government.

“We have had more conversations with high-level Trump officials than we had in eight years of the Obama administration,” said Rep. Mario Diaz-Balart, one of a handful of Republican members of Congress from Florida who long had an outsized role on U.S. foreign policy related to Cuba.

What Diaz-Balart and other Cuban-American lawmakers hope is that their renewed access to the U.S. government under Trump’s leadership will help them reverse the steps taken by former President Barack Obama and President Raul Castro to “normalize” relations between the two countries.

“Everything is going to be very different,” predicted Rep. Carlos Curbelo, another Miami-area Republican who said he felt shut out under Obama.

The congressional delegation from South Florida, home to the largest number of Cuban-Americans in the nation, was long able to help craft U.S. policy toward the island. They had hoped to continue isolating Castro’s regime and both Democrat and Republican politicians went along, at least in part.

Diaz-Balart recalled that under President George W. Bush he and other Cuban-Americans convinced the administration to grant travel visas and asylum to Cuban doctors working overseas.

“When something came up, we could call and they responded to us immediately,” he said.

But that changed under Obama, who Diaz-Balart said refused to meet with him, as the administration used executive orders to lift some restrictions on travel, trade, and investment and ended the so-called “wet-foot, dry foot” policy that allowed Cubans to stay and apply for legal residency if they reached U.S. soil.

Diaz-Balart and other Cuban-American lawmakers want U.S. policy to return to where things were before December 2014, citing what he says is the Castro government’s “brutal oppression.” Curbelo agrees about the return to earlier policies but does not oppose the easing of restrictions on travel that allow Cuban-Americans to more easily visit family back home.

Rep. Ileana Ros-Lehtinen, another Florida delegation member, declined to speak to The Associated Press but recently forwarded a letter to the Trump administration calling for a policy focused on “freedom, democracy, the rule of law and respect for human rights” that enforces sanctions written into U.S. law. Sen. Marco Rubio, who also declined an interview request, has criticized what he calls Obama’s “failed Cuba policy,” and recently said he expected Trump would reverse the previous administration’s order halting the asylum program for doctors.

During the presidential campaign, Trump was critical of the United States opening up to the Castro government and said Obama wasn’t paying enough attention to human rights on the island. He promised to re-evaluate the agreements with Cuba and cancel those he doesn’t believe serve U.S. interests. He named several anti-Castro Cuban-Americans to his transition team, but has not yet said publicly whether he intends to reverse specific policies of his predecessor.

Some supporters of the opening with Cuba see reason for optimism. James Williams, head of Engage Cuba, a corporate-backed bipartisan group that supports improving ties to the island, said Trump may not want to reverse what he sees as the “positive progress” of the last three years.

“We have seen more positive progress in Cuba over the last two years than the last 55 years combined,” said Williams, adding that a thorough review of current policy should show the Trump administration the advantages of moving toward thawing relations.

Détente No Help to Cubans

Diaz-Balart and Curbelo said the meetings they and others have had with officials from the new administration, as well as Secretary of State Rex Tillerson’s confirmation hearings, have given them hope that Obama’s executive orders restoring relations with the communist regime would be reversed. “Without a doubt, the days of those orders are numbered,” Diaz-Balart said.

Even though Ros-Lehtinen and Curbelo did not endorse Trump, some believe they, like Diaz-Balart and Curbelo, will have significant influence on the new administration.

“They are going to be the guides of the policy toward Cuba,” said Sebastian Arcos, associate director of the Cuban Research Institute at Florida International University.

Frank Mora, who was deputy assistant secretary of defense for the Western Hemisphere under Obama, agreed: “Trump is going to go back to handing the foreign policy of the U.S. toward Cuba to the Cuban-American legislators.”