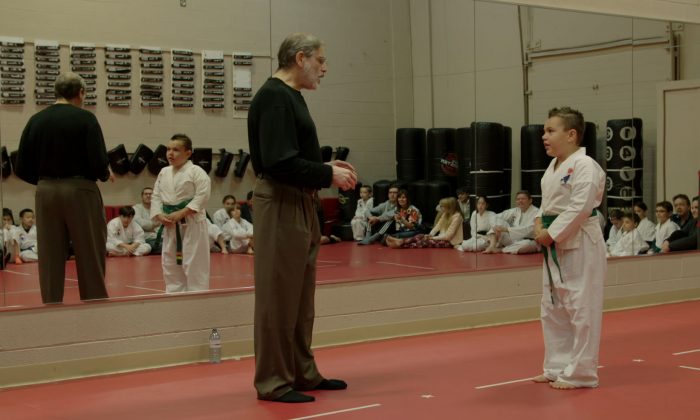 With bullying remaining rampant, is a new approach needed?
By Justina Reichel

From the time Michigan teen Isaac was seven years old he was the frequent target of bullies. It was mostly the name-calling, singled-out-in-a-crowd type of bullying that didn’t hurt physically but left him with the same sickening fear in his gut every morning on the way to school.
The hardest part was not knowing what kind of humiliation would be in store that day—he always had to be on red alert.

After years of unsuccessful attempts to stop the harassment, Isaac’s mom Michelle (last names of both interviewees omitted to protect their identity) started to question her son: Why was he being bullied? Was there something that he was doing that attracted bullies? Why was it so consistent no matter how many different schools he went to?

“Someone can’t always be mean to you everywhere you go,” she told Isaac one day. “We need to get you skilled so you know how to deal with people, other kids.”

As luck would have it, Michelle attended a talk by psychologist and anti-bullying expert Israel (Izzy) Kalman at her women’s group soon after. She hired him on the spot.

Kalman’s strategy to combat bullying is virtually the opposite of all mainstream anti-bullying programs that swept through schools in the wake of the 1999 Columbine high school massacre—and countless heartbreaking headlines since.

The problem is that aside from some success in the Nordic countries, the program has largely failed in North America. Success rates were at best a 12 percent reduction in the number of students who said they are bullied twice or more per month, according to the largest study of the Olweus method to date, done by the Highmark Foundation. At worst, in some schools, bullying increased after adopting the program.

But Kalman takes a different approach—one that leaves schools and parents largely out of the picture—and it has had an estimated 90 percent success rate in reducing bullying, he says. He teaches bullying victims how to empower themselves to overcome the situation by following The Golden Rule: Love your neighbour as yourself; do unto others as you would have them do unto you (even if the other is not being very nice).

Kalman’s message boils down to this: be nice to your bully and treat him or her as a friend, try not to react in anger, and work to defuse the conflict. Through role-playing, Kalman teaches kids how to remain calm when they’re being bullied and what they should say to de-escalate the situation. The idea is to stop feeding the bully’s drive to dominate and “win.”

Here’s a typical back-and-forth he might act out with a client:

Scenario 1 – Victim gets mad and defends himself

Bully: Hey fatso, how did you get so huge? Do you eat ice cream for breakfast?
Victim: (Gets angry and defensive) No, I’m not fat! Don’t say that to me!

Bully: Why don’t you stop eating?
Victim: I don’t even eat lots! You’d better stop calling me names or I’m going to tell the teacher on you!

Bully: Oh yeah? We’ll see about that. You tell and I’ll break your face (threatens to hit the victim, conflict escalates).

Bully: Hey fatso, how did you get so huge? Do you eat ice cream for breakfast?
Victim: (Staying calm) I don’t know, it’s been really hard for me. I don’t know what I’m doing wrong.

Bully: Why don’t you stop eating?
Victim: I try to watch what I eat but nothing seems to work. I don’t know why I keep gaining weight. How do you stay skinny?

Bully: Mumbles an insult and walks away.

When Kalman began to work with Isaac, re-playing the typical scenarios he faced, Isaac was skeptical at first, but desperate enough to try anything. So one day, as the same kid cornered him with the same old insults, he gathered up his courage … and didn’t react.

“[The bully] was just saying bad things about me … so I just said, ‘OK, that’s fine,'” Isaac recalls.

The bully tried harder, as Kalman told Isaac he would, testing to see if he could ruffle the boy’s feathers. But Isaac refused to submit to anger, and kept agreeing with the bully or simply stayed quiet. After a short time, the bully, bored and frustrated that Isaac wouldn’t play the game, stopped and walked away.

“I felt good. I felt happy,” Isaac says. “Because I didn’t let him bother me–then it just gives you a sense of happiness.”

Although Isaac is one of Kalman’s many clients who testify to the program’s results, his technique is considered highly controversial by some. He has even been accused of outright child endangerment.

“Some of the most horrible stuff written on the Internet is about me. I’m the most bullied bully expert in the world,” he says, noting that the “anti-bullying activists” are some of his most venomous critics.

“They insult me, they write terrible things about me, and they have no idea that they’re engaging the very behaviour that they’re condemning.”

Amazon reviews of Kalman’s book, “Bullies2Buddies,” is a war-zone of comments that range from glowing 5-star reviews from parents and teachers to 1-star condemnations of Kalman as a hack who indulges in “victim-blaming.”

Kalman’s strategy to combat bullying is virtually the opposite of all mainstream anti-bullying programs.

One critic of Kalman, Ben Leichtling, psychotherapist and author of several books on how to stop bullying, says the technique might work for casual teasing, but not relentless bullying.

“Dr. Kalman doesn’t work with the targets of real-world school bullies. His advice is great for the targets of nice kids who are bullying one time because they’re having a bad day,” he wrote on his website BulliesBeGone.com.

“Real-world bullies are relentless predators who look for weak and isolated prey. You can’t stop real-world bullies by being nice, understanding, kind, and rational. … Real bullies don’t have the empathy to stop abusing you because your feelings are hurt or because you’re a caring little saint.”

What to Do When You Work With a Bully

Kalman says his approach is not meant to be used in cases of severe abuse or assault, which he defines as “crimes” that should not be put in the ever-widening category of bullying. But the vast majority of bullying falls into the less severe category, he says, and the real reason his method is often criticized is that it goes against the prevailing narrative that if someone is mistreating you, it’s never your fault.

“People love the anti-bully movement. They love what it teaches. You know how comforting it is to be told that your problems are not your fault in any way—nobody wants to give up that philosophy,” says Kalman, who will appear in the upcoming bullying documentary, “Do You Think I’m a Joke?”

Research published by the American Psychological Association shows that the kids most likely to suffer repeated bullying are those who do, in fact, have a lack of social problem-solving skills. In other words, they may be feeding the bully’s fire.

“A typical victim is likely to be aggressive, lack social skills, think negative thoughts, experience difficulties in solving social problems, come from a negative family, school, and community environment, and be noticeably rejected and isolated by peers,” says Clayton Cook, author of the study “Predictors of Bullying and Victimization in Childhood and Adolescence: A Meta-analytic Investigation.”

The broadening of the bullying definition—including everything from eye-rolling to murder—may also be part of the problem.

So when popular anti-bullying programs tell kids to always look outside for solutions—such as reporting the bullying to parents and teachers or asking an adult to intervene—it forces them to rely on others to solve their problems, which doesn’t address the fundamental issue, according to Kalman. Another reason this strategy often fails, he says, is that no one sees themselves as a bully and will always deny it if they are accused—making it very unlikely that they will see a need to change their ways.

The broadening of the bullying definition—including everything from eye-rolling to murder—may also be part of the problem, according to Sue Eva Porter, author of “Bully Nation: Why America’s Approach to Childhood Aggression is Bad for Everyone.”

In our desire to protect kids from emotional pain, we have expanded the definition to include almost any behaviour that has the potential to make a child feel bad, says Porter, and with the expanded definition, we expect kids to behave, and to learn from their behaviour, in ways that are often well beyond their developmental capabilities.

“I have come to believe that many of our responses to the current bullying “epidemic” are deeply flawed, regardless of our good intentions,” she writes. “In our desire to help kids feel safe, and fuelled by our fears about the startling bully statistics, we have developed methods of responding to childhood aggression that often do more harm than good.”