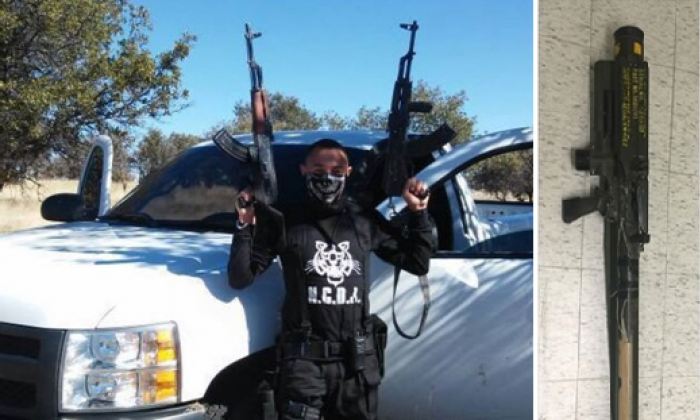 A member of a Mexican drug cartel poses with two kalashnikov rifles, and a photo of a captured Redeye MANPADS system are shown side-by-side. The images were recently released by the Mexican attorney general. (For Public Distribution/via Small Wars Journal)
Americas

A new weapon seized in a series of raids on the Mexican drug cartels in Nuevo Casas Grandes, Chihuahua, shows a concerning addition to the arsenals of the powerful gangs.

Between April 15 and April 19, agents of the Mexican attorney general carried out raids on the cartels, under what they called operation “For The Safety Of Casas Grande.” They seized drugs, a high-caliber sniper rifle, thousands of rounds of ammunition, 19 luxury vehicles, and five tigers.

But the main catch of the operation wasn’t the drugs or the exotic animals. The biggest find was a shoulder-fired anti-air missile launcher.

This marks the first time that visual proof has been released of a cartel getting its hands on a MANPADS system, according to Dr. Robert J. Bunker, adjunct research professor at the U.S. Army War College’s Strategic Studies Institute.

He said in an email interview that while the cartels have been increasingly getting hold of Rocket Propelled Grenades (RPGs), “MANPADS images have been virtually non-existent” in their arsenals.

Some of the cartels have also demonstrated their willingness to use such weapons. On May 1, 2015, members of the Cartel Jalisco Nueva Generación in Jalisco State, Mexico, fired RPGs at two Mexican military helicopters and one of them “crashed in flames.”

The MANPADS would “extend their air defense perimeter out a number of kilometers depending on the type of system acquired,” Bunker said, noting “I can readily envision them using these systems for Mexican federal and military anti-helicopter targeting—though of course not for civilian airliner attacks.”

Bunker said that while Mexican authorities would likely strike back hard against such an attack, their response likely wouldn’t be much stronger than if a cartel were to use an RPG or a .50 Cal sniper rifle (which are also powerful enough to shoot down helicopters).

“This has happened to some extent with RPG, fragmentation and launched grenade, and heavy sniper rifle use by the cartels,” he said. “They are pretty much viewed as almost common armaments now carried by their foot soldiers.”

Bunker noted in a report on Small Wars Journal that there were reports in May 2009 that a Soviet-era MANPADS launcher was seized in Playa Bagdad in Matamoros, Tamaulipas. He noted, however, that the launcher was not physically in possession of a cartel member, and a photo of the launcher was never released.

Bunker has kept track of Mexican cartel weapons seizures over the years, as well as social media posts from cartel members posing with their weapons. He said “MANPADS images have been virtually non-existent.”

He speculates that the recently-seized MANPADS system was originally sold by a foreign military decades ago, “and then ended up on the international black market.”