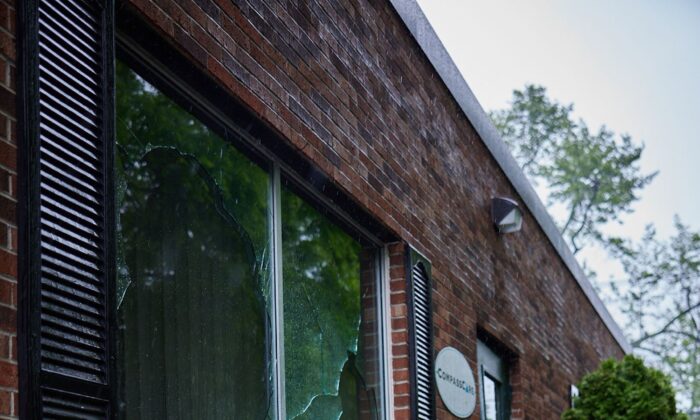 A CompassCare crisis pregnancy center outside Buffalo, N.Y. was firebombed and vandalized on June 7, 2022. (Photo courtesy of CompassCare)
US News

Facing violence in the real world and censorship in the virtual one, anti-abortion groups are asking state attorneys general to do more to keep them from being wiped off the map—Google map.

Tension over abortion rights began even before the Supreme Court’s Dobbs decision on June 23 overturning the 1973 Roe v. Wade opinion that had made abortion a constitutionally protected right for nearly half a century.

In an unprecedented move, a preliminary draft of the decision was leaked, and published by Politico on May 2. It led not just to demonstrations—including some outside Supreme Court justices’ homes—but to acts of violence and vandalism against pregnancy centers that support pregnant women to encourage them to carry their babies to term. An investigation into the leak continues, Justice Neil Gorsuch said recently, adding he hoped it was finished soon.

CompassCare, an upstate New York group whose Buffalo-area center was firebombed on June 7, said it had documented a sustained pro-abortion effort successfully pressuring tech giants Google and Yelp into censoring and ostracizing them. And the effort has some law enforcement officers, notably New York State Attorney General Letitia James, plus the Biden White House, on their side.

“Beginning on August 23, despite the threat of chief law enforcement (officers) in 17 different states, both Google and Yelp began the process of defaming and censoring pro-life pregnancy centers through misleading consumer warnings as well as wiping them off the map function so women who think abortion is their only choice could not find them. At the same time, Google raised Planned Parenthood to number 1 in all organic search results for keywords related to abortion, giving them millions of dollars worth of free advertising,” CompassCare said in a public statement.

“Big tech conspiring with the political elite to silence any who differ with their ideology is a classic fascist move, destroying anyone who gets in their way,” CompassCare CEO Rev. Jim Harden said in the statement. “Our only objective is to protect all people equally, both mother and child. If a benevolent goal like that is a threat to those in power, what kind of mania is driving them? This is truly the pro-abortion Kristallnacht.”

“To learn more about the AG antitrust legal strategy to protect a woman’s ability to choose the support of a pro-life pregnancy center and not just abortion, contact their offices,” CompassCare said.

A lengthy timeline provided by CompassCare details when pressure was applied to the tech companies, when they complied, and how effectively anti-abortion groups were made invisible on maps and in searches. Google on Aug. 25 detailed “extra layers of verification” increasing the likelihood that pregnancy centers would be flagged for allegedly being misleading or inappropriate.

The attorneys general of 17 states warned Google in an open letter on July 21 that the company might, if it continued censoring anti-abortion groups, be held in violation of antitrust laws.

“We, the undersigned Attorneys General, are extremely troubled by this gallingly un-American political pressure. We wish to make this very clear to Google and the other market participants that it dwarfs: if you fail to resist this political pressure, we will act swiftly to protect American consumers from this dangerous axis of corporate and government power,” the letter said.

“We cannot imagine a potential antitrust violation more odious to American ideals than the deployment of monopoly power to suppress the expression of a particular idea, done at the behest of government actors. Because of the fundamental American values at stake here, if you comply with this inappropriate demand to bias your search results against crisis pregnancy centers, our offices will (1) conduct thorough investigations to determine whether this suppression violates the antitrust laws of the United States and our states.”

The timeline details how government and pro-abortion groups have joined forces to defame and suppress abortion opponents and those working to help women who choose not to have one. And the pressure has continued steadily since and despite the July 21 warning from the state attorneys general.

CompassCare spokesman Isaac Harden said the group and its allies had a team of 30 lawyers and legal experts with various projects in the works. “But the attorneys general have the resources. It would be ideal if they pursued this cause.”

Here are some excerpts:

—On Nov. 4, 2021, Planned Parenthood posted on its website: “Crisis pregnancy centers (also called CPCs or “fake clinics”) … look like real health centers, but they have a shady, harmful agenda: to scare, shame, or pressure you out of getting an abortion, and to tell lies about abortion, birth control, and sexual health. There are a lot of these CPCs in the U.S … exposefakeclinics.com … and The Fake Clinic Database can help you figure out which clinics in your area are crisis pregnancy centers.” This statement constitutes defamation, CompassCare alleges.

—On June 29, 2022, the president of NARAL, Mini Tammaraju, was quoted in a release by the New York attorney general’s office: “Google is the first place many people will turn to find out what care they have available to them … We thank New York State Attorney General (Letitia) James for leading this effort to ensure everybody looking to access care … can find that information without being misled by dangerous fake health centers.” This constitutes defamation of a competitor, CompassCare alleges.

The government and the press picked up the gauntlet.

—On June 22, the New York Times said in a story, “For years, abortion rights advocates have called on Google to stop allowing crisis pregnancy centers to run misleading abortion-related ads on the search giant’s platform … In an email, a Google spokesperson said that protecting users from harmful and misleading ads was a top priority.”

“CPCs exist solely to intercept and dissuade pregnant people from making fully informed decisions about their health care … Including these organizations in a list for an individual seeking abortion services is dangerous and misleading … This issue continues to persist in some New York regions, providing misleading information.”

And, “New Yorkers, and others traveling to the state, should trust that Google Maps will provide accurate information and direct them to real and safe care … By relying on Google’s search results in these cases, individuals are unknowingly directed towards dangerous situations and harmful experiences … Attorney General James warned Google to immediately address the misinformation.”

And censorship has taken place:

—On July 12, Senator Elizabeth Warren called for the shut down of pregnancy centers: “In Massachusetts right now, those crisis pregnancy centers that are there to fool people who are looking for pregnancy termination,” she told a television reporter. “We need to shut them down here in Massachusetts, and we need to shut them down all around the country. You should not be able to torture a pregnant person like that.”

Pregnancy centers have faced more than wars of words or legal procedures. A shadowy group called Jane’s Revenge, which uses a website based in Italy, took credit in a “communique” posted June 15 for the Buffalo attack and numerous others on pregnancy centers across the country.

“You have seen that we are real and that we are not merely pushing empty words. As we said, we are not one group but many. You have seen us in Madison, WI, Ft. Collins CO, Reisertown MA, Olympia WA, Des Moines IA, Lynwood WA, Washington DC, Asheville NC, Buffalo NY, Hollywood FL, Vancouver WA, Frederick MA, Denton TX, Gresham OR, Eugene OR, Portland OR among others, and we work in countless locations invisibly.”

“Your thirty days expired yesterday … We promised increasingly drastic measures against oppressive infrastructures. Rest assured that we will, and those measures may not come in the form of something so easily cleaned up as fire and graffiti … Eventually your insurance companies and your financial backers will realize you are a bad investment.”

At least 67 pregnancy resource centers have been attacked since the Dobbs opinion leaked in May, according to CatholicVote.org.

“Jane’s Revenge is emboldened by the inaction of our governor, our attorney general, and our majority Democrat legislature,” said New York state Sen. George Borrello, a Republican, at the CompassCare center’s defiant reopening on Aug. 1. “Someone has to die before the progressives think it’s violence.”

On July 13, more than a month later, they asked the center to sign a release allowing them to share a copy of the security footage with the FBI for forensic analysis. A center executive did so the same day. CompassCare CEO Jim Harden met with police on July 14 to view several printed screen grabs of the footage, but police refused to let him view the security footage itself.

Police didn’t make their first public statement on the investigation’s progress until Aug. 1, nearly two months after the attack. Harden met with the FBI agent assigned to the case on Aug. 17. The agent told him the agency was considering but had not yet begun a height analysis on a suspect captured on video. On Aug. 19, Amherst police once more refused to return CompassCare’s security footage.