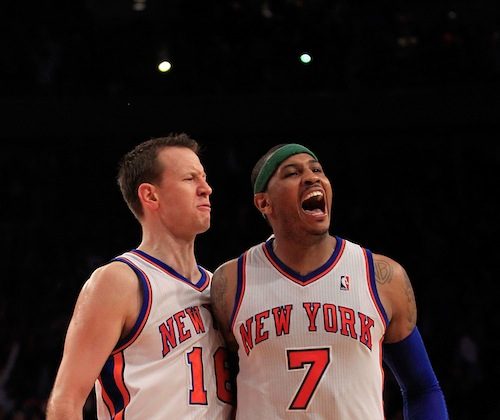 Carmelo Anthony (R) hit both the game-tying three-pointer in regulation and the game-winning three in overtime, finishing with 43 points. (Chris Trotman/Getty Images)
NBA

Carmelo Anthony hit the game-tying three-pointer with 11 seconds left in regulation and then followed that with the game-winning three-pointer in overtime with just eight ticks left to lead the Knicks (29-27) to a 100–99 win over the conference-leading Bulls (43-14).

Anthony finished with a game-high 43 points on 16-for-31 shooting, including 4-for-5 from three-point land.

New York’s win is their second straight overall and the 11th in their last 14 games, keeping them ahead of Milwaukee for the eighth and final playoff spot in the Eastern Conference.

Anthony himself has been on fire of late. The team’s leading scorer has averaged 29.9 points per contest in his last seven outings.

On the other side, Chicago point guard Derrick Rose led the team with 29 points in his first game since March 12. Rose, who had been out with an injured groin, started miserably, scoring just six points in the first half, while turning the ball over five times and missing five of his six shots from the floor.

The Knicks, in turn, took full advantage, starting the game on a 27–6 run, and led the entire first half.

Chicago, which still has the best record in the NBA, eventually caught up and tied the game late in the third quarter. By the fourth, they looked in control, leading 91–81 with 3:45 remaining.

But the Knicks clawed back, starting with a J.R. Smith three-pointer that cut the lead to seven; then Anthony converted a pair of layups to cut it to three with less than a minute left. Smith finished with 14 points but hit just six of his 22 attempts from the floor.

With 27 seconds three-point specialist Steve Novak missed a game-tying three-pointer left that rolled around the rim a few times before coming out but then Derrick Rose missed both free throws after the Knicks fouled, giving New York one more chance. Anthony took full advantage of the second opportunity hitting the three-pointer in rhythm to tie the game with 11 seconds left, bringing the crowd to its feet.

Chicago had one last chance to win it in regulation, but Rose missed a 22-footer as time ran out.

In the overtime, the Knicks fell behind again and trailed 99–95 with 2:50 remaining, but just like in regulation they got stops at the defensive end of the floor down the stretch and Carmelo Anthony provided just enough offense to win.

First, Anthony’s layup with 1:04 left cut the deficit to two points and after a steal by J.R. Smith New York got off four shot attempts, thanks to three offensive rebounds, with Anthony finally connecting with a three-pointer for the lead with just eight seconds left.

The Bulls again had one last chance to win at the end, but again, New York’s defense got the stop, forcing Rose into an off-balance jumper at the buzzer that was off.

The Knicks next game is Tuesday against these same Chicago Bulls.