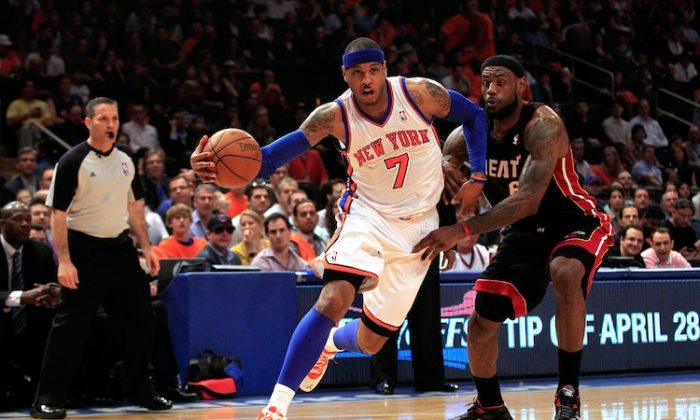 Carmelo Anthony scored 42 points Sunday afternoon at Madison Square Garden but it wasn’t enough as Miami (42–17), led by the “Big Three” stars Dwayne Wade, LeBron James, and Chris Bosh, pulled away in the fourth quarter to defeat the Knicks (31–29) 93–85.

Anthony, who’s averaging 30 points a game over his last 11 contests, also had team-highs of 9 rebounds and five assists but was 1 of just 2 Knicks to score in double-figures.

The loss leaves the Knicks still two games ahead of Milwaukee for the eighth and final playoff spot and drops them a half a game behind Philadelphia for the seventh spot in the Eastern Conference.

Miami, which has already clinched their division title, had almost as unbalanced of a scoring attack as New York did, having just their “Big Three” reach double-figures, though the Heat are built that way. Wade, James, and Bosh all average between 17 and 27 points per game for the season, while no one else puts up more than 10.

The Heat converted some early Knicks turnovers into quick transition baskets and led by as many as 11 in the first quarter before the Anthony-led Knicks came storming all the way back in the second period. Anthony, who scored 22 first-half points, scored the Knicks last 6 points of the first half and gave them a quick lead before a pair of LeBron James free throws put Miami up at the break 46–44.

James finished with a team-high 29 points and grabbed 10 rebounds but turned the ball over six times.

Miami, which is an NBA-best 25-4 at home this season, came into the game with a surprisingly ordinary 16-13 mark on the road.

Anthony started off the second half for the Knicks by hitting another jumper and it appeared that New York, which had won 13 of its 17 games under new coach Mike Woodson, would run right past the seemingly vulnerable Heat.

Instead the Heat clamped down on defense, holding the Knicks scoreless for more than four and a half minutes as they built a nine-point lead late in the quarter, prompting a timeout from Knicks coach Mike Woodson.

Whatever Woodson, a defensive coach who formerly led the Atlanta Hawks to the playoffs three straight seasons, said seemed to spark the Knicks to a 15–4 run giving them a 73–71 lead early in the fourth quarter.

Knicks guard J.R. Smith hit a pair of 3-pointers in the quick spurt, while 3-point specialist Steve Novak hit another. Smith finished with 16 points in the game; Novak had six. Still, Miami’s star power was too much down the stretch.

Heat stars Dwayne Wade and Chris Bosh combined to score Miami’s first 10 points of the fourth quarter as the Heat went on a 12–1 run to take an 87–80 lead with just over four minutes remaining that prompted another timeout called by Woodson.

Wade finished with 28 points and nine rebounds but turned the ball over six times, while Bosh contributed 16 points and pulled down a team-high 14 rebounds as the Heat coasted the last four minutes en route to victory.

Up next for New York is a Tuesday game against Boston at Madison Square Garden.